I can’t believe that the Fourth of July is already upon us again! This year, we get the whole week-end to enjoy, with the actual holiday falling on a Monday, which is why I’m wishing it for you now.

Not that I have nothing new to say this year, but yesterday’s column, that included so many topics, really took a lot out of me, so I’m repeating one of my own stories from my former column, Out To Lunch, which appeared in BeverlyHillsPeople.com. 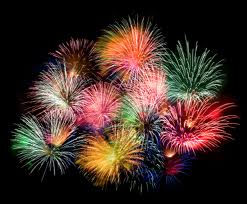 It’s the tale of my 4th of July Miracle, which happened in 2006, when I had just begun my writing career. I’ve thought of it every year since, and some people, especially in New York, often ask me to tell it to them again at this time of year. (It’s not as requested a story as some of my ones with more, shall we say, edge, such as the one about the tea witch who owns New York’s T Salon, or the bear almost eating me in Aspen, or meeting Michael Jordan and being totally disappointed, but it’s just about the only one that’s nice throughout.) So, in case you want to renew your faith in the milk of human kindness, it’s worth the read:

[I’m amending it a bit from how it appeared in BHP, to make it a tad quicker to read, but the important parts are there.]

I was in New York for the summer, and I as had predicted, none of my friends there were fun enough to celebrate. I love them, and they’re sociable at other times, but not this holiday.

My mother and I had started off the day with brunch with her friends; a lovely start to any holiday.

Everyone told me that the big thing to do in New York on the 4th is to go shopping, which sounded strange, but when in Rome… So I tried, but Kings Highway, a big shopping district, was a ghost town. What were my friends thinking?!

On a previous trip, I had discovered the best ice cream in the world at the Brooklyn Ice Cream Factory, under the Brooklyn Bridge, which is my favorite structure, by the way. Always fascinating. I begged my little mo to go there with me, but even my own mother deserted me! This day was making me want a twin even more than I already do. (Or just a visit from a more fun pal, like Rhode Island’s Ronnie Hazel, Jr. or Ohio’s Sheila Tracy.)

So, I ventured to the Bridge on my own, figuring everyone would be in Coney Island (the other side of Brooklyn) for the fireworks. Two minutes into the trip, I realized I was starving and felt weak, and couldn’t get to the fabulous ice cream fast enough.

When I got to the area, it was a zoo. Turns out, all of Brooklyn (and Jersey, Philly, etc.) gathers there because its giant deck is the perfect place from which to watch the Macy’s fireworks! Who knew?!!! (Everyone but me, apparently.)

All the cops were unusually nice, and by some miracle, I got to park right in front of the River Café, which is adjacent to the Brooklyn Ice Cream Factory, which is on the deck. I couldn’t believe it! (And neither can the Nervous Nellies of New York, who say you can’t park anywhere, anytime.) 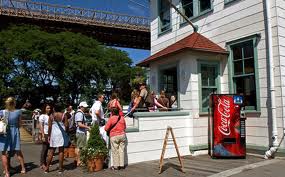 It was now 8:55PM, and I ran around to the front of the ice cream bungalow, thinking I’d grab a cone in time to watch the show. Then the reality hit–there was a line of about sixty people! And to make it worse for me, everyone seemed to have friends or family with them, which made me a tad lonely, although I knew I didn’t need another person to help me eat or see.

I talked a little to the guy behind me, Jorge, though we didn’t even do names at the time. His girlfriend, Sophia, showed up and told him that she thought they had just vanilla left. I overheard and gasped, “Oh no! I have to have Peaches and Cream!,” and went on for five minutes about how delicious it is.

I finally got to the door at 9:25, just as they were about to close it, and the fireworks started. Everyone in front of me crushed into the place, but I made the executive decision that, although I was starving, craving the ice cream, and could make it through the door, the fireworks were more important because how often am I going to get to see the Macy’s display in person? And so close-up? 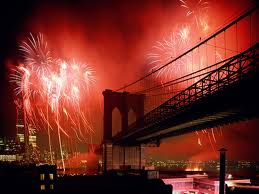 So, I very reluctantly dropped off the line, allowing Jorge and Sophia to enter in my place, and stood on the top step of the stoop to watch. The girl next to me, Faith, said she was desperate for ice cream and that she was the first to get shut out. I was telling her my journey there, and that I had to give up the ice cream I had dreamed of since April, when I saw her look behind my back and gasp.

So, I turned around and saw a cup coming toward me and heard someone say, “Peaches and Cream.” It was Jorge, who had gotten inside and surprised me with it!!! I couldn’t believe it! I thanked him profusely and tried to re-imburse him, but he just walked off into the night. A truly kind, generous stranger! I said, “A Fourth of July miracle,” and started crying, (as I’m doing now even writing about it.)

Faith said, “Don’t cry, you’ll get me started, too.” I said she must share my good fortune. At first, she protested, knowing how much I wanted the ice cream, but I insisted. I knew how much she wanted it, too. So, we got an extra spoon and happily chowed down. Sharing it made it taste that much better. And I’m a firm believer in paying it forward.

Then Lahsen, one of the managers, came out, and gave us cards for a discount on our next visit. He lived up to it, and more, when I returned two days later with my mother. He gave me a taste of the ice cream as it was being made, before it’s frozen. I don’t even love vanilla ice cream, but this was the best substance I’ve ever tasted!

Later that week, I was perusing a Reader’s Digest of my mother’s. It said New York is the most polite city in the world. I would not have believed it if it weren’t for my true Fourth of July Miracle.

I WISH YOU ALL A VERY FUN, AND SAFE, FOURTH OF JULY WEEK-END! See you back here on the 5th. 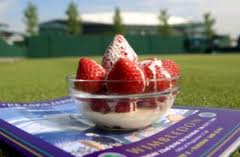 [By the way, if you were looking for my strawberries and cream recipe from last year, here’s the link: https://www.itsnotaboutme.tv/news/2010/06/21/sports-wimbledon-2010/. Just don’t forget to get the berries ready tonight, to have in time for Breakfast At Wimbledon the next two mornings. This is the first year that I’m really not interested in either final, but I know that I’ll be keeping my tradition alive, if only as an excuse to eat this caloric once-a-year treat.]