Here we have arrived at yet another Fourth of July. It’s kind of weird to celebrate it in the middle of the week; almost every other day of the week it could fall on gives us at least a three-day week-end, but middle of the week gives us nothing, unless we take the whole week off to vacation.

I’ve told you guys before, on this holiday, of my Fourth Of July Miracle. Since I was just at the site of it a couple of weeks ago, the Brooklyn Ice Cream Factory in New York, the story is fresh in my mind. So, if you haven’t read it before, this is one that I think is worth the read. It actually always chokes me up. Here’s the link to last year’s column, which re-tells the original story: www.itsnotaboutme.tv/news/2011/07/01/holiday-happy-fourth-of-july-week-end 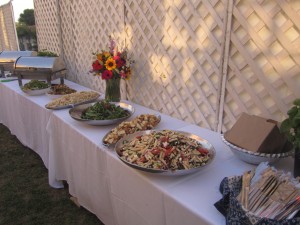 But this year I have another fun event to tell you about. And let me tell you, it couldn’t have come at a better time! For the past dozen or so years, (give or take a few recently,) as soon as summer begins, I look forward to this wonderful party thrown by the owners of Back On Broadway and Back On The Beach, Fred Deni and Jim Crystal. But this year, I was so stressed by the happenings in New York last month that I totally forgot that July was approaching! So I instantly felt better when I saw my invite to their pre-Fourth of July BBQ. It’s the one party all year that Mr. X doesn’t even fight me on going to! It’s just such a perfectly-paced, easy-going, generous, and delicious time. And Fred and Jim couldn’t be better hosts. 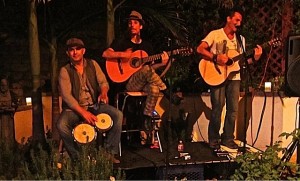 Photo of The Elian Project by Raybuk.

The main features stay the same, but there are always different twists. The twist this year was wonderful post-fireworks live music by The Elian Project, whose style is a mix of several latin beats. Mr. X even managed to krump to it, to the delight of the assemblage!

This indoor-outdoor extravaganza had a spot-on set-up, with drinks and music on the patio, appetizers in the airy interior, the dinner buffet set-up on one lawn, and the dining tables on another. And there’s a darker downstairs room with a clubby feeling, set-up for dancing and chilling. (And getting away from the few kids who the guys were kind enough to invite! No, I’m not a child-hater; sometimes you just want to make your own noise.)

After dinner came the raisin d’être for the fete to begin with–the fireworks staged by Santa Monica College, which was just up the block. [Note: that city does their fireworks on the Saturday night before the Fourth, just to avoid incidents that used to go on back in the day. First they tried doing them at 5AM on the morning of the actual 4th, but they found problems with that, too, so this is their concession.] 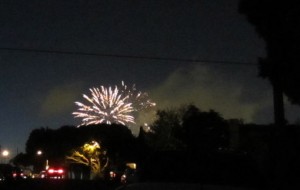 The more fun ones in the group, such as moi, usually walk right up to the college and watch them up-close and personal. But this time, Mr. X and I were having so much fun that time got away from us, so we just joined the main body of guests and watched right from the street in front of the property! What a treat that was, to not have to move a muscle to get to see fireworks!

Speaking of treats, the biggest one of all always comes when we return from watching the patriotic display, no matter from which vantage point. Fred and Jim always mix-up the dessert theme, but this time it was a professional ice cream bar! We had our choices of six flavors, two hot syrups, and tons of toppings. Let’s not forget as much whipped cream as one could desire! What a bonus for me! An ice cream bar is so simple, yet so appreciated. It turns everyone into a kid.

Throw in some fun guests, of all ages and persuasions, and you have the perfect summer soiree, which doesn’t surprise me at all because I often use Back On Broadway catering for my own gatherings.

Going to this one also provided peace of mind for me because now I don’t really care about making plans for the actual holiday because I don’t think anyone can top this one! (And the rest of my pals aren’t fun enough to do anything special anyhow.)

I wish you all as fun a day and night as I just had. And of course, a safe one! Happy 4th!