Trending
You are at:Home»Uncategorized»MISCELLANEOUS: HAPPIER AUGUST UPDATES
By Karen Salkin on August 10, 2011 · Uncategorized

So, I’m in New York now, and have been for the past two weeks. My precious little mother gave us quite a scare, but, knock on wood, she appears to be on the mend. 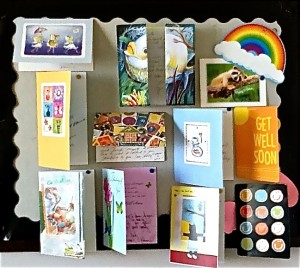 She’s still in rehab; not the kind that Charlie Sheen and half of Hollywood needs to be in, but the physical kind that people have to be in after lying in a hospital bed for awhile.

I really want to thank everyone who sent cards, emails, well wishes, and even good thoughts.  It’s all really meant a lot to us.  And to the people on both coasts who’ve really been there for us, especially the ones who’ve been picking up the pieces here in New York, I really appreciate everything you’ve done.

I’ve learned a lot from this experience, such as that a family member should always sleep in the hospital room with their loved one, but I’ll tell you guys all about it when it’s finally over. In case you need the advice before that though, the one very valuable lesson I can pass on to you is: don’t let the medical personnel push you around. Remember, they’re not the boss of you!

The other good news, besides that my mother appears to be out of the woods, knock on wood again, (think I’m superstitious much?,) is that I’ll be publishing new columns again. I don’t have time yet for daily ones, but I’ll get to as many as I can, beginning, I think, with Celebrity Sightings later on this week.

And I’m due to be guesting on an internet “radio” show in the next couple of weeks, so I’ll give you that information, as well, in the hopes that you can take the ten minutes to listen for my gossip.

At the moment, though, my main gossip is about what nurse said what to what aide in Coney Island here. Let’s hope it gets better than that before my appearance on the show. Knock on wood. Duh.