Every day we read another rumor about who’s going to be the next American Idol judge.  But now, if any of them are true, the producers are just going crazy.  The show is becoming about the judges, not the contestants.

When the series began, we had Simon and Randy, two music producers, and a dancer who can’t really sing but definitely knows about performing, Paula.  Even though Paula is nuts, and Randy has nothing special to say, it was a good panel; each one had his or her place.  They were all knowledgeable enough, and for controversy and drama, we had a nice nut, a curmudgeon, and, well, Randy. 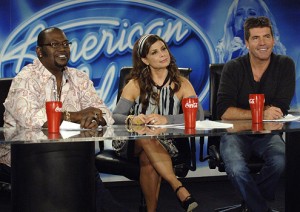 The original, and best, judging panel on AI: Randy, Paula, and Simon.

It got extra nutty when they added Kara, who had nothing to say except the word “artist” over and over again, with her little affected lisp.  But at least she could really sing and write.

Then they hit a low point with Ellen Degeneres, who was at times amusing, but had no music biz experience, doesn’t even attempt to sing, and had nothing to add except a few jokes, which is not what this show is supposed to be about. If she wants to judge something, let her be on Last Comic Standing, especially because it’s no more, if you get my drift.

They finally got some star power on the panel with JLo and Stephen Tyler, but all the latter ever said is “that was over the top,” erroneously thinking that was a good thing.  JLo, while far from the finest vocalist in the world, at least was straight with the kids.  And it was always fun to see her different styles.

We still don’t know why those two really left, and now, here we are again, trying to find a new panel.  But, if rumors are true, rather than finding people to fit in, (outside of Mariah Carey, who’s a great choice,) the producers are losing their original focus.  Mariah should be excellent because she sure can sing, has that something special, and she must have some fun things to say if she can keep funny-man Nick Cannon interested.

But the newest purported candidates are just sickening.

I hope these crazy American Idol rumors are just that, for several reasons. It’s been suggested that this year, they’ll have an all-black panel! That would be disastrous for them. While it wouldn’t matter to me, or most viewers in big cities, the bulk of the country would go berserk. Nobody would watch anymore, unless the show moved from Fox to BET. As with all shows in that genre, we need a mixture of experiences, both in the contestants chosen and the judges.

And why would the powers-that-be even consider crazy (and creepy) Kanye West and lunatic Nicki Minaj? As rappers, they’re niche performers who wouldn’t have the slightest clue of how to tell contestants to sing! They can’t do it themselves, so who are they to judge others??? Can you just imagine non-singer Kanye West critiquing superb Joshua Ledet? It should be the other way around!!! or Nicki Minaj telling unbelievable young singer Jessica Sanchez how to hit notes??? Puh-lease.

Ugh to the whole debacle.

They need to hire some new people quietly; perhaps behind-the-scene types whom the general public had never heard of, like they did with Simon and Randy. If the new hires are interesting enough, they will be fine; we really all tune-in to hear the singers, not the judges. Those fools just get in the way. Simon was the only interesting judge they ever had, and now, as head honcho on The X Factor, even he’s just a parody of his former self. No ones cares anymore.

Just like they did with adding producer Jimmy Iovine as an in-front-of-the-camera mentor, that’s the kind of “advice” they need on the judging panel, whether we agree with it or not. He’s usually brief and to the point, and more often than not knows what he’s talking about.

In my humble opinion, they need to just get on with it. I think they’re dragging it out, and leaking all these supposed possibilities, just to generate interest in the waning show. They need to re-sign Randy Jackson, as nothing as he is, for familiarity’s sake. I think they really have signed Mariah, which is a big enough deal. People are fascinated with her; especially because of that weirdness years ago, the audience will be on edge to see if the stress of juggling the show, her marriage to someone else involved with talent competition TV, and twin babies, causes her to suffer another nervous breakdown. She’s exciting enough as a new judge.

That’s two people of color, with one of them being female. So, they need another male, and this time a white one. I would say look into another ethnicity, like they did with Jennifer Lopez, but then there would be no Caucasians at all, and that would anger many.

So, to sum up, keep Randy, publicize Mariah, and get a white male. Josh Groban, my mother’s favorite, would be perfect: he can sing his butt off, is from a totally different genre that’s still very relevant, (which I’m sure some of the contestants want to get into,) and is lily-white. Or how about Brad Paisley? He fits all the bills and is pretty amusing, as well. Or, for pure prurient interest, there’s always Randy Travis! How whacko would that be???

Wow, they should pay me for my consulting services! I’m happy to help them out, if they would just stop the nonsense and do what I say. And if they want a fourth judging panel member, I’d be happy to join and represent the viewing public. Now, that would be a hoot, don’t ya think?