Trending
You are at:Home»GOSSIP»GOSSIP:GOSSIP SITE STORIES
By Karen Salkin on March 18, 2010 · GOSSIP

As someone who, in recent years, was a writer for People.com’s celebrity news section, I’m very familiar with the subject, and just how the word gets around. When that site joins in the fray, it’s usually true because they appear to do a good job of checking for veracity. (I was the only writer on duty when Heath Ledger died, and I’m the one who told them about it! I heard it on CNN, but they did lots of checking before they believed the story 100%.)

So, here’s my take on some of the true or not stories from gossip mags and sites, including the two about female Oscar winners with recent marital strife: 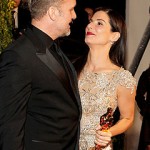 –The saddest one by far is the story of Jesse James cheating on Sandra Bullock. To me, it does have the ring of truth. But why do these pig women have to go public with these spiels??? Just keep them to yourself. Do they think that telling these tales is going to get the guys to want to be with them? Of course not! Actually they all do appear dumb enough to think so. If they liked the guy enough to engage in affairs with them, why want to hurt them? Or more importantly, their loved one? I just don’t get it. Plus, they make themselves known as even more of a skank than they were perceived to be before their allegations. Obviously, they’re just after the money and infamy, so why am I even trying to figure out the minds of douche bags?

In the beyond disappointing case of Sandra and Jesse, this is how I think the James Gang should handle it: [Note: These aren’t my usual jokey ideas; I genuinely feel for her.] If they want to stay together, they have three options for saving face. 1) Say that they were, indeed, separated when she was on location filming The Blindside. That’s only sort-of a lie because they were separated…by distance. Just say that they kept it quiet then, to not disturb the filming, but have since reconciled. Or 2) Say that they had a pact back then that they can sleep with others because they have physical needs and would be apart for so long, and so she knew about it, and it meant nothing. Or 3) Say that they were experimenting with open marriage because Monique and her husband recommend it.

Or best idea yet, she should leave his sorry-ass immediately, and never look back!

No matter what, the whole situation is just so sad, especially because Sandra’s been on all the talk shows, including being Barbara Walter’s last guest (on her Oscar night specials) singing the praises of her husband and their marriage. The quote that’s been ringing in my ears since the story broke is the one from her Golden Globes win, where she said something to the effect that until she met Jesse, no on had ever “had her back” before. Ouch now. Cheating on her is just the opposite! If that’s “having her back,” how will she ever trust anyone ever again?!

In addition to being hurt terribly, and now being miserable, disappointed, and heart-broken, if this story is true, she has to be humiliated. But why did she trust a tattooed biker to begin with???

[Note on this one: how soon until attention-hungry Anne Hathaway “reaches out” to Sandra over both being involved with low-lives? There’s a new best friendship just waiting to happen.] 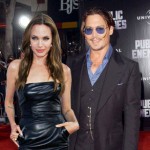 –One of the stupidest stories around is that Johnny Depp’s longtime girlfriend and mother of his children, with whom he seems to have an almost supernatural love affair, has begged him to drop-out of his film with Angelina Jolie because she’s afraid the two stars will wind-up together. First of all, and most importantly, look at Johnny and look at Brad–would Angie leave her gorgeous, intelligent, caring guy for a weirdo who had a gold front tooth (or teeth, I can’t bear to look to know the answer) put in for a role??? As insane as some of you thinks she is, she’s not that crazy! And I also view Vanessa Paradis as the most secure girlfriend ever. So, I think both couples will stay put.

BTW–Brangelina is my third favorite couple, right behind No. 2 Mariah Carey and Nick Cannon and No.1–Mr. X and ME!!! 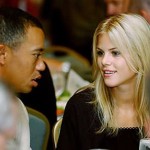 –I still don’t know why Tiger’s wife is sticking around! Some think it’s “for the sake of the children,” but what kind-of message does that send them, especially when they get old enough to comprehend the situation??? The girl will think it’s okay to accept behavior like that in a spouse, and will have trouble in her own relationships, and the boy will think he can get away with anything and it’ll all be good. Didn’t Tiger’s father cheat on his mom? Look how well that all worked out for his family.

It boils down to this: he’s a creep and she’s nuts. In long relationships, I can see forgiving one little sexual fling, or maybe even an affair where the guy actually thought he was in love with someone else, but then realized that his spouse was really the one for him. But Tiger’s indiscretions were just way too many and downright nasty. How can Elin ever have sex again with what must be an STD incubator by now? I shudder just imagining it. (Actually, I shudder at the thought of having sex with that boring robot anyway.) This is another one I’m just scratching my head over. 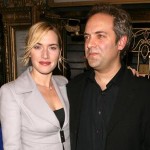 –Last, and really least, as well, there’s the break-up of the marriage of Kate Winslet and Sam Mendes. Word is that they were “bored.” So, good for them for knowing that! A bored couple getting a divorce! Wow, what a news story!

And, just for the record, as much as I’ve always dreamed about receiving an Oscar, (although my acting roles would probably prohibit that anyway,) I’d rather stay with Mr. X forever than anything else in the world. And all these sad break-up stories make me glad that he doesn’t get out much!