Trending
You are at:Home»GOSSIP»GOSSIP: WHY IS KATE UPTON CONSIDERED HOT?
By Karen Salkin on November 19, 2013 · GOSSIP

WHY IS KATE UPTON CONSIDERED HOT?

I just don’t get it. At all. Kate Upton seems like a nice enough girl in interviews, and she’s always pleasant, but I see tons of better-looking girls her age when I’m just driving down the street in L.A.! 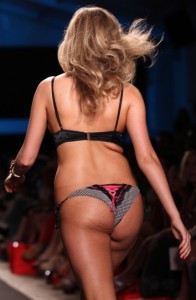 Kate Upton on a runway earlier this year. Notice the back fat and saggy butt.

I’ve noticed for several years now that models are not always really good-looking, so her being hired is not news to me. But the fuss surrounding her is. Yes, I’m glad that a heftier female is getting so many modeling gigs, as opposed to the usual string-beans who make clothing look nothing like it does on most people, so I applaud that fact.

But do people really think she’s great-looking??? She’s basically plain, bordering on chubby. She has droopy boobs and neck fat! At twenty-one! She looks like the “before” in a story of a corn girl going to the big city and getting a make-over!

I do know that looks are far from everything about a person, but that’s pretty much the most important factor in modeling. Duh. So, just who is hiring this girl? 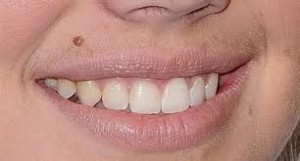 It’s not just her weight or un-toned body I’m referencing; just look at that ‘stache!!! And yellow-ish teeth.

And, seriously, I hate ragging on someone’s looks, (in public anyway; just don’t ask Mr. X what I say in private,) but you know you’re all thinking it, too! Especially if you saw some of those photos this past week-end, from her solo basic shopping trip. (She didn’t look great.)

When I was a teen-age model, (which I did through my twenties, as well,) I even questioned why I got hired so much, with a nose that was far from petite, (even if my 100 lb., 5’6” body was.) I thought models had to be perfect. Now I realize that they don’t anymore, but they at least have to be somewhat “special” in the looks department. And Kate Upton is definitely far from that.

And that’s all I have to say on the topic, really. Who agrees? Or not?