Trending
You are at:Home»GOSSIP»GOSSIP: MY CASTING COUCH EXPERIENCES
By Karen Salkin on October 20, 2017 · GOSSIP

Since Harvey Weinstein’s sexual harassment of young things in Hollywood is the big topic of the past few weeks, many people are wondering why abused females have kept quiet all these years.  Well, as someone who has suffered similar show biz abuse, but from others, I’m here to break it all down for everyone. [Note: I really hope that you’ll all read this entire article, but if you just can’t wait to see my new video telling about my most horrendous casting couch experience, here’s that link: www.youtube.com/watch?v=OYKn2_EWaJM.] 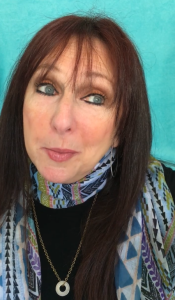 A still from Karen Salkin’s new video. Just click on the link in the paragraph right above.

There are many reasons we stay mum, but first and foremost is the fear that our careers will be over before they’ve begun.  And, sadly, that fear is exactly what the abusers count on.  And, until the recent social media craze, we really had no one to tell!!!  We could tell our friends, families, agents, and managers, but we weren’t able to get our stories out to the masses.  (For a similar situation, but in sports rather than show business, please read this, to maybe understand the serious bind we ladies were in prior to recent years, by learning of the extreme torture perpetrated on the one woman who was brave, and perhaps stupid, enough to tell on Peyton Manning: itsnotaboutme.tv/news/footballkarens-rant-peyton-manning-scandal.)

I, unfortunately, have had many run-ins over the years, mostly when I was a pretty young thing, especially when I was doing my television series, Karen’s Restaurant Revue. Every pig in the world came after me then. Some still do! I have no idea why these barbarians think they are allowed to ask me if my breasts are real!!! (They are, by the way. Why would I have my breasts done but keep my nose???) And it’s not just men in the biz. There are shameless sleazebags in every field. 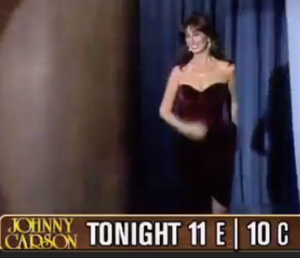 Karen Salkin on The Tonight Show all those years ago. That was one place where all the personnel were classy and no one bothered her!

Of course, if I told you about every sexual harassment episode I’ve been through, you’d be reading this one column for the next month, so I’ll just give you a taste of a few of them here, including the most egregious case, which was absolutely horrible on so many levels! (And it involved an actual couch!)

First up, when I was on my second theatrical agent, he recommended a certain photographer.  I trusted the agent because his young daughter was a working actress.  After a few normal shots, the photog tried to talk me into taking off my top.  Thank goodness even then I could not be swayed, and would never do anything like that, anyway.  He promised the shots would be tasteful, and that my arms would cover my chest, and that they were necessary if I wanted to get work in film.  I still declined, and he cut my photo session really short.  I left there wanting to vomit, but with my integrity, and virtue, intact.

But a friend of mine was not so lucky.  She was a sweet young thing who had just arrived in Los Angeles to be a singer.  I introduced her to my agent, who sent her to the same photog.  I warned her, but she still fell prey to his persuasion to go topless for some of the pix.  She cried and was depressed and fearful for months.  It was so sad to see her that way. 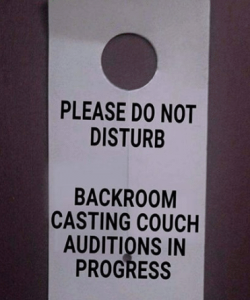 When I was a few years older, and seeing Mr. X, we were with the same big theatrical agency for awhile. When he was out of town once, doing a play, I was visiting my main agents at their offices, when one I had never met before saw me.  He introduced himself, and said we should go to dinner that night to talk about my career.  (By the way, I always chuckle over all the males who have thought they were tricking me into letting them take me to lunch over the years, especially when I was doing my aforementioned TV show.  I love going to lunch, and they were paying, and it’s just an hour of my time, and it’s always good popular restaurants, so just who was tricking whom?!)

Just to be on the safe side, I called my main agent to discuss the situation, and make sure the new guy knows that I have a boyfriend.  So, we’re at dinner, and the guy is doing “date talk,” not “business talk.”  When it got uncomfortable, I gently said, “I have a boyfriend.”  To which he repulsively answered, “So?  I have a wife!”  I almost choked on my oh-so-expensive shrimp dinner!  How creepy!  I never ate so fast after that, so we could get out of there, and my misery would be over. (I was torn between skipping dessert to get out of there sooner—he was driving—and ordering two desserts, to punish his wallet for him being loathsome! Guess which I did?)

That same situation got worse a few years later when guess what producer hired me for a guest spot on a sitcom?  The guy’s wife!  And I had to play…the mother of their real-life baby!!!  And he came around to watch me do that.  So, unfortunately, some of the hits from these show biz slimebags don’t just end with the declined pass.  They can have further repercussions, and often for years to come.

As I’m writing this, all different similar experiences from the early part of my career are coming back to me.  But they’re small potatoes compared to the big one I’m about to tell you about. 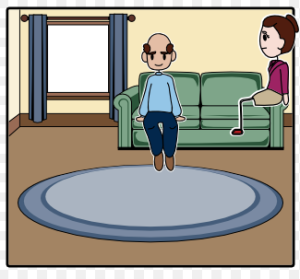 It’s way too long, and difficult, to write about, so the best way to explain it is in one of my YouTube videos.  I hope you’ll watch it for a better understanding of what goes on behind closed doors in this industry on a daily basis. (And it’s a juicy one!)

Before I give you the link, I do have one minuscule Harvey Weinstein story.  I actually met him once, on the day of the Oscars about a dozen years ago, at a friend’s screening room.  And…I got a gay vibe from him!  I was shocked when I found-out he was married.  I really did assume both wives were beards (because how could they bear to go near that repulso,) and was surprised once again when all the new allegations came out.  Surprised only that they were from women; I’m not the least bit shocked that he’s a perverted molester. (But I just realized something—should I be insulted that he didn’t hit on me??? He was a bit distracted that day, of course, and I was in a group of people in a space where I could not be alone, but still…)

One small side note: Harvey Weinstein is a pig. Period.  And absolutely guilty as hell.  And should not be allowed back into his company, show business, or even his family.  But I do have a big bone to pick with one of his big accusers.  Abused actress Rose McGowan is blaming everyone else for keeping mum, while she took money for her silence!  Lots of money!  Why didn’t she speak up rather than take a bribe to keep quiet???  Just sayin’.

Okay, here’s my horrible casting couch story, which is traumatic on so many levels.  You’ll understand when you hear the whole tale, and just who was involved: www.youtube.com/watch?v=OYKn2_EWaJM.