Trending
You are at:Home»GOSSIP/CELEBS»GOSSIP: A TRIO OF GOSSIP: HEIDI KLUM, LENA DUNHAM, BILL COSBY
By Karen Salkin on December 18, 2014 · GOSSIP/CELEBS

I’m so sick of all these topics! And people keep asking me for my thoughts on them. So, I’m going to weigh-in now, and then turn my attention away elsewhere.

Here’s the shallow one:

And what about those knees??? (This format won’t let us make this pic larger, so she looks okay in it this size, but everything looks much worse when it’s bigger.)

I’m not putting down Heidi Klum’s body here for the sake of putting down her body. I have no beef with the woman.

But, I came across this stupidity on DailyMail.com recently, (yeah, I know—I shouldn’t be reading that crap anyway, but it’s one of the few “gossip” sites I check-out,) and was so amazed at what it said, along with the pictures it showed. It was like reading The Emperor’s New Clothes.

This is what the Daily Mail article said (and the bad writing is all theirs, not mine): “She is a 41-year-old mother-of-four but Heidi Klum can still give models half her age a run for their money.  The German beauty showed off her incredibly beach body as she soaked up the sun on holiday in Jamaica with her children and toyboy lover Vito Schnabel.” (See what I mean about the writing? Wrong words, missing punctuation.)

And this is just one of the pictures that accompanied the article. Are they crazy??? This is what they call an incredible body??? (Actually, their writers are so dreadful that they called it an “incredibly beach body.”) She looks terrible!

Yes, she is at least thin. And has had four children! So, for those circumstances, she does look good. And I give her props for that.

But, in general, that is an awful body! I’m not faulting her, or anyone, for how they look. And she’s not the one declaring that her body is “incredible.” She’s just a woman on a beach vacation with her family, minding her own business, and having a good time. More props to her for that.

I’m not ragging on Heidi Klum, at all. I’m ragging on the stupidity of the celebrity press who are lauding this body. So, allow me to point-out to them, not Heidi, how bad she looks. She has a saggy butt, saggy boobs, weird crotch area, and strange, (though thin,) stomach. She just looks overall weak.

And I get it. When I was very skinny, (which, trust me, is definitely not the case right now!,) I remember that a guy friend I was at a pool with told me I was skinny. I was relieved because I really never felt comfortable parading around in a bikini. So after I said thanks, he pointed that, although he thought I looked good, I also looked weak. So, you know what? I got a gym membership that very week! So, he actually helped me by breaking it down for me.

So, my advice to Heidi is to start working-out before it all slides away under her cute wardrobe.

And my advice to the Daily Mail, and other such publications? Start reading a dictionary so that you know the meaning of the word “incredible!!!”

And here’s the one I really don’t much care about: 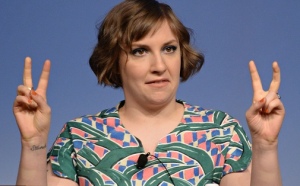 I don’t know about this situation in-depth, because every time I see this woman’s name, my mind just gets tired, and I can’t read about her, but it seems like an easy problem to have fixed before it began.

It seems that she wrote a book about her life, and included in it a rape she suffered in college. That’s a serious situation, and I would never make light of anything as sad and horrific as that. But, in her attempt to hide the rapist’s real identity, (though I really can’t understand why,) she accidentally implicated another guy at the school with her. (It appears all she did was say his name is “Barry,” and he was a Republican. Even though “Barry” is a pseudonym, I guess there was only one Republican named Barry at that college at the time, which seems kind of odd to me, but oh well.)

So this guy, whose real name is Barry, has been suffering for the two months since the book came out. And even though he’s a Republican, I feel really bad for him. To be wrongly accused of something you didn’t do, especially an act as heinous as rape, is a horrible thing to live through.

So now it appears that her publishers have apologized, and put some new message in all the books that are printed from here on out, making sure that everyone knows that was not the real guy. It does all seem like a stupid, unfortunate act, but here’s my one big question about this:

Shouldn’t someone have checked the book’s info before publishing it??? So, not only is this Lena woman to blame, but so are her publishers. How hard would it have been to call the man a totally inane name, like “Shamika,” that would’ve not inadvertently identified anyone else at the University at that time?!

And here’s the disgusting one:

Never liked the man and never, even once, thought he was funny. I guess, even with all his fame and fortune, no other females liked him, either, or else he wouldn’t have had to drug them all to have sex! 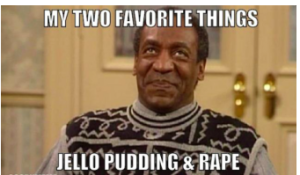 Saw this on the internet. Kind-of says it all, doesn’t it?

I believe all the rape allegations against him. Even if just one is true, he’s a rapist. Period.

I’m glad I waited to write this because there seems to new info almost daily!

Now he accuses the white media over this, and his wife is in denial. I wonder if she would change her tune if some bigwig did this to her daughter?

Camille Cosby recently released a statement comparing the accusations against her husband to the UVA fraternity rape case. (In that one, the press is now saying the girl fabricated the story, but I believe, along with many others, including witnesses, that she just named the wrong fraternity by accident.) But Camille should have really compared it to the Sandusky case!!! In that one, the pedophile coach’s wife said she knew nothing of the evil her husband was doing for all those years.

Having his career possibly ruined now is not enough punishment for Bill Cosby, in my opinion. If any of these accusations is true, (and I think most of them are, if not all,) the creep should be in jail. At least, chances are good that they’ll serve him some Jell-o in there.