[Note: Because the Golden Globes were just a few days before my birthday, which I needed strength for, I made time for only three suites honoring them. But they were the most worthwhile ones. My Contributing Writer on this one is Celia. Her comments are the ones attributed to her by name, and also the ones in quotes.]

For a girl from Brooklyn, who’s been in Los Angeles since I was in my late teens, I’ve spent an awful lot of time in Canada. Mr. X’s family lived there since I first met them, and he’s done several plays and musicals there, as well. And as a college student living in Rhode Island, I made a few trips to Montreal, which was really exotic to us! That we could come back with their famous 222 pills, which I believe was code for “codeine,” was a miracle to a girl with awful time-of-the-month cramps!

I even watched the Oscars one year on a tiny black-and-white TV, crowded onto a single bed with about ten pals, at McGill University! And when I lived in Toronto for a summer, a proprietress of a shop in Yorkville even let me buy the dress off her back! So I have only great feelings toward the entire country. Those feelings came to the surface again when I visited this Oh Canada gifting suite, which featured products from only Canada!

It was held at the gorgeous Peninsula Hotel in Beverly Hills. I always feel instantly classy upon entering the premises. 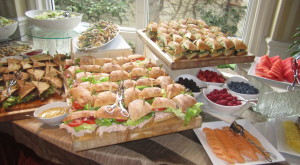 As you can probably figure, we guests of multiple gifting suites often compare notes, and the first thing everyone said when they mentioned the Oh Canada Suite was how lovely the food was. It was truly the nicest spread at a suite EVER!!! Many of the lounges are just about the gifts, with no sustenance offered, but this one fed us royally.

Catered by the venue itself, this beautiful buffet featured one of the best Caesar salads I’ve ever had, generous pasta salad with mushrooms, three kinds of hearty sandwiches, (with the turkey being my favorite,) and several fresh fruits and scrumptious cookies for dessert. There was even a beverage buffet set-up on a separate table, with an accommodating staff member serving us.

This suite featured a smaller scale of actual gifts, as it was a new entry into the genre, so having a buffet of this magnitude got us guests to linger and mingle, which made it one of my new faves. It had a classy, peaceful vibe to it, rather than the usual frantic, get-what-you-can one.

Most Canadians I’ve ever met are pleasant and likable, and these sponsors were no exception. Every single one of them was from that country. They were all in one room, right next to each other, which made it easy for us to visit them all. The suite itself was stunningly decked-out with pink flowers and white couches. An artistic touch was that all the sponsor names were on uniform signs, which lent a communal air that’s not found in other suites. Leave it to our neighbors to the north to look out for each other!

Their charity, REACH (which stands for Research, Education, and Awareness for Children with Hirschsprung’s Disease, which affects the colon in insidious ways) was represented by Dr. Allan Goldstein, a kind pediatric surgeon from Boston, (what was a non-Canadian doing there?,) and his equally nice wife. He operates on a lot of these children, so it was a stroke of genius to have him be the one to talk to us about it. For some reason, (perhaps it was their kind, honest, non-pushy manner,) I paid more attention to what they were saying than to reps of other charities at other suites. Celia’s take on it was this: “Dr. Allan Goldstein, along with a family whose son was born with the disease, established REACH in 2011. All the people involved  have the passion to educate the public about this disease.  I am aware now.  Thank you for that.” We loved that they were giving out tee-shirts with the slogan “Shit Happens.” What a great attitude for these people to have! Celia added, “I will be wearing mine to help educate and direct people to this non-profit.” www.reachhd.org

In general, this was more a “making us aware of products from Canada” suite than a “gifting” one. When I find out more about those companies, I’ll let you know. But the gifts that were given on-site were lovely. Here are the highlights: 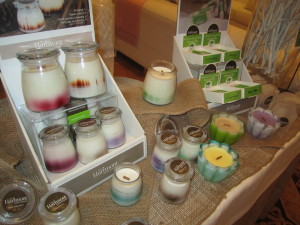 Hartmont Candle Company—We were both impressed with this “beautiful display and presentation.” Celia said, “The candles are in lovely containers that would work in any room.”  We both had the same favorite—it had “a fragrance that reminds me of the ocean.” We were happy that they also had flavored lip balms because ours were a tad chapped from licking our lips over the food there!  Celia declared they came in “delicious fragrances” and made her lips “feel soft and silky.” Mr. X has been sick since then, so I didn’t get to try my new lips out yet! Soon, though, fingers crossed! www.hartmont.com

Elman’s Kosher Pickles—We both loved that “Bite Me!” is their catch-phrase! I suggested that they put them out by the buffet for all to enjoy with the other fare, and the results were outstanding. Everyone was munching on them with lunch. Celia not only said the “ juicy kosher dill pickles” were “scrumptious,” but she gave the ladies who were repping the company her “Best Dressed Award!” elmans.ca 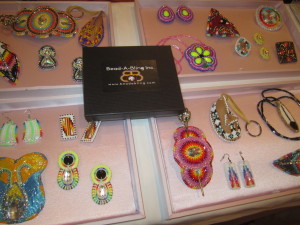 Bead-A-Bling Jewelry—Celia, an artist herself, was impressed with this “beautifully beaded” jewelry that’s “crafted intricately” by Aboriginal Peoples in Canada, with designs from their culture. There were three artisans on-site, and each had a distinct flair. They let VIPs choose his or her own piece, and a pair of hoop earrings, designed by Jessica Meeches, that looked like cotton candy, had my name on them! www.beadabling.com

Janie Jewels—This “clever jewelry made from pop tops of cans” caught Celia’s eye right away. She found the colorful earrings and “other jewelry made from found objects,” (like popped balloons!,) to be “thoughtful and charming.” I concur! www.janiejewelscanada.com

Farmery—I agreed with Celia that it was “a bit early in the day for us to taste Manitoba’s own locally grown brew,”  but she said the “bright orange container made it look inviting.” She loved that this company “also makes Skin Tonic, a handcrafted artisan soap,” and marveled that “beer and soap could be made from the same ingredients!” She emailed me about the soap, “Tried it, loved it.” The beer tasting will come on a week-end! www.farmery.ca

Wine to White—This is a wand that removes wine stains from teeth, but there were no instructions, so we don’t know how to use it! I have a feeling I’ll see the dentist whose product it is at another suite soon, so if I do, I’ll find-out the scoops then. www.wine2white.com

That’s it for the highlights of the gifts, but I have one amusing story that I just have to share. [Sidebar: people ask me all the time if I miss doing my TV show. I tell them that usually I don’t, because I can reach more people by writing, but that I do when I have a funny story to tell. This is one of those times.]

One of the sponsors was a psychic, who was headquartered in a cozy corner with an extra easy-chair for the guest she was reading. With all I’ve been through these past few years, I really wanted a reading to see what 2014 had in store for me. The woman psychic was speaking to two men who offered to cede their seats to us, (they turned out to be her pals, not guests,) but, never wanting to intrude on anyone, we said we’d come back anyway.

When we did, she said she was ready for us, but had to find a space to do the readings. We said we’d do it right there, in her assigned space. But she said she couldn’t do it there. But it was where she was supposed to be doing them!!! Whatever. She said we’d go to the organizer’s suite in the hotel, but had to get the okay. We waited while she tried to work something out, but after about fifteen minutes, she said it wasn’t going to work. Couldn’t she have seen that situation before she even asked?! She’s a psychic! (But she’s English, not Canadian, so maybe that had something to do with it.)

So, I said we could just go outside to the patio, (which was her original suggestion, but she had deemed it to be too cold.) I said it was fine because readings at events usually aren’t too long, and we’d be fine in the seventy-ish degrees that it was, especially with her heavy attire. I asked how long this one would be, and she didn’t know. Again, couldn’t she divine it, as a psychic???

I practically begged her to do one for me, and suggested many quiet areas close to the suite, but she nixed each one. I worried the rest of the day that she saw something awful for me, so she just didn’t want to tell me. (But I saw her at a party that night, and she said that was not the case. Whew!) I spoke to a few other guests of the suite over the two days, and they said that that was their experience, as well. So, being slightly psychic myself, (really–I don’t even have caller ID, and I usually know who’s calling!,) I see that she won’t be back for their next event.

But the rest of us will because Oh Canada was a welcome addition to the world of gifting suites!