GBK came up with something different this holiday season. Instead of the usual “Gifting Suite” to coincide with an awards show, they did a “Giving Lounge, ” to coincide with the holidays. What a nice idea! I was thrilled to be a part of it. 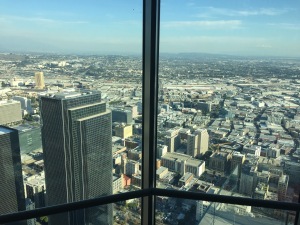 Our view from GBK’s Naughty or Nice Giving Lounge. Photo by Karen Salkin.

This is how it worked: the attendees collected the gifts, and then immediately donated them to a charity. The public also had the chance to pre-bid on being there in person, and those proceeds went to charity, as well. (More on the charities themselves near the end of this article.)

I always love the fact that GBK often changes-up their event locations. This one was held in a fabulous new entry into the party venue arena–OUE Skyspace LA in downtown LA, which features the tallest observation deck in Los Angeles. I had missed their big opening fete earlier this year, so I was especially interested in checking it out. I had heard so much about the place! But none of the scuttlebutt had done it justice. 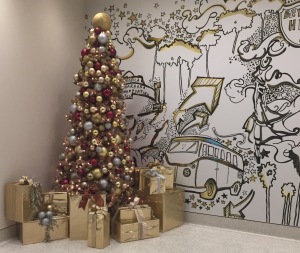 My cohort, Alice, and I felt like we were in a movie from the get-go. The first “check-point” was a TSA-esque x-ray experience, (although tons friendlier! And so much less scary, although still a tad nerve-wracking. I always think that they’re going to discover something that a stranger planted on me! Do you think I watch too many mystery shows?) Then the real fun began. We walked through an extensive hallway, which featured a lovely white and gold mural of LA along the entire length, to get to the next step. 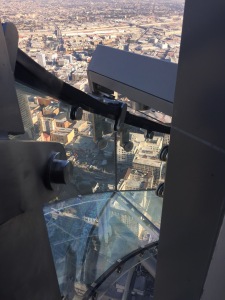 A view of Skyslide from near the top. Scary! Photo by Karen Salkin.

There are personnel who serve as “elevator monitors,” and grill you about where you’re headed. They even push the buttons for you! On one level, there’s a stunning moving panoramic video of LA, that reminded me of one of the old-time exhibits at Disneyland. There are even railings for you to hold on to, in case you get a tad dizzy while viewing it up-close and personal! It seems the Skyspace people have thought of everything!

When we finally arrived at the lounge area, the first thing we noticed is the pristine, futuristic atmosphere. It looks like the places TV detectives go to interview the mad genius scientists! (Again—too much TV for me?) 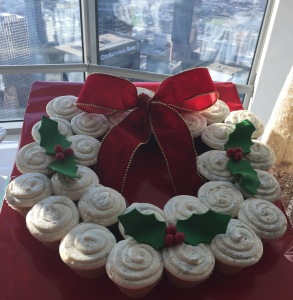 A cupcake wreath, with a hint of the glorious view we had that day. Photo by Karen Salkin.

This is how Alice described the atmosphere: “The moment we walked in, the energy was so great! There were beautiful Christmas trees everywhere; each corner was unique. Windows surrounded us, and we were able to see all of Los Angeles from wherever we stood. The decor was to the nines!”

Everyone was having tons of fun. Between the beautiful beverage bar, the delicious sandwiches provided by Ike’s Place, scrumptious holiday cupcakes, the excitement of wondering just which guests would be brave enough to go down the Skyslide, and discovering all the fun gifts I’m getting ready to tell you about, there was something for everyone. 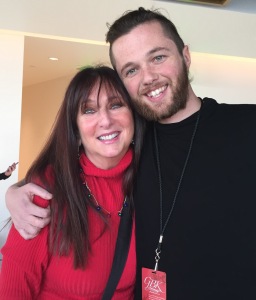 Karen Salkin with her amiable escort, Alex. It looks like they comparing light-colored eyes! Photo by Alice Farinas.

I was lucky enough to get the most fabulous escort I’ve ever had at a suite! No kidding. Alice and I had met cute Alex on the elevator, and I noticed right away just how enthusiastic and upbeat a person he is. So, when he was to assigned to help us meet and greet the sponsors, he and I were both very happy. He’s young and adorable, (and an identical twin, which I’m always fascinated by,) and when he learned that I had been a guest on The Tonight Show with Johnny Carson a couple of times, he almost jumped out of his skin! I wouldn’t have guessed that someone his age would be so familiar with Johnny, but he knew right away what an honor that was for me. And he was thrilled to have met someone who had been on that show! He wanted to know everything about my experiences on there. What a great guy. (Actually, I’m saying that about both Alex and Johnny!!!)

Alex shepherded us to the various sponsors, and here are our favorites (mine and Alice’s, not those of Alex, of course): 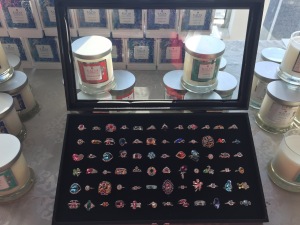 Katya Candles—These gorgeously-packaged beautiful candles are wonderful enough on their own, but they come with a surprise under the lid—a foil-wrapped cocktail ring! (It’s not hidden in the candle because the wrapping would be a fire hazard. Isn’t that thoughtful of them?) Alice said that this fabulous gift combination, (which is so affordable, you’ can get one for every female you know!,) is “beauty for your nose, beauty for your eyes, and beauty for your hand!” We had a lot of fun with the human Katya. I met her handsome boyfriend, too, and kiddingly suggested he “put a ring on it.” But he told me that, as the designer of these candles, she has more rings than anybody! Good point.  www.katyacandles.com 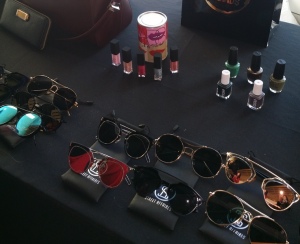 Tempt Brands—As forever fashionistas, we were more than interested to learn about this fabulous shopping site out of Canada, where everybody looks good! They feature major discounts, too. Alice said, “They have so many items to choose from, not just fashion.” She is correct—there are also beauty products, toys, and even home furnishings! At the lounge, they were featuring what Alice referred to as “the coolest, hippest, swankiest, funkiest sunglasses you’ll ever wear!”  www.temptbrands.com 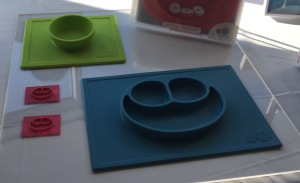 Ezpz Silicone Mats—When the rep for this company told me these silicone mats for children are “easy peazy,” I did not realize that was the name of the company! (In initial form, as you can see.) I was too busy drooling over the clever children’s Happy Mats, which are bowls and compartment dishes, that are built right into silicone mats, to catch the inevitable drips. What a genius creation. And, no fooling, folks—I’m getting one for my own grown-up messy snacker, Mr. X! Our couches will thank me! And they’ll thank EZPZ, too, of course! www.ezpzfun.com 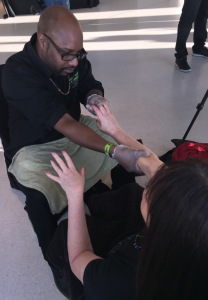 Manly Handz Mobile Spa—We had met these massage guys earlier in the year, so we knew the pampering we were in for at this suite, just when we needed it. Each guest got his or her choice of a shoulder and neck massage from Sean, or a hand or foot one from Lonnie. Since I spend so much time typing this whole e-zine for you guys, my loyal readers, I chose to have my hands kneaded, and it was excellent. I even got to lie back in a massaging chair while he relaxed my overworked phalanges. Alice was thrilled with hers, too. She told me, “I walked in with a crick in my neck, and by the time I left, I didn’t even remember I had one!” We were so glad we visited these “manly” guys last that day, so we could just slink on out of the lounge after. www.manlyhandz.com

As I mentioned at the start, this entire event was for the purpose of charity, but the specific ones who benefitted that day were: 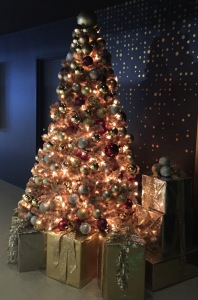 Toys for Tots—When I was doing my TV show, I was always more than happy to go on this organization’s holiday telethon, to donate toys for children in need, and to encourage my fans to do so, too. So, it was great to see the Marines’s collection boxes at this site, as well. www.toysfortots.org

Make-A-Wish Greater Los Angeles—This organization grants wishes of children with life-threatening medical conditions, and has been doing so for a long time. I’m always glad to see people helping them, so good on GBK for doing just that. www.la.wish.org