I had met Rafi a few times in the past because of his jewelry company, Bullets 4 Peace, which I was very happy to tell you about before. So to honor him at this event, his own gifting suite, I showed-up rocking my existing pretty bullet pendant! (Doesn’t that make me the coolest, most thoughtful guest there? I sure hope so.) 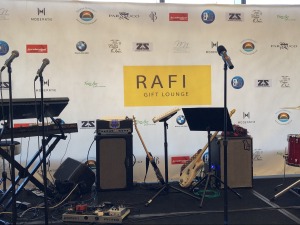 The stage. Photo by Karen Salkin, as is the big one at the top of this page.

Rafi’s lounge was held in the beautiful Waldorf Astoria Hotel in Beverly Hills. Believe it or not for a bon vivette such as myself, this was actually my very first time there in the almost-year-and-a-half it’s been open, even though it’s practically down the block from me! So I thank Rafi and his team for choosing this venue. (Being formerly bi-coastal, I’ve been to its New York City counterpart several times, of course.)

Not only was this my first time at the Waldorf, it was also my maiden voyage to this new-ish gift lounge! I believe this was only Rafi’s third event, so I’m glad that I’m still getting in early, with many visits to come. It was held in the second floor ballroom, and was spread-out nicely, with a greeting area, and then most of the gifts, and a stage, in the ballroom.

For the only time this awards season, I shared both of those firsts with my contributing writer, Noelle. It’s rare that neither of us has had a quintessential Hollywood experience before, so this whole day was special for us. Noelle says, “The ambiance at the Rafi Gift Lounge was buzzing. The huge room it was held in is stunning, with crystal chandeliers and beautiful windows. The space was bright with easy-to-spot sponsors. In the middle of the lounge, a stage was being set-up for the live music which was scheduled for later in the day. And it was jam-packed with guests!”  (Her comments are the ones in quotes throughout this column.) 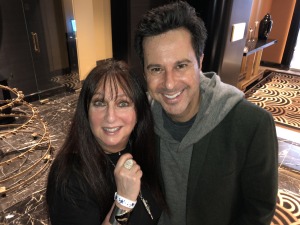 Before I tell you about the gifts, I must share my two favorite experiences here. Going backwards, as I was leaving and my old pal, Jonathan Silverman, was arriving, we bumped right into each other. I was happy to see that his face lit up as much as mine did at this chance meeting! We first met a lifetime ago, when he was a young actor and I was doing my TV show, and we were fans of each other. He even introduced me to his whole fam back then! I’m thrilled that he’s as adorable now as he was as a teen. 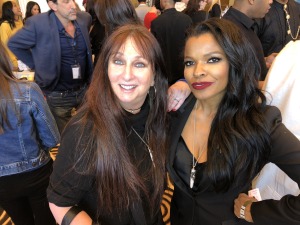 Before that, I had run into Keesha Sharp, who plays Trish on my favorite TV show, Lethal Weapon. A nicer celebrity you will not meet. I had tweeted something about her character last year and she had responded with a lovely reply. And from just that, she knew who I was at this event! And when I asked to take a picture of her, she insisted that I be in it, as well!

Just those two encounters alone made my day.

But, of course, the celebs were there for the gifts, and let me tell you—I had never seen any of these items before!!! So let’s get to the highlights of what we discovered at Rafi’s Gift Lounge: 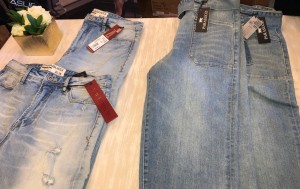 Parasuco Jeans—This was one of the most popular sponsors there, of course, because they were gifting…jeans! And not just any jeans—each pair was more hip than the one before. And even though people around the world assume that everyone in Hollywood is a Size 2, this company was kind enough to show-up with all different sizes, which made the varied-shaped assemblage very happy, I’m sure. www.parasuco.com 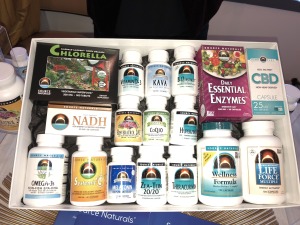 Source Naturals Nutritional Supplements—As someone who’s concerned about health more than anything else in life these days, I was thrilled to discover this line of supplements. There was something for everyone in the giant boxes they were gifting! Noelle said, “What a great gift—the gigantic box was filled with seventeen different supplements, including B-12 Fast Melts, Coenzyme Q10, a multiple vitamin, and Melatonin.” After mingling with sooooo many people during Oscars Week, I have a feeling that every guest was the most grateful for this generous gift. www.sourcenaturals.com 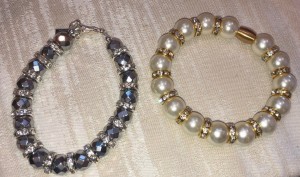 JKimm by Concrete Rain–We both “fell in love” with these affordable-yet-elegant Julie Gibbs-designed bracelets, particularly the silver hematite one, from her Classic Collection, which can be worn with absolutely everything! Noelle said of it, “The beads look like little disco balls, and have just the right amount of sparkle.” And each bracelet was gifted in a handy little burlap storage bag, so it never has to get scratched while amongst one’s other jewelry items. www.concreterain.com 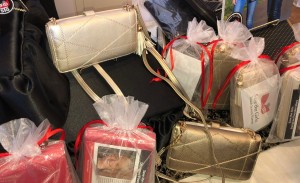 Save the Girls Touch Screen Purses—These purses are ingenious! You put your phone in the clear pouch, to protect it, while still being able to use the touchscreen without removing the phone from the purse! I’m sure we all wish we had one right about now, with all the rain in LA! That feature is consistent throughout the many choices of purse style and color. Noelle points-out that they also feature “a crossover strap, (which make it ideal for events such as this one,) along with slots for your cards, and even a small pocket that will fit your keys and favorite lipstick.” As if all that is not wonderful enough, this kind company donates ten percent of their profits to breast cancer research. Talk about a win-win!!! www.savethegirls.com 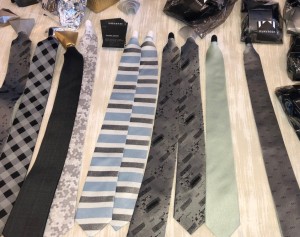 Modern Tie—Noelle explains these fabulous magnetic neckties so perfectly, that I’m going to have her tell you all about them. She says, “What a great concept! You get to wear an attractive tie without the hassle of having to actually tie it!  The first piece is a topknot which you attach to the top button of your shirt. There’s a magnet on the top of the tie, and you snap it right into the topknot.” And it’s all so easy to change ties as often as you like. Now men can change their look from the office to nighttime plans even more easily than women can! www.moderntie.com 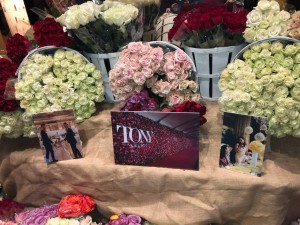 Passion Roses—Even though I’m far from a flower girl, (because I can’t bear to throw them out when they’re no longer on this level of life,) I was in love with this display, as was Noelle, who also produces musicals. As soon as she noticed a sign telling us that these Passion Roses were featured on the Tony Awards red carpet, she got really excited about this company; as she says, “I’m a Broadway Baby, after all!” At this event, these roses that are grown in Bogota, Colombia, were featured in not just traditional red, but also pale pink with cream colored edges, purple with deep red edges, and white with a hint of green. Oh no—I think I’ve just become a flower lover! www.passionroses.com 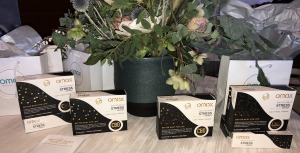 Omax Health—As too-often-stressed-out girls, who are both also always in pain, we were thrilled to discover this company’s CBD-infused wares. They were showcasing two of their products, Cryofreeze Pain Relief Roll-On and Phyto-Max Stress Remedy, both of which are for conditions Noelle states she “desperately needs help with!” She told me that she “particularly loves that the pain relief one smells of not-overwhelming menthol.” She tried some on the spot and said it really did take away some of her lower back pain, (which might have been due to carrying all those bags!) Now I need to rub some all over my perennially-aching bod! www.omaxhealth.com 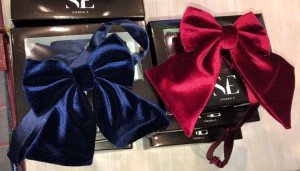 SuitKits–Since this custom suit company could not give-out suits, of course, they were gifting a “gorgeous” velvet bow tie in a choice of two “rich” colors–deep red or royal blue. Noelle noticed that they’re “pre-tied with a simple hook, which makes it a breeze to put on.” Accenting their versatility, she added, “The bow is oversized and drapes beautifully, creating an elegant look. It can also be worn with a dress or non-collared shirt.” www.suitkits.com 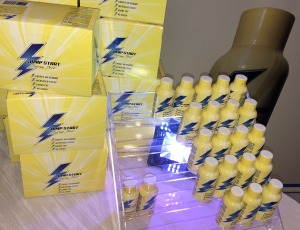 Jumpstart Energy Shot—As ladies who were exhausted at this point in our Oscars Week activities, we were happy to discover this new entry into the energy drink game! Even the bright yellow color of the bottles gave us a jolt! The lovely rep told us that the energy shots are all natural and made in the USA, both of which are bonuses. www.patbrownsystem.com

Dr. Seeta—This doctor of Ayurvedic Medicine was on-hand gifting packets of her powdered Beauty Tonic. Noelle says mixed with water, it’s said to be “a detox for healthy skin, hair growth, mental calm, and clear complexion.” And who among us does not need all that?! The VIPs also received certificates for a personalized session with her. If she can unravel all of my medical issues, she’s a genius! I’ll let you know. (The clever way she put the bow on the gift boxes may just be a good sign.) www.drseeta.com

Grindstone Universal—This urban music and fashion company gifted everyone one of their bright yellow, comfy, thick cotton promotional tees. Even though we didn’t get a choice of item, Noelle said, “I had a lot of fun speaking with their reps.”  www.grindstoneuniversal.com

Fab 5 Clothing—This new entry into the apparel company game, which had a lot of girl power on site, handed-out promotional black-and-white towels. www.fab5clothing.com

Fydelity Bags—This bag company was gifting colorful little containers that you fill with a roll of plastic bags to bring along to pick-up your dog’s mess. If that’s what it takes to make pet owners be polite, I’m all for it! www.fydelitybags.com 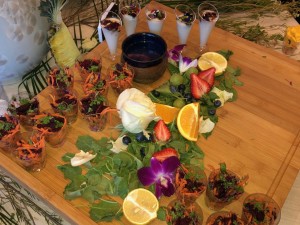 You know that I love a gifting lounge that feeds us along the way, and Rafi’s did just that. There were two tables of little vegan treats; one at each end of the room, for convenience. Chef Lauren Von Der Pool was on hand to explain the snacks to us. (But next time, they really do need to provide little forks. It was very hard to eat salad, no matter how delish, out of a shot glass, with no utensils.) Noelle said, “The presentation was bright and inviting,” which we both appreciated—I love eating pretty food! www.vonderpoolgourmet.com