With the latest Superbowl coming up this Sunday, (which means that it’s been a year since Peyton Manning’s final big win, and subsequent retirement,) I figure this is the perfect time to apprise most of you, and remind some of you, about his downright heinous actions in days gone by. I’m ashamed to say that I rooted for him last year, hoping against hope that the tiny mention I had heard about his past scandal was not true. But sadly, it is. (And trust me—I’ve done my research!) 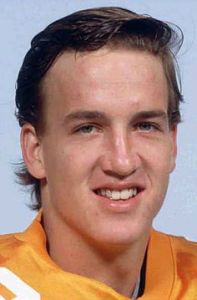 (And I’m not just publishing this now because he’s a douchebag Trump supporter, which should not surprise any of us after his horrible behavior towards one woman who would not stand for him sexually abusing her. Peyton and Trump are perfect repulsive pals for each other.)

I’m glad that the impending Superbowl makes many think of Peyton Manning this week-end. But that’s part of the point—we think of him for just these few days a year, but for the woman he did this to, I’m sure it’s a daily struggle. So, I apologize for waiting this long to bring the degrading episode to your attention, but better late than never. I know that oh so many others have swept it under the rug, but I just can’t do that.

I read a small blurb about the incident the morning after I had cheered my guts out for him just those few hours before, and my stomach churned.  It wasn’t until almost a week later that I found this in-depth report on it, which I strongly suggest you read before you go any further, if you have the stomach for it:  www.thedailybeast.com/articles/2016/02/01/peyton-s-manning-s-forgotten-sex-scandal.html. 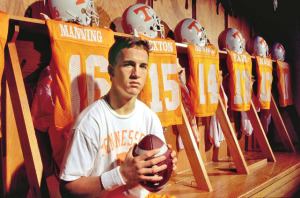 But, in case you don’t read it, this is what happened in 1996, when he was a junior on the football team at the University of Tennessee, (which should be ashamed of itself, too, by the way.): One day, in the locker room, a female trainer (whom it seems everyone respected greatly,) was being kind enough to examine Peyton’s painful foot, when he pulled his pants down and basically sat on her face!!! With his bare buttocks and testicles and all!

And then, when she reported it, he maligned her! With lies! One of his teammates, who witnessed the incident, said that it happened exactly as she said it did. Then Peyton Manning basically proceeded to destroy this girl’s life.

Even with the corroboration of the eyewitness, who said that the trainer was the one telling the truth, she got fired. What a disgrace, all the way round. (Can you see why Peyton Manning is a Trump supporter?! That “Teflon”–meaning nothing sticks to him–cheater and molester must be Peyton’s idol!!!)

The lady and Manning basically settled out of court, with a gag order, but then he and his equally disgusting father, Archie Manning, decided to malign her once again, this time in their 2002 book,‪ Manning: A Father, His Sons and a Football Legacy‬. They’ve made this girl’s life a living hell.

I can’t imagine what that poor woman has to go through every time Peyton Manning receives yet another outpouring of love from strangers who know nothing of her horror at his hands.  (Or balls and anus, to be exact.) 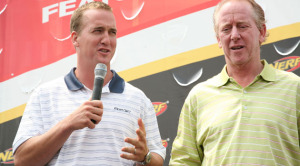 The creepy Mannings: Peyton and Archie.

Even though I’ve now researched the topic for hours, if not days, I could not write about it as well as Robert Silverman did a year ago, almost to the day, in the Daily Beast column that I linked above, so I’m really hoping that you all take the time to read it. Peyton Manning’s conduct, that day, and since, was vile, but even worse is that, even now as grown-up, he doesn’t take responsibility for his nefarious actions. He should be owning up to it, on a daily basis, and doing everything he can to help that trainer, who has now lost everything, all because of his repulsive antics. (I had a much lesser, non-sexual, but similar experience, when I was a dance club promoter many years back, and I have still not gotten over it. It didn’t mess-up my life and livelihood, as this one did hers, but it’s hard to not still have a few nightmares over. So her daily horrors must be multiplied a trillion-fold!!!)

So, now, you have all of the facts, and if you still root for him in life, that’s on you. Personally, I’d take back all his wins, if I could. This is just how much I revile Peyton Manning now—I’d even root for Tom Brady against him!!! How’s that for complete hatred from me?!

I also hate his father, Archie Manning, too. How could people be this evil? (I think that Eli had nothing to do with this whole situation, though, which I’m glad about, because he seems like a good kid. Although, I guess this incident proved, you never know.) And, for Peyton and Archie to hide behind a facade of religion makes the whole debacle even sicker.

I only wish that Peyton Manning was still playing ball, so I can root against him this time. I only hope that he spends every waking second of his life from here on out worrying that some jackass might abuse his daughter the way that he abused the daughter of another man. But I think he’s too uncaring for even that concern.

And by the way, on Sunday, go Falcons!!!