Trending
You are at:Home»EVENTS»EVENTS: QUICK REVIEWS OF HOLIDAY EVENTS
By Karen Salkin on December 17, 2013 · EVENTS

In-between all my movie screenings for SAG, and my many doctor and therapy visits because of my hands, I’ve managed to squeeze in some holiday fun. I was at one such event the other night with Mr. X, (I know—it was a shock to me, too, that he accompanied me to something, but I’m pretty sure it was only because he had the coolest Ugly Xmas Sweater,) and we had such a good time that he kept asking if I was going to be reviewing it. When I told him it wasn’t my kind of thing to review, he kept badgering me, so I decided I should do a few quick reviews of some of the fun holiday I’ve had in LA this year. So, here goes!

I couldn’t help myself from taking a quick snap of the joyous finale! Photo by Karen Salkin.

This was by far the best thing I’ve seen in a long time! It was the happiest, tightest, and most entertaining event of the whole season. Between the dancers, singers, and musicians, I think there were about a hundred people on stage performing in the Grandeza Mexicana Folk Ballet Company’s holiday show! And every single person was talented. And the costumes and hairdos and backdrops were all perfect, as well.

Since we know the arts are always under-funded, my friend and I were trying to figure out how a dance company in 2013 can pay so many performers. So I did some research and was shocked when I found out the answer—it’s all volunteers!!! I don’t understand how they could get a show of this high caliber together with just a couple of rehearsals per week, with all the members spread-out in Southern California, and most of them holding regular jobs. It’s mind-boggling.

I plan to keep an eye on this talented group, and I’ll let you know whenever they are performing again, which I hope is soon. This is a must see for anyone who cares about dance. And I was thrilled to be a part of the most enthusiastic audience ever. 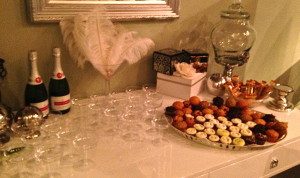 Part of the Winx spread. Photo by Karen Salkin.

To my mind, nothing enhances female facial beauty more than great eyelashes, and unfortunately, most of us don’t have them naturally. So, I was very happy to have some applied to my own flutterers at the launch party for Winx, the new eyelash boutique off West Hollywood’s Third Street.

My friend and I had other places to go that night, so because we paid an early visit to the Winx shindig, I was able to get my lashes done, by owner Sabrina Sassoon no less, while my friend got a make-up lesson from one of the other girls.

And in-between, we snacked on pizza, champagne, and cupcakes. What a fun use of my holiday time!

More importantly, there was a humanitarian component to the evening; they provided the eyelash extensions for the North Hollywood Jr. Chamber of Commerce’s Operation Santa project, which did
makeovers on five single and deserving moms, thus proving there’s always a way to give back!

Even though it seems that I attend mainly invite-only events, I do really like some of the open-to-the-public ones, especially at holiday time. I hesitate to recommend the ones I go to here in Los Angeles because most of them are already crowded enough, and I’m scared of crowds, especially with so many rude-sters in attendance. They walk around holding their cigarettes at a level where they could burn anybody walking past, (when everyone should know enough not to smoke cigarettes nowadays anyhow,) they’re often squiring rude children, and no one looks where they’re going anymore, which means my broken back and messed-up hands get bumped into a lot.

But this season, I did make it to three excellent neighborhood events, (I do feel bad I missed Manhattan Beach and Toluca Lake, though,) so here’s the quick rundown on them:

The Holiday Open House on Montana Avenue in Santa Monica is always the classiest one. It takes place on just one easy up-and-down the street, and the majority of the stores participate. They serve all kinds of snacks, some give away little trinkets and such, and they all have sales, which come in handy at this time of year.

This is the first year I heard about the Winter Wonderland Holiday Party on Third Street in West Hollywood, and that’s only because I went to that Winx Beautique opening that I mentioned above. So when we were done with their event, we had some time left over to explore the stores in that area. It was interesting enough, though a bit different than the usual ones, perhaps because the street itself is bigger and the stores aren’t necessarily side by side. And the restaurants there are basically “bah humbugs.” The best part of it was that hip paint store Portola had us all paint an ornament to take home. 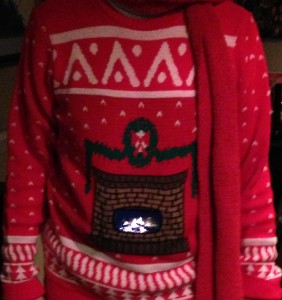 Mr. X’s Ugly Xmas Sweater–you have to see the fireplace be actually working to fully appreciate it! Photo by Karen Salkin.

But none that I had ever been to before compared to Beverly Glen’s Taste of the Glen, in that center at the top of the hill, near Mulholland. (This is the one Mr. X came to, and can’t stop exclaiming about! And he usually hates free stuff!) I was wondering how they would do it because it’s mainly restaurants up there, but that’s what made it so special. Every restaurant, (except for the Grinch-like ungenerous Charlie’s Pantry,) served something delicious in front of their establishment. I’ve actually eaten at every one of them, (except a pretty new Italian place,) but I was glad to taste dishes that I had never had before. The chili and arancini from Vibrato were out of this world! And all of the stores, that most people usually think of as kind-of snobby, had personnel who could not have been kinder. I’m up there a lot, and even I was surprised by the amount of holiday cheer exhibited by everyone. And a bonus is that I spied a really good old school celebrity, which I’ll tell you about in the next Celeb Sightings column, so keep an eye out for it.

On that high note, I’m going to go get ready for the round of private parties that I have coming up, so I’m as glad as you are that this column was a brief one!