Trending
You are at:Home»EVENTS»EVENT/MOVIE REVIEW: COCO AT THE EL CAPITAN
By Karen Salkin on October 1, 2018 · EVENTS, MOVIE REVIEWS

COCO AT THE EL CAPITAN

The second I saw the trailer for Coco last year, I knew it would win the Oscar for Best Animated Feature. But, sadly, I never had time to see it back then. And then it was gone from big screens, (which is the only way I would see it for the first time!) 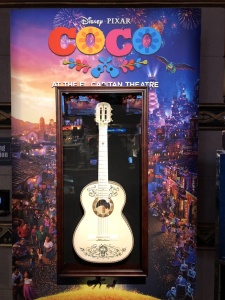 One of the beautiful lobby displays at the El Capitan. Photo by Karen Salkin.

But luckily for me, and all of us, actually, it’s back! Yes, Hollywood’s El Capitan theatre is giving us that second chance to see this instant classic!

And I was more than happy to grab that opportunity on Opening Night last week.

What a perfect way to kick-off Halloween month! The animated movie takes place on Día de los Muertos, which, in English, is Day of the Dead, a Mexican holiday that falls on October 31-November 2. (I know “dia” means “day,” which is singular, but all my research says that it’s really celebrated over those three days, which was news to me. Go figure.) 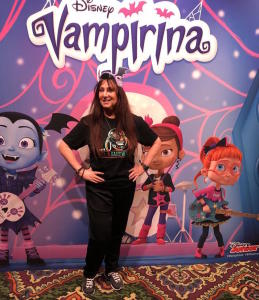 Part of the fun at the El Capitan is seeing the guests come appropriately dressed for each occasion. I thought that I was clever by wearing a tee shirt with a classic Día de los Muertos face on it, but so many of the little girls went even further and dressed-up like Frida Kahlo! And one man was even rocking an entire mariachi uniform! I love that bit of festiveness!

As for the movie itself, the computer-generated animation in Coco is absolutely gorgeous!  My mouth was hanging open half the time, (when I wasn’t laughing or crying, that is.) Mr. X said, “The extraordinary evolution of Pixar’s animation reached new heights with the mesmerizing rendering of Coco herself.” (For those of you who haven’t seen the film, Coco is the great-grandmother, not the little boy.)

And, I’m shocked over this myself, but the story actually surprised me! I did not see some of the plot twists coming, which is pretty unusual for me.

Ballet Folklórico de Los Angeles with the Mariachi Divas. Photo by Karen Salkin, as is the big one at the top of this page.

And, as always with Disney films, the only place to see it in Los Angeles is the El Capitan in Hollywood. Even the event-eschewing Mr. X comes to this theatre with me with no argument. (And those who know us know how special that means this place is!)

Speaking of special, the El Capitan always has creative perks for their audiences, none moreso than the entertainment before the curtain rises on the movie showings. It’s different for every movie, so it’s always a surprise to me. (And it even changes a bit within the entire run of each movie.)

The professional performers dancing with children from the audience. Photo by Karen Salkin.

For opening night of Coco, we got treated to the Mariachi Divas, who, as the name hints, is a rare all-female mariachi band. They’re wonderful; I can see why they’ve won a couple of Grammys! And, even more fun for dance lovers, like me, two couples from the Ballet Folklórico de Los Ángeles performed alongside the Divas. It was adorable when they brought children up from the audience to dance with them. (That whole group is there for select performances only, so, if that’s the entertainment you’re interested in—and it should be!–check their website below to ascertain the dates.) 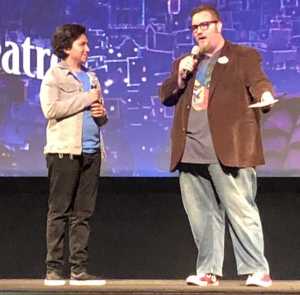 Anthony Gonzalez, on the left, being interviewed. Photo by Karen Salkin.

But every screening of Coco will begin with music videos featuring the Disney cartoon groups, Vampirina and The Ghoul Girls. Every child was quiet for those, let me tell you! (Except maybe to sing along. And I use the term “sing” very loosely.)

I always joke that there are only two kinds of people I’m prejudiced against—Hare Krishna and…child actors! So I was thrilled to see how lovely and down to earth the star voice of this film is. Young Anthony Gonzalez, who voices the main character, Miguel, did a Q-and-A right after the musical entertainment, and Mr. X and I were both very impressed with him. What a sweet, unaffected kid he is! Knowing that made the film so much better for us. And his voice was perfect for the role! He sang a few songs, too, and his dulcet tones are beautiful. He actually has the exact perfect mariachi singing voice. 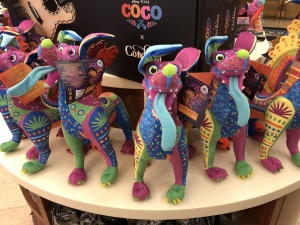 Pair all of that fun with the theatre’s iconic colorful tub of the best movie popcorn in town, and you have a totally winning day or evening at the movies.

And that’s just the beginning of the holiday treats at El Capitan! They’ll be bringing lots of seasonal offerings our way for the rest of the year. And I’ll be the first one in line to let you know about all of them!

Coco at the El Capitan running through October 7, 2018 www.elcapitantickets.com