When I was recently in New York, I took a friend from a rural town in Ohio to a Screen Actors Guild screening. As she perused the crowd, she remarked that the group of people in attendance, (actors and their guests,) were from a demographic she usually doesn’t see. 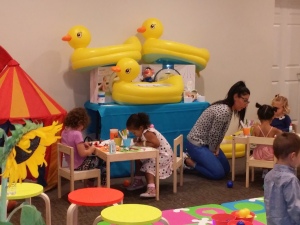 I never would have thought of a concept like that until I had a similar experience last week-end at the LA Baby Show at Magic Box at The Reef downtown. I think that my cohort, Alice, and I were the only two guests there who were not moms, nor pregnant!!! It was sort-of surreal. As a total nocturnal party chick, I rarely even see a child, let alone an infant! So, this show really opened my eyes to an entirely new world of practical life needs.

And I loved it! There was so much to learn! I bet all those young parents got a lot out of it.  Who knew there were so many aspects to baby-raising?! 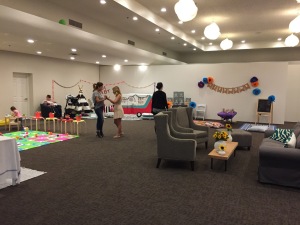 Alice and I spent the first part of the day in the absolutely wonderful VIP Lounge, which was brought to us by MomAngeles. I knew it would be there, of course, but I didn’t expect it to be quite as fabulous as it was. First of all, it was in a giant room, so mothers could enjoy the beauty services while their babies played, without being on top of each other. There was a big entrance area, with tables for the delicious boxed lunches they served, and then, a bit further inside, an even bigger space with a play area on one side, and all the pampering on the other. 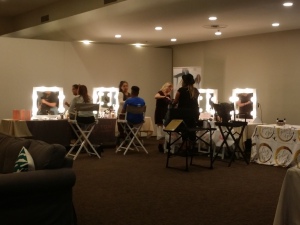 I had a funny, wonderful experience as soon as we entered.  I was crushed when I saw an entire mini hair salon set-up, courtesy of SalonMom, (who makes house calls!,) because I would have loved to have my tresses flat-ironed, but I had shown up with not the freshest hair, so what would have been the point? Mine was already straight, and I was planning on washing it when I got home, and then having to take the time to work on it myself. (I always have super-clean hair in public, but I knew that, with so many little ones there, no one would be looking at me.) So, had I left the house that morning with my clean, naturally wavy hair, SalonMom could have done the honors, and saved me all that time and trouble. 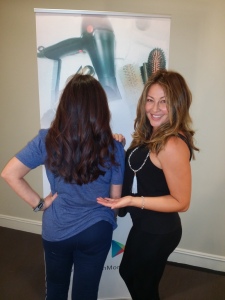 Michelle Cochran from SalonMom (on the right) showing us Karen Salkin’s newly-styled tresses (on the left.) Photo by Alice Farinas.

Just when I began to feel bad about the situation, I spied blow-dryers on their table, so I impetuously asked, “If I wet my hair, will you guys blow it for me? If so, I’ll just throw my head in the bathroom sink, and wash it with soap!” Michelle Cochran, the one in charge, not only got right on board, but she tracked down baby shampoo (which was not hard to do at a baby show—duh!,) and washed my hair in the sink herself!!! We were laughing the whole time, (even though the drain in the tiny sink almost “Isadora-ed”* me by pulling my tons of locks down it…while it was still on my head!) Alice was in there with us, and said that we got quite the number of weird stares. I don’t doubt it. [*Look-up how Isadora Duncan died, if you don’t already know what I mean.]

Then Michelle blow-dried, and even curled, my newly-clean mane. What a treat! Her entire staff was so good and kind and pleasant to everybody, which, trust me, is far from the norm at events such as this. The stylists usually can’t rid of you fast enough. 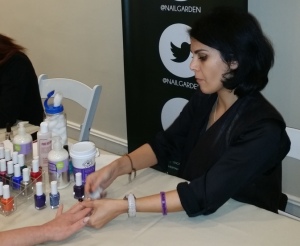 Alice and I enjoyed all the services in the VIP lounge, but SalonMom was the star for us. We also got polish changes from LaLa of Nail Garden, chair massages by the Soothe staff, (Wanda West worked on my knots, with Nuna Rawlins on Alice’s,) and a unique one—a mini-tan from Golden Glo Tans in Beverly Hills. Since they knew this was not the crowd who would have the time or inclination to strip and get tanned from the usual air-brushes, they did something that I’ve never experienced before—they applied the tanner with a make-up brush! You could have them do it to your face only, or also your arms, chest, and whatever body parts you wanted to expose that day. I was so upset that I was wearing pants. If I had worn a skirt, you know that I would have thrown my legs in the sink, too, and shaved them. (But would a Baby Show have razors around, like they did with shampoo?  That one, I doubt.) So, Megyn did my face, neck, chest, and arms and hands, and let me tell you—I loved, loved, this color! I had forgotten all about it, so when I looked in the mirror the next morning, I wondered why I looked so good! For reals. 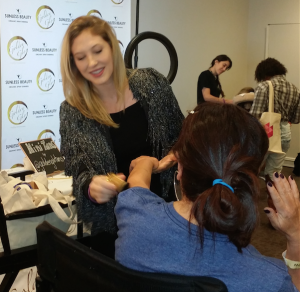 So, now looking good, feeling good, and fully sated from the healthful lunch, we went out onto the show floor to enter the world of baby goods. There was so much going on there! Tot Squad was even vacuuming-out the patrons’ baby strollers! There was also a moving company there, Flatrate Moving, which was great for non-parent moi!  I had left some stuff at a pal’s house in Brooklyn, and the company I used last time was being—how shall I say—less than cooperative, so I was happy to talk to these new peeps. 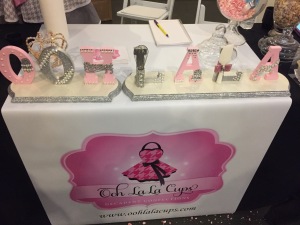 We tried a lot of baby food samples, which were actually quite good. But, by far, the best taste treat that day was from Ooh LaLa Cups. They had all kinds of creative popcorns, which were also beautiful. Their whole display, down to the uniforms, and even one girl’s pink watch(!,) was as mouth-watering as their treats.

Here’s a secret about me—for many years, I’ve used a quilted diaper bag as my purse!!! Even funnier than that usage is the number of compliments I’ve gotten on it! I’ve received more on that bag than on the rest of my (classier) purses combined! But, it just might be on its last legs, so, when Alice pointed-out Happ Brand, a local company with designer diaper bags, I could not wait to explore their wares. 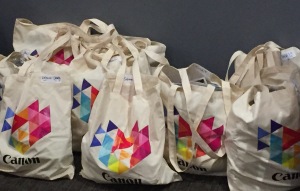 We received many samples from the zillion companies who were participating, and on top of all that, I received an “influencer” goodie bag on the way out of the VIP Lounge. Along with all the baby gifts in it, there were also some for the moms, which even we single gals can use. I heard that some of them, (but, sadly not mine,) even contained peanut butter, which is the one thing I would have loved. But even missing that, I so appreciated all the products in there. And so will the new mom pals I give the contents to!

The show was so big that, hard as we tried to cover everyone, I have a feeling that we did not get to visit every sponsor. (No wonder the show goes on for two full days!) But no worries for me—there’s always next year. Maybe I’ll even take a friend’s baby along as a beard. But no matter what I do then, you know that I’ll show-up with clean hair!