This was my sophomore year attending this past week’s wonderful Macy’s Passport Fashion Show, which I’m just thrilled that I discovered last year. I’m grateful that I got in with the in-crowd in time to see how it was presented for all the years before, (which is how it was done last year,) and how they changed it up for this season. They say variety is the spice of life, and to that end, this year’s show, entitled Glamorama, was totally different from 2009’s version. Both were great in their own ways. 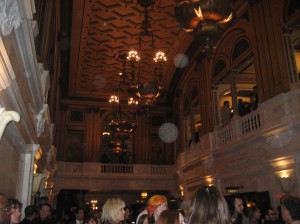 2010 brought a new venue which seemed to dictate that the format of the show be altered somewhat. First of all, it took place in a theater, as opposed to a big old warehouse-type of space where they had room for a very long runway. Therefore, it had to have more elements of a stage show than a runway one. The set designers created a clever three-armed mini-runway so there could still be several models cat-walking at one time. And they had stairways and other levels on-stage, with lots of video presentations. More on the show itself in a sec, but background first, of course.

I think this was my first time at Los Angeles’ venerable Orpheum Theatre downtown, the center of the fashion business in this city, and I loved it. It had such an old-Hollywood atmosphere, which is very “in” right now. Retro is where it’s at. I almost expected to see Marilyn Monroe any second.

The same, and most important part, is that Macy’s Passport still benefits two very deserving charities, AIDS Project Los Angeles and Project Angel Food, so the audience is doing good while enjoying themselves at the hippest fashion event of the season.

Though not as star-studded as last year’s gala, which featured Sharon Stone and Elizabeth Taylor, they weren’t really missed. Sharon’s function was to do the very time-consuming auction and LaLiz simply gave her plea for more funds. Most of the attendees/their corporations, had already donated, so it was kind-of nice to just enjoy the show this year, without reminders of the sad reason we were really there to begin with. It was kind-of like trading star power for more time to enjoy, which I think this audience appreciated.

The creators of the fashion show definitely did as much as they could in working with a traditional stage. There were still beautiful creative visuals, in addition to the fashions, which were, as always, the stars of the show. And there was much more dancing, which I really excited to see. Capitalizing on the recent dance craze, which is fueled by all those reality shows in that genre, they had several So You Think You Dance alumni, including Mark Kanemura, who I consider it a privilege to have seen in person. He’s just spectacular! 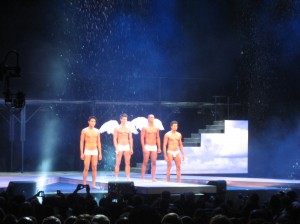 No caption necessary. Who's looking UNDER this photo, anyway?!

The fashions themselves were interesting, as usual. My favorite was guys in hip versions of tighty whities. (Did u think it would be anything else???) Some of these guys were so chiseled that it looked like their abs were painted on!!! (Wait a second–maybe they were! I should have inspected a little closer.) [Note: No one can agree on if the expression is “tidy” or “tighty,” and a case may be made for either.]

The Material Girl section, Madonna’s line of her 80s-style duds with help from her teen-age daughter, was probably the most fun one, and featured lots of younger dancers. Between the theatre itself and this very-retro new fashion line, I didn’t know which decade, or century!, I was in! I love a multiple-time-warp evening! 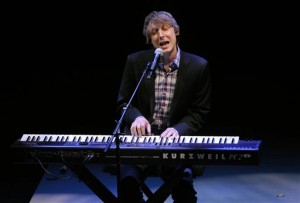 And what’s a fashion show without music? In the middle of the show, Eric Hutchinson performed his hit song, OK, It’s Alright With Me. I hadn’t recognized his name or face in the program, but as soon as he played the first note on his keyboard, I knew the music immediately. I love that song! And he was delightful and charming as he shared his next composition with us, accompanying himself on guitar this time. He has a really clear, good, you-want-to-listen-to-it voice, and was a very excellent surprise. 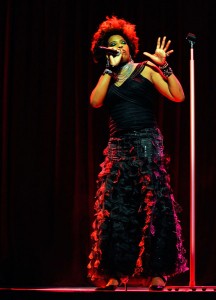 Macy Gray closed the show with her usual quirky-good performance. And she was wearing the best dress I’ve ever seen her in! That was good since it was a fashion show. She provided the right touch to end the presentation with.

But that was far from the end of the Glamorama festivities! Many of us moved over to the California Market Center for a spectacular after-party, which we were ushered into by some pretty interesting circus-type performers, just to add a little more magic to the already special night. There was so much happening at the shindig that Lucia and I spent most of the evening in one giant area, not realizing that there were others with even more food and activities!

The reception was so huge, in fact, that it reminded me of the story about blind men describing an elephant; each one had a different impression of what the whole looked like by which part they were touching. Each guest here would probably describe the soiree differently depending on which section they headquartered at. Towards the end, Lucia and I finally found the happening patio, which she summed-up as the “model and dancer area.” I’m sure it was just a coincidence, but there did seem to be an abundance of the best-looking people out there. Maybe it’s because that’s where the picture booth was, and they were the people who were happiest to have their pictures taken. (So, I guess that’s where we should have been to begin with!) 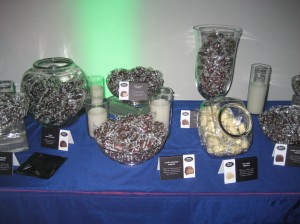 The whole affair could not have been more generous! There were all kinds of comestibles, from mini bacon-avocado sandwiches to grilled ahi tuna sandwiches to garlic shrimp to beef tacos to red velvet cupcakes, and much, much more. And between the many stations and lovely servers, especially our new best friend Brandy, passing trays the whole time, there were never those awful log-jams that are prevalent at just about every buffet function I attend.

And all the while we could pick-out black-and-white flip-flops provided by Office Max, and whatever sweets our hearts desired from the See’s candy bar. There were all kinds of libations and non-alcoholic drinks, as well.

As is Macy’s classy style, we ended the evening with goodie bags chock-full of useful items, including Mac make-up, which I always jump out of my skin to find there. Great gifts, excellent edibles, gorgeous fashions, fun music, and handsome guys in underwear–sounds like the perfect event to me! I can’t wait to see what they’ll come up with next September.