At this point in what others have dubbed my “glamorous life,” I can usually figure out what an event will be like from reading the invitation. Sometimes I’m surprised, but I’m usually spot-on. 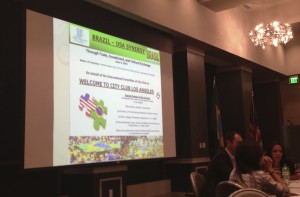 The presentation. Photo by Karen Salkin.

But boy, was I wrong about what this fabulous Brazil-USA Synergy fete was! The invite said “cocktail reception,” so I expected the usual cast of characters who are invited to these things, and a few passed hors d’oeuvres. The invitation came from the Consul General of Brazil, so I really should have expected more, which is exactly what we got.

There were no freeloaders at this one; only real, classy, invited guests! What a pleasure. It was held at the beautiful, upscale, private City Club Los Angeles downtown, and I was happy to see that just about every attendee was dressed appropriately for what the invitation said was a “cocktail reception.” 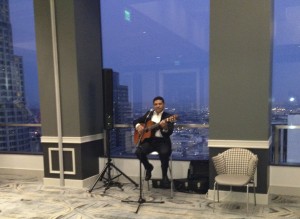 The guitarist, against the backdrop of the downtown skyscape. Photo by Karen Salkin.

Upon entering, we mingled and perused a photography exhibit entitled Well Souled Brazil by Mark Leibowitz. And throughout the evening, we were treated to lovely guitar stylings and serenading by a man whose name I should have gotten, but at the time, I was too lulled into relaxation by his work to think of asking. So, shame on me.

But the food was the absolute surprise of the evening. It was a gorgeous churrascaria-style Brazilian buffet, and I seriously can’t remember having a better meal in a very long time. It was first class.

In case you’re not familiar with churrascarias, they’re eateries where servers come around with meats on giant skewers, and they cut exactly what you want onto your plates. Since this was a buffet, we went up to their carving station for it, but the rest was the same. 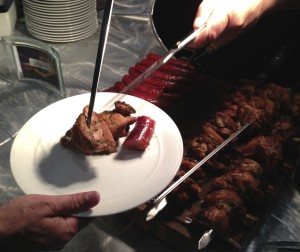 A guest receiving the chicken and sausage. Photo by Karen Salkin.

There was delicious chicken and sausage, but the picanha (top sirloin) was out of this world. There were also several salads, including two kinds of fruit platters that are always welcome, beans, rice, collard greens, and shrimp in a wonderful sauce that, when served over the rice (as I did,) was my favorite dish of the evening. On an entirely separate table were the incredible cheese biscuits; the organizers knew what they were doing to separate these heavenly pillows because they are so addicting that we all would have filled-up on them otherwise, and missed the rest of the first-rate fare.

The desserts, including little chocolate mousse cakes, just added to my delight. (And to that of my guest, who’s a big, muscular guy whom I’ve never seen eat sweets! It was his birthday, which is perhaps the reason he allowed himself some cake, so I was extra-happy to see him indulge so joyfully!)

I swear, I was aware of the program that was going on, including greeting remarks and a live auction of L.A. Galaxy tickets, but I was in such a food reverie that I couldn’t pay as much attention to the proceedings as I usually do, so I’m sorry to not be able to tell you more in that category. 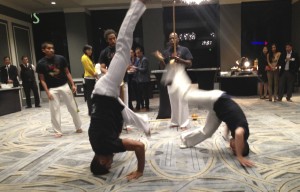 The capoeira troupe, in motion, right in front of my face! Photo by Karen Salkin.

But I did take a break from my face-stuffing long enough to watch the evening’s entertainment—a capoeira troupe, who performed right in front of my seat. It was great to see it so up-close and personal, and the danger of getting my teeth kicked-in just added to the excitement. I mean it; I was leaning so far back (to protect my face from their fabulous kicks) that I was actually practically lying in the lap of the man in the seat next to me! The whole thing was quite the experience. (The funny thing is that one of the dancers, a tall virile guy, entered and exited the room pushing his baby in a carriage! The dichotomy made me laugh.)

Suffice it to say that this event convinced me that, with Brazil hosting the 2014 FIFA World Cup that began last week, it should be an even more exciting event that usual. And all in attendance at the games will eat like kings. Or at least like Pele and Ronaldo!