BEYOND KING TUT: THE IMMERSIVE EXPERIENCE

Having missed last year’s Immersive Van Gogh Exhibit, (because I’m naively of the mind that everything lasts forever, which means that I didn’t realize it was just in Los Angeles temporarily,)* and feeling awful about it ever since, I was thrilled to see the King Tut Immersive Exhibit last week. I wasn’t going to let this one pass me by! *[Note: I just heard that Van Gogh is perhaps back in town for a limited time, so if that’s correct, I’ll let you know about it soon.] 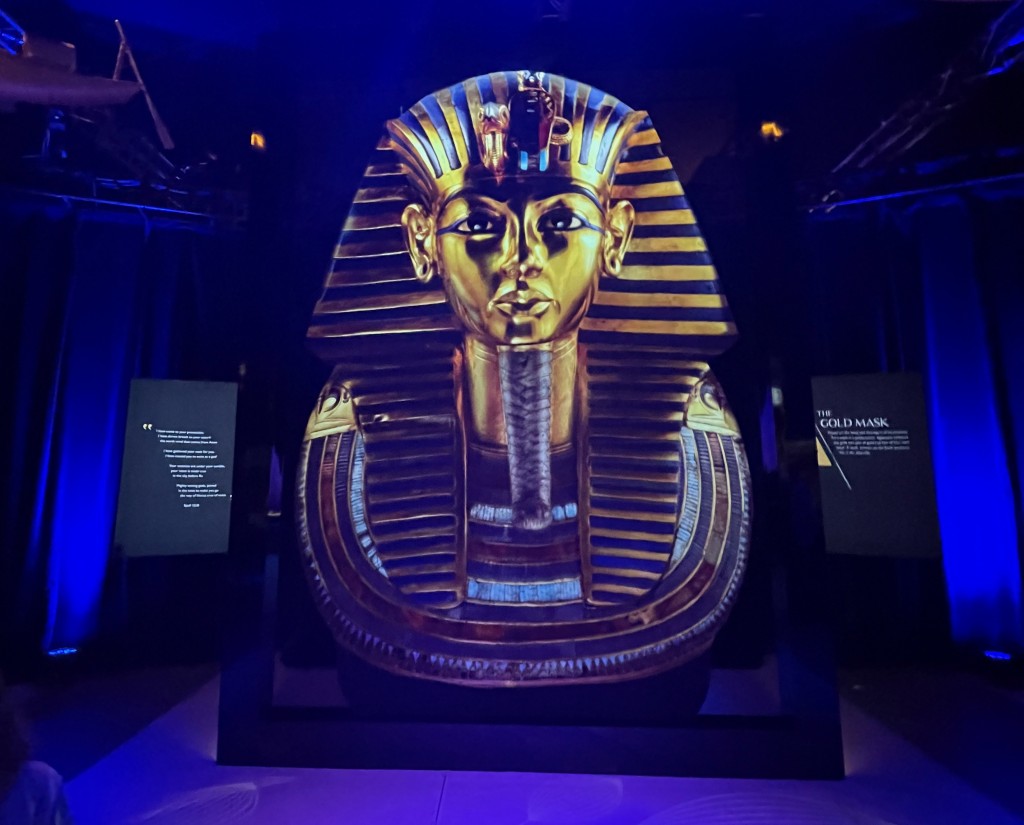 Beyond King Tut: The Immersive Experience is such a beautifully varied exhibit. Each room is different from the one before, and they’re all interesting. And educational, as well, for everyone. I brought two kid pals with me–twelve-year-old Leon, who told me the whole thing was “fun and interesting,” and nine-year-old Lula—along with their mother, Laura. And all of us of different ages learned something. If “King Tut lived to this age” was a question on Jeopardy, I would have erroneously guessed “ten” before, (because he’s always been referred to as “The Boy King,”) but now I know it’s really “nineteen.” (So, actually, more of a man than a boy, especially for those times.)

But I’m getting ahead of myself. Let’s start at the beginning. The Immersive King Tut experience is located in downtown LA, in The Magic Box which, in turn, is in The Reef. That all sounds complicated, but it’s actually far from it. And it’s in a very easy part of downtown LA. There’s usually even street parking in that area! (But no worries for those of you who, like Mr. X, prefer to park off the street—there’s also an adjacent affordable lot.)

And let me tell you—every single staff member we encountered that day was wonderful: the people who checked us in, the guy who helped us enter, the guides inside, the young gift shop saleslady, the girls who ran the Virtual Reality area, and even the young woman at the snack stand! They really made the whole experience an absolute pleasure. 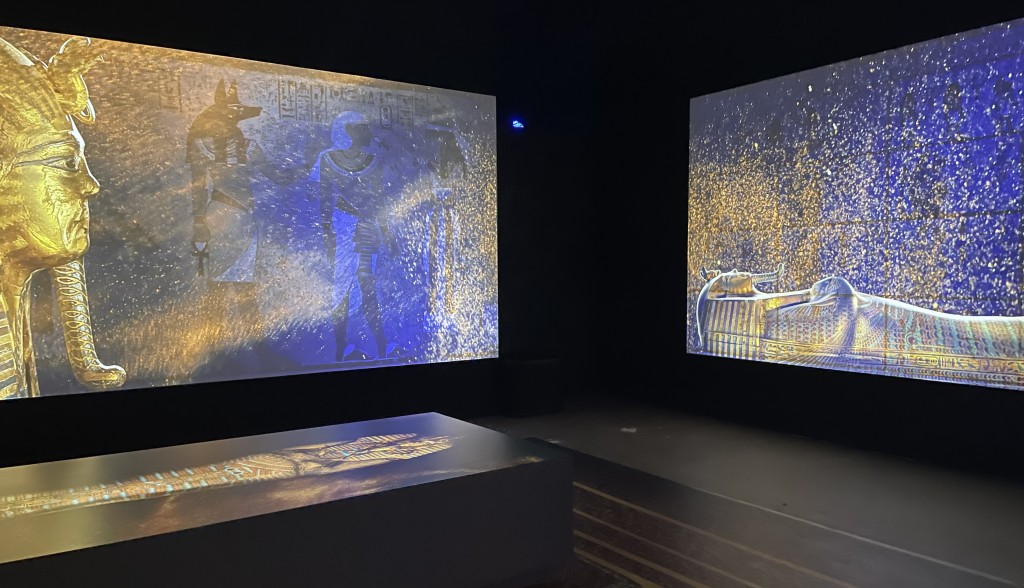 In case you didn’t know, November 4, 2022, (the day this exhibit opened, actually,) marked one hundred years since King Tut’s tomb was discovered. (And no—it was definitely not Geraldo Rivera who did it!) I understand that it’s the only intact ancient Egyptian royal tomb ever found, which makes learning about it that much more special.

The Immersive Experience takes place over several continuous areas, with images, all-enveloping animation, booming narrations, (ala Disneyland and World’s Fair attractions, in the best way,) and posted stories from the archives of National Geographic. I have to admit that I never appreciated that magazine when I was younger, even though my parents had hundreds of them in my library-esque basement. But now that I’ve seen this show, I’m a fan, (which I wish I had realized before I let all of those historic mags go when I cleaned-out my childhood home just a few years ago!)

My group even got to play an ancient board game in one of the rooms, which, of course, was my co-favorite part; it was a tie with the colorful final portion of the exhibit. [Note: By the way—it’s immersive, not interactive, so I believe that fun game is the only thing that can be touched in there. Ask the guides when you go, to be sure.] 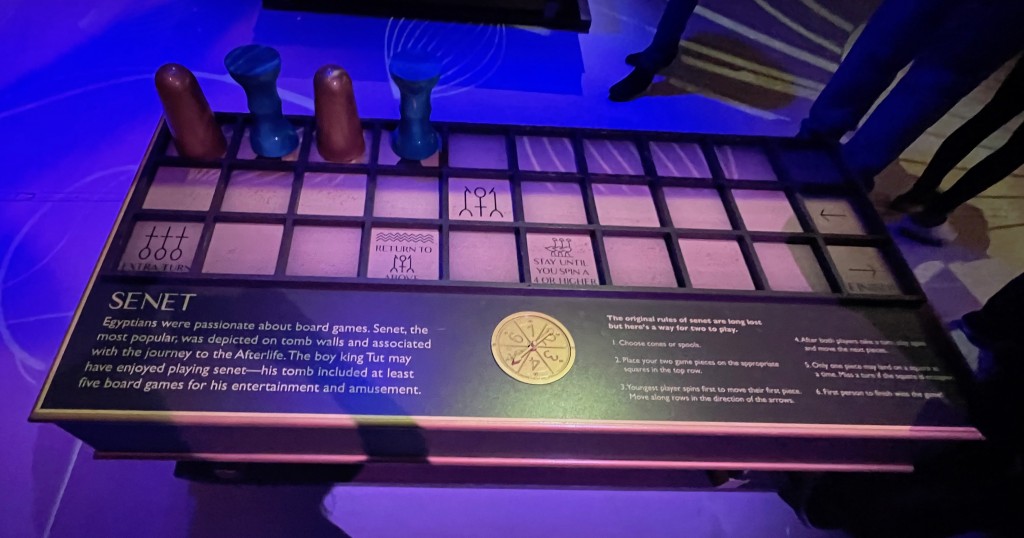 The game we played. I’m not saying which team came out the victors, but slow and steady definitely won the race! Photo by Karen Salkin.

All of that is definitely enough for a great time, but you can add a VIP Experience to your admission, which we all feel is worth it. It provides two fabulous perks, one at the end and one that you can choose to do on either end of the exhibit. (We chose to save that one for last.)

First up for us was this one: As with so many artistic experiences, the exit is through the Gift Shop. (So put blinders on your kids if you’ve already bought all their holiday gifts this year.) When we got to the end of it, we found-out that, because we were VIPs, we each received a cloth tote bag, and got to choose between a handsome commemorative King Tut poster and a lovely blue stone bracelet with a little silver ankh, which, of course, the three of us gals chose in a nano-second. That just put extra smiles on all of our faces. 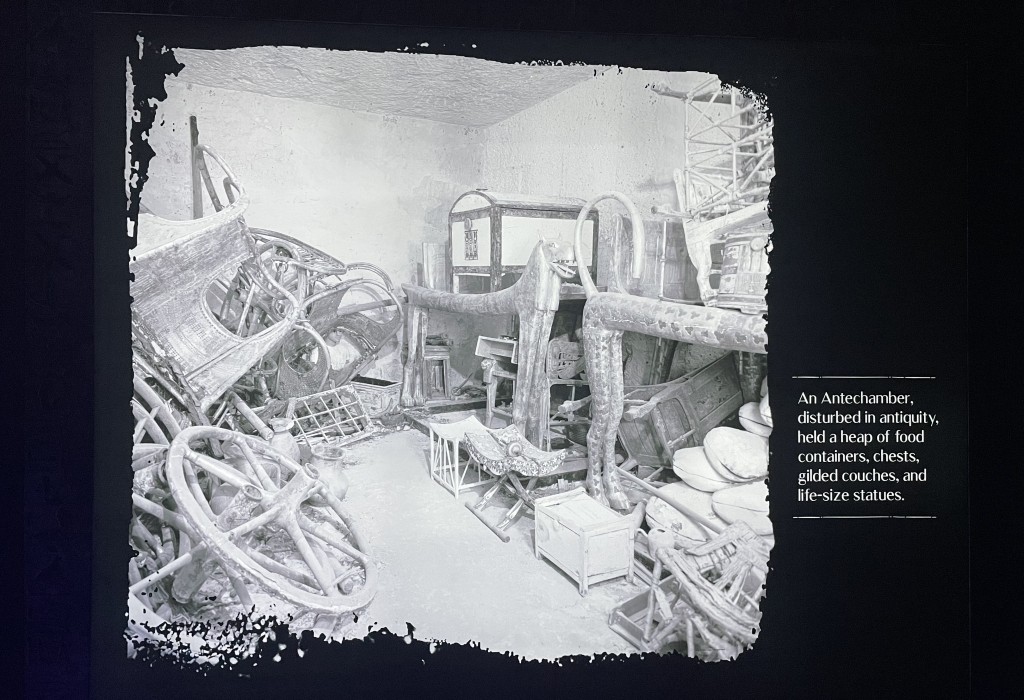 This is one of the photos in the exhibit, but you get to explore the whole room in the VR add-on. Photo by Karen Salkin.

The other VIP situation is…a Virtual Reality session! It’s entitled Enter the Tomb, and that’s exactly what we felt like we had done. Leon gushed, “That was really cool,” and advises my readers, “You should do it!” [Note: It is not recommended for children under twelve, so keep that in mind. But Laura chose to allow her precocious nine-year-old daughter to do it, and she loved it!]

Speaking of Laura, (my grown-up associate,) she deemed the whole thing “amazing,” and told me, “I really enjoyed the history lesson.” Comparing it to the Van Gogh exhibit, she added, “I liked that this one takes place in several spaces, and has a narrative along the way.”

I concur with everything those guys said, and especially found it to be a really fun experience to share with your family and friends. So to that end, I share this with you: I often look for something special to do on the day or afternoon of New Year’s Eve, to avoid being out at night with all the crazies. So seeing this different kind of entertainment, followed by an early dinner at an out-of-the-way cafe in that area of town, and then getting to stay in that night and watch all the NYE shows on TV, is the perfect way to end this stressful year. 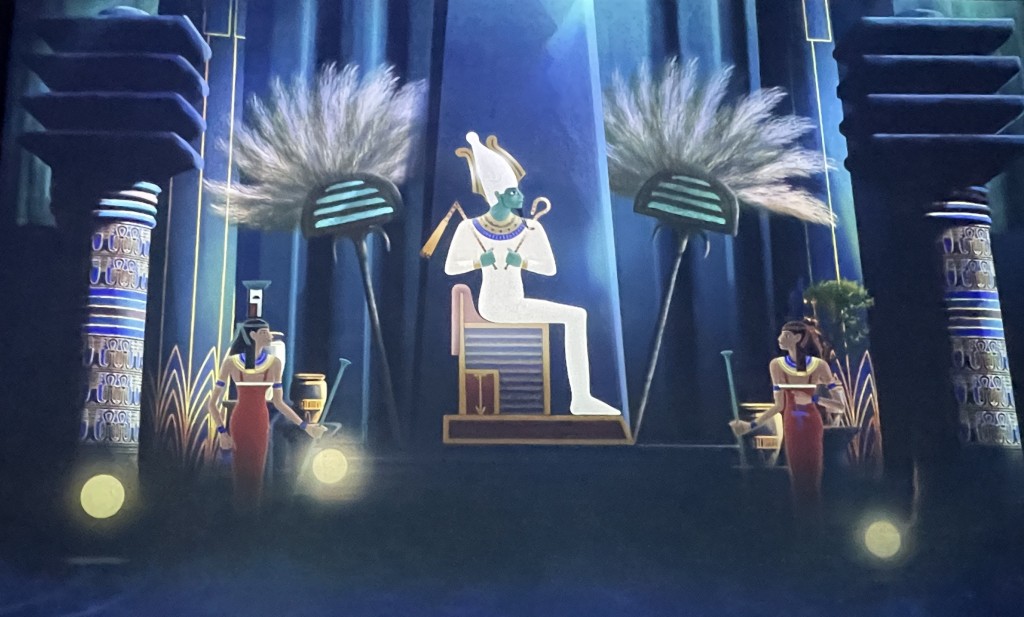 Part of the animation portion of the exhibit. Photo by Karen Salkin.

So that’s what I recommend. [Note: I just convinced myself to do just that with Mr. X! I’ve been feeling terrible that he missed this King Tut exhibit, so that would be the perfect way to end the year! And my regret.]

But just try getting Steve Martin’s King Tut song out of your head for the next week. Even though it’s, of course, not playing in the exhibit, I keep hearing it ever since.

Beyond King Tut: The Immersive Experience running in LA through December 31, 2022
The Magic Box
1933 S. Broadway, LA
(Followed by stints in many other cities in the US and Canada.)

For more info and tickets, please go to: www.beyondkingtut.com.