Lucia and I ventured into the interesting area near Little Tokyo last week for the opening of the bar One-Eyed Gypsy. (Luckily, there were none of those there.) This is Dana Hollister’s most eccentric place yet! The proprietor of Villains Tavern, which is in a different part of downtown than most of us are used to, and the beautiful Silver Lake eatery Cliff’s Edge, has opened a bar that the performers of Cirque Berserk would love! 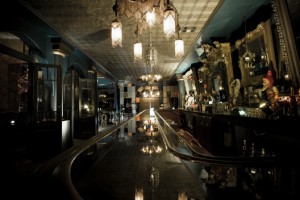 The invitation promised “Cocktails, Carnival Fare, and an array of live entertainment,” and they delivered on all three. There was also good enough parking, both in a small adjacent lot and on the deserted streets in the area.

First of all, the place was so dark that Mr. X would have loved it. I’m so glad that I hadn’t bothered working on my hair that night! I could have even shown-up naked and nobody could have made-out any body flaws. (Not that there are any.) 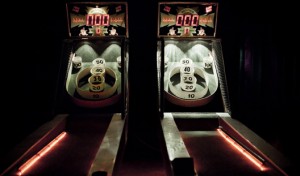 And there were all kinds of fun areas, including two skee ball machines, that we made use of, (as competitive as I am, I’m big enough to admit that Lucia beat me by twenty points,) an old-fashioned fortune-telling machine, and a photo booth that will hopefully be up and running in the future. (So we can all see what we looked liked there, since it’s too dark to know on the spot.) 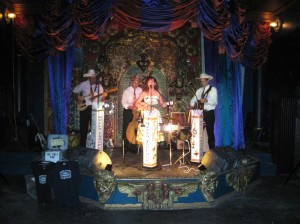 The bar and two table-seating areas are appropriately appointed. And the stage cracked me up. I had forgotten about the promise of “live entertainment,” and all of a sudden, the multi-colored curtain went up like the one at Disneyland’s America Sings exhibit, with the vintage country band, Hello Trouble, already making music. It was actually kind-of exciting to see. Their sound level was just right for the venue, as well. 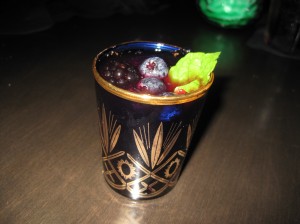 On the cocktail front, there were many interesting drinks. I’m sure you all know by now that I don’t drink (because I hate the taste of all alcohol,) but Lucia was happy to oblige. Of her favorite one, she said, “The Surley Sailor, (made with rums and fruits,) was the perfect combination of sweet and tangy, and was a refreshing pick-me-up for the end of a day. It was served in beautiful colorful glasses, too.” [Note: the establishment misspelled “surly,” not I. I guess they figure it’s too dark to see the menu anyway.] 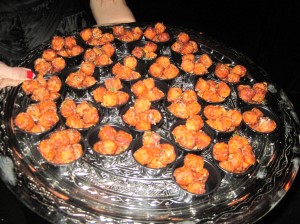 But, the most important thing to me–yes, even in a bar—is the food, of course! It was a few passed mini-treats and each one was more delicious than the one before. There were three different pizzas, including a clever Rueben one, cups of sweet potato tater tots, and flavorful sliders with caramelized onions.

But the food that intrigued me the most was a surprise–deep fried Oreos! I’ve actually never been a fan of the sandwich cookie, but I did eat them when I was younger just to separate the sides to see if I was lucky in love, or whatever that urban myth was in Brooklyn at the time. (I must have gotten the crème all on one side a lot to have been blessed with Mr. X. That’s no joke.)

I didn’t know it at the event, but when I researched deep fried Oreos, I found out that it’s a carnival food, which is just what the invite said would be featured at this fete! Who knew?! (I was even in a circus for awhile ,back in the day, and we traveled with a carnival, but I never saw them before.)

As much as I appreciated the dessert there, my respect grew as I tried to recreate them myself. Just the temperature alone was a challenge! And the consistency of theirs was perfect–chewy, and served with wonderful hot fudge sauce, which could have burned our tongues if not cooked just right. Pretty impressive for a bar!

I rarely quote press releases, but this one said, “Inspired by the traveling carnivals and fairs of the 1930’s, The One-Eyed Gypsy is Dana’s love song to the eccentric, an ode to the quirkily beautiful, and a calliope serenade to the gritty underbelly of nightlife.” She definitely succeeded in bringing her vision to life. The only thing missing was a fire-eater, and I wholly expect to see one there on my next visit. I just hope it’s at Xmas-time, so he can roast some chestnuts for us.