Trending
You are at:Home»DINING»DINING/NEW YORK: WARNING ABOUT BOGATA LATIN BISTRO
By Karen Salkin on May 29, 2014 · DINING, NEW YORK

I had wanted to try this Park Slope eatery for several years now. So when Betsy suggested we go there, I readily agreed.

The food was okay enough, (though nothing to write home about,) but the problems we encountered there added-up, with the last one being the last straw, so now I must warn Brooklyn-ites away from there. 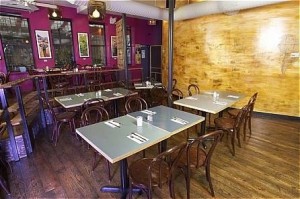 We went to Bogota on what my mother would call “a plain little Thursday night.” We were told that it was about a thirty minute wait, which is reasonable for that area and time of night (which was 8ish.) But when they seated us, we noticed that there were many tables available! Why did we have to wait for a half hour??? To work up even more of an appetite, and hence order more? Or, worse, to trick passers-by, who can see the waiting crowd in the window, into thinking they’re busier than they are? There was absolutely no reason for it.

On top of that, the TVs in the bar were playing some women’s softball game!!! In New York, during the basketball play-offs! And in the middle of a Yankees game against traitor Robinson Cano, and a Mets game against one of their big rivals, the Phillies!!! I had to ask them to change it, a girl from Los Angeles!

The only positive was the new manager, a tall man whose first night it was. And he was excellent. I really should have complained to him on the way out, but he’ll learn their ways soon enough; may as well let him have at least one good night on the new job.

Our waiter was weird to begin with, and then he abused me because it was so loud (another unnecessary problem) that he couldn’t hear that I was pronouncing his name right! (He told us it was something like “Akita,” and I pronounced it exactly as he did.) He needed to calm down—I’m sure most patrons aren’t even nice enough to address their servers by name, and he should have appreciated the effort instead of raising his voice to me. Especially when I was correct to begin with. [Sidebar: one of my agents has been letting the entire show biz industry mispronounce his last name for years now! I get upset, but he explains that it’s just business.]

Way worse than that, though, was that he grabbed my hand!!! It wasn’t in his way; it was just lying on the table, while I was ordering, and he grabbed it and held it! I was in shock that any stranger would touch me, but for a server to do it is beyond a no-no! I wish I had been brave enough to say something. Betsy’s face turned white when she witnessed it. So, not only did he offend me, but he scared a young girl!

It goes on from there. He kept trying to talk us into ordering more, telling us that none of the dishes we chose to share were enough to do that with. (Meanwhile, not only were we full, but we took home leftovers!)

Then we waited almost an hour for the check! We just kept asking different servers for it because—guess what—we never saw handsy-man again! He never came over to check on us or even refill our waters! He didn’t leave the premises, (we saw him walking around,) but he never got back to us. And we waited and waited for the check. I should have gone up and said something then, but Betsy and I have so much to talk about that we just kept waiting, like idiots. But fun idiots.

But here’s the pièce de résistance, (and I do mean that sarcastically,) one I really wish I could take back: my phone had only about a thirty-five percent charge when we arrived at the restaurant, so Betsy said to give it them to charge while we ate. Another restaurant had just done that for me a couple of nights before, (the first time I had ever seen it done,) so I realized that it’s a somewhat common practice in New York. (I guess because most people there don’t have cars to charge their phones in, they just bring their cords with them and plug them in wherever they go.)

She handed it to them with the cord, and it was no problem. (I was so happy that when we left we thought to ask for it back.) The guy behind the counter had trouble finding it at first, it seemed, (which is weird because it should’ve been right where it was plugged in,) and as he handed it to me, he looked at the case very weirdly, but I still thought nothing of it.

So I plugged it in normally when I got home, but noticed right away that it wasn’t charging, and now it was down to about twelve percent. I called Mr. X on the house phone and we tried it figure out what was wrong all of a sudden. I had several people coming over the next morning to help me move furniture out, etc., and I had no time to fool around with this situation.

As I was working on the phone, I noticed that the part of the cord where it plugs into the phone was kind of accordioning. And if I pushed it a certain way, I could get the phone to charge for second. So I realized it was definitely the cord.

So I had to get up at the crack of dawn the next morning, and search around Brooklyn for a place to buy a new Apple-approved charging cord. As much as I hate wasting money, I hate wasting time even more, and both situations were in effect that day.

I showed the cord to a couple of people in phone stores, and they pointed out that it had gotten messed-up on both ends. As we were inspecting the cord, we notice that my phone case was banged up on all four corners! That meant that someone at the restaurant had, I’m sure by accident, pulled it out of the wall with such force that it it not only got scratched and bashed-in all over the place, the cord got destroyed on both ends!

I do understand that I was charging the phone at Bogotá Latin Bistro at my own risk, and therefore, they wouldn’t technically be responsible. But I would have recognized that fact even if they had told me the truth. They could have even said that one of the servers didn’t see it was charging, and smashed into it, and they just wanted to let me know because I would need a new cord right away. It would save me a lot of time and hassle and energy.

And would’ve made all the rest of the bad experiences there a little bit better. At least I would’ve respected them somewhat for the honest heads-up.

So if you want so-so food, rude treatment, and downright abuse, go to Bogota in Park Slope. But, with so many other eateries to choose from in the area, why bother? Even if it was the last place on earth, I would never enter those premises again.

And here’s a tip—if you’re in Brooklyn and craving great guacamole, and every other menu item Bogota has, just go over to tiny Cinco De Mayo in Ditmas Park; the food is a million times better, so is the service, and the prices are about a third of those at Bogota! And it’s an overall excellent time there, especially compared to the former!

[Note: As a supreme fan of fairness, I did give the owners a chance to respond before I published this. I sent them a nice email and a copy of a draft of this article after I read their “mission statement” on their website, which declared, among other things, that, “We believe in doing business in a professional and orderly manner. We take great pride in developing and implementing systems, standardized procedures and being organized. We believe in being responsible to ourselves and to others. We do what we say we are going to do when we say we are going to do it. We believe in personal accountability and avoid blaming others when things don’t turn out as planned.” It also stated, “We seek continuous improvement. We believe that being good isn’t good enough. We never stop trying to better, no matter how good we believe we’ve become. We constantly strive to ‘raise the bar’ personally and professionally. We believe in honesty, trust and integrity. We work to build trust with each other, among those we serve and with the community at large. We recognize that honesty, trust and integrity form the bond that holds organizations and relationships together. We are committed to open and honest communication.” But, despite all those lovely intentions, I never heard back from them!]