Trending
You are at:Home»DINING»DINING/NEW YORK: OSO AT THE SOUTHHAMPTON INN
By Karen Salkin on July 5, 2012 · DINING, NEW YORK

OSO AT THE SOUTHHAMPTON INN

I’ve been reading about The Southampton Inn for a few years now.  So, it’s the first place I wanted to go on my only week-end in the Hamptons this summer.

My mouth watered as soon as we walked through the doors and saw the quaint lobby! And then I noticed the outdoor deck, and was in love with the place. It was exactly like the charming lodges and inns my family stayed at in my traveling summers when I was a kid. (I know—like I’m not still one now?) 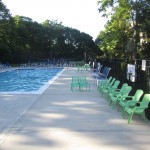 My friends and I walked through the grounds to get to the restaurant, Oso, although it can also be accessed from inside the inn.

Before we even ate one morsel on our first visit, (that’s right—more to come,) we already admired two things about this eatery. One is that there are three different choices of dining areas–inside, which is classy-looking; on the patio, with or without umbrellas; or at the poolside bar area. They’re all winners.

The other thing we took note of is the lovely premise; Oso is open 7AM-7PM, so that the inn’s guests can go to dinner elsewhere around town, if they like. Hence, it features an easy, casual menu, with something for all tastes. Lauren eats very healthfully, Scott is a basic food guy, and I could live on hot dogs. And we were all accommodated, without even any special requests! (Which, of course,we had anyway. Did you think otherwise? Have you met me???) 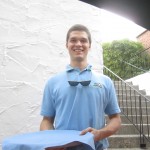 I’ll get to the very reasonably-priced food in a minute, but first I have to tell you about Jackson, our server. Every now and then, someone asks me what the most important aspect of restaurant reviewing is. My answer? “Cute waiters!” And we hit the jackpot on this one! Jackson was not only adorable looking, but he bent over backwards to please us, which we really appreciated, especially me. I had just had the week from hell in Brooklyn, (don’t ask–it was something straight out of Dateline, but at least not the pedophile one,) and to have a stranger be so kind was even more of a pleasure than usual.

The chef, Kurt, whom we met later, also was most accommodating with our requests. Interesting note: My friends recognized Kurt immediately from being an expert cheesecake baker! Although there was none of that at Oso, the desserts were fabulous, but you have to wait to hear about them for a few minutes because we have to get to the main chow already!!! 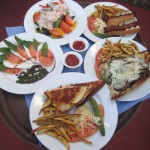 This is just some of the food we ate!!!

Lauren and Scott were impressed with the very generous portion of “extremely succulent” lobster salad, which you can also have on a roll, if you prefer. They said it was “flavorful” and “excellent,” with the “perfect amount of all ingredients.”

They also loved the pinwheels (a fun category on this menu) with salmon, cream cheese, and capers. And they went to town on the sliced steak with mozzarella sandwich; I had only some of the juicy garlic baguette it came on, (by choice,) and loved it, too.

Then my choices kicked in. At an early age, my mother taught me her love of hot dogs, and having grown up in Brooklyn, I find it hard for any others to live up to Nathan’s. But Oso’s order of “Two Lady Dogs” was perfect, on every level! I’m actually craving them right now. They were perfectly grilled, with attractively-cut ends, and served on buttery rolls that looked like regular toasted bread. They were accompanied by wonderful fries that were extra crispy, just the way we requested, and delicious cole slaw and pickles. This would have been my mother’s favorite meal in the Hamptons, by far.

We also ordered a “grown-up grilled cheese,” (their terminology, not ours,) with a choice of many cheeses. They let us mix Swiss, goat, and cheddar, even though I’m sure most other customers choose just one. Lauren said it was “magnificent,” and said to order it with their homegrown-right-on-the-property heirloom tomatoes. 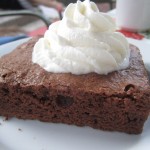 You wouldn’t think that we could fit in any more food, but you’d be wrong. Scott said that since they have that chef who specializes in baked goods, we just had to try them. Even though I love chocolate, I’m not a fan of brownies, but this giant one was incredible! And the carrot cake was nice and light, with a “great touch of coconut.” I even loved their basic chocolate and vanilla ice cream scoops!

We enjoyed the entire experience so much that we went back two days later to try the brunch dishes. (And because I somehow divined that they had chocolate chip pancakes!!!) 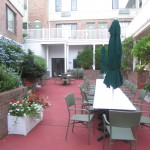 There were eight of us for Father’s Day brunch, and every single one of us was happy with our food.  And, we got to be situated on the patio so those of us who wanted sun on their faces had that, and the smarter ones of us avoided it, all at the same table! (Yes, I do know I just said how dumb it is to sit in the sun nowadays. But I say the same thing in person to my few pals who still do it, so no cringing necessary.)

We all began with the wonderful fresh OJ, (Scott rated it “superb!,”) and I thought it was really cool that the eight of chose at least five different dishes among us! That means there’s a great brunch variety. 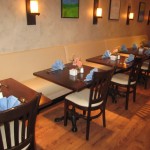 One order was just a toasted bagel, but the others were more interesting. Lauren, the health nut, said her granola with milk and fresh fruit was “out-of-this-world fabulous,” while the group that had the e-words benedict were too in heaven to comment as they ate! But my junior reviewer, Taylor Bennett, (who was an apt pupil on a review or two when I was the restaurant critic for the Culver City News,) emailed me after to say that “the E-Words Benedict was awesome, and the potatoes were deliciously seasoned!” We were all in love with their home fries, which were perhaps the best I’ve ever had. (I had to purloin a few from each plate.) 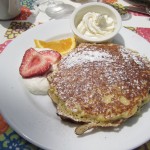 The best chocolate chip pancakes ever!!!

When I saw one of the guy’s French toast with a sausage patty, I did get a tad jealous for a second, but when I tasted my chocolate chip pancakes, with the absolute best homemade whipped cream ever(!,) I knew I had made the right decision. OMG! Seriously, I order them all the time, everywhere I go, and these one at Oso were the most delicious ones, by far. I ate the whole plateful, which never happens.

And I must laud the brunch servers for their pleasant and knowledgable service. Bobby, a graduate of UCLA, (yay!,) and Keri got nothing wrong, and even anticipated our needs. And Keri taught us how to make her unique design with the paper on the straws. Not that I can do it yet, but I’m still trying! And let me tell you, it beats the heck out of the snake I usually make with my straw wrappers.

I hope that nothing changes over there ever because Oso will still be my first stop on every Hamptons trip. My friends will be happy to hear that I may even stay there from now on! What better way to eat that great fare twelve hours a day?