Trending
You are at:Home»CHARITY»DINING/EVENT/CHARITY: MASTERS OF TASTE 2018
By Karen Salkin on May 29, 2018 · CHARITY, DINING, EVENTS

After having such a fabulous time at last year’s Masters of Taste, I was thrilled to introduce my new-to-LA pal, Lisa, to this outdoor food and beverage festival that’s staged on the Rose Bowl’s iconic field. She had joined me at that stadium recently for the Press Preview of MOT, but that event took place on the perimeter of the field, not right on it.  So this was a huge treat for her. And for the rest of the guests, as well!!! 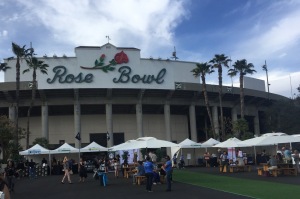 Photo by Karen Salkin, as is the big one of the field, at the top of this page.

In case you’re not familiar with it, Masters of Taste is a giant, super-casual charity event that features food and drinks from over forty restaurants, food trucks, caterers, and beverage purveyors.  It’s really overwhelming, in a great way. Even uber-picky eaters such as myself found very many dishes to enjoy. (The next day, as Lisa and I were on the way home from another fun event, I said, “I wish it was yesterday right now.” When she asked, “Why?,” my answer was, “Because we’d be at Masters of Taste, and I’m craving all that food!”)

Last year, it not only rained on the festivities, it also hailed! But this year the heat was the nature problem—it was blistering. Guess which weather I preferred? Ready? I’d much rather be cool and wet than be in heatstroke. But perhaps that’s just me. Not too many others seemed to mind an awful lot, actually, outside of the guests who were hogging the tables that were under the way too few umbrellas. (Hint, hint for next year, MOT organizers!)

Some of the food trucks at the entrance to MOT, on the top level, including the one I laud below. Photo by Karen Salkin.

The reason some guests didn’t notice the high temperature might possibly be because of the high volume of alcohol sponsors. And I mean that in a good way. Masters of Taste is really a great financial deal for imbibers, (but only if they have someone else drive.) They can drink as much as they want for three to four hours, (depending on if they come early for the VIP entrance,) and the best news about that is there’s plenty of food along the way to make sure no one is drinking alcohol on an empty stomach! That’s important. It’s been pointed-out to me at several cocktail parties this past year that people hate a drinking event that doesn’t also have food, because it’s dangerous to just consume alcohol without anything in your stomach to absorb that substance.  So MOT is the perfect event for partiers! 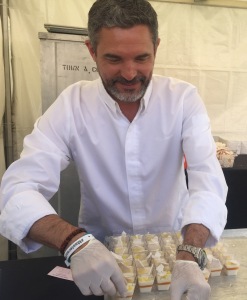 Lisa and I both really enjoyed the majority of dishes that we sampled, but, as always, we did have our favorites. Here are some of them:

Both of our absolute number one fave, which shocked me, was a fruity Tahitian vanilla panna cotta from Spring downtown. If we had sampled nothing else that day, it would have still been a success for us. And I swear, our admiration for that tasty treat did not have anything to do with the attractive chef, Tony! That was just icing on the…panna cotta!

My next faves were a trio of treats from the Eat @ Rollin’ Joe’s food truck, which was actually the first sponsor we saw as we entered the premises. Besides how delicious the mini Mexican offerings were, I really appreciate that Chef Mark and his associate were thrilled when I told them that their food was my second favorite of the day! I have a feeling that most others would have questioned why they weren’t first, so I was extra admiring of them that they were so happy themselves! 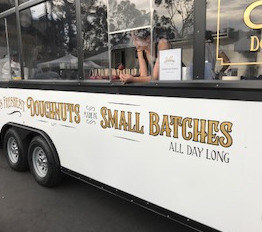 I don’t know if my readers know this about me, but my very first job in LA was at the famous donut shop in Westwood Village.  I haven’t been able to even look at, nor smell, one of those treats-for-others since then! So this pick, Sidecar Donuts and Coffee, is all Lisa’s, although I agree with her assessment that their truck is “adorable, with elegant gold leaf painted atop the white.” She said her huckleberry cake donut with “just enough huckleberry glaze,” and served warm, “really packed-in the flavor.”

And, once again, (as we did at the Media Preview event,) we were ecstatic with not only the delicious desserts from Porto’s Bakery, but with their generosity for giving each guest a platter of three full-sized treats. If you had seen how tiny the bites were from some of the other Sweets Masters, you would know exactly what I’m talking about! (At one booth, people waited on line for a half hour for a dollop, and I really do mean dollop, of ices!!!) 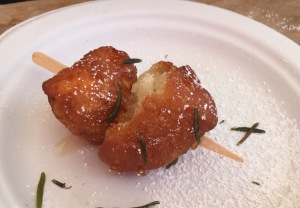 We were also in agreement about two chicken samplings. The very first thing we tried that day was the cleverly named “fried chicken ‘n beignets” (because the chicken is, indeed, in the beignet,) from Maple at Descanso Gardens. Lisa told me it was “heavenly,” and “the most delicious upgrade of chicken ’n waffles.”

The other chicken dish that we became fans of was Poppy + Rose’s buttermilk fried chicken accompanied by creamy mashed potatoes. Lisa said it was “exquisite” and “stole the show.”  She explains that the “chicken was tender and juicy, and the breading super flavorful and crispy.” She deemed this combo to be “tops on my list to try again!” 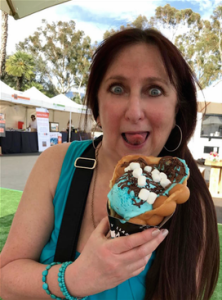 The prettiest presentation of the day was so huge that we couldn’t even come close to finishing it. (I wonder if anybody did.)  The VIPs who were interested received full-sized portions of waffles filled with creamy blue ice cream and a choice of toppings from The Dolly Llama. It was really way too pretty (and humongous) to eat, but the few bites I did try were delish!

I also have to laud the DJs. It seemed to us that there was different music on the field from what was playing on the upper level, right near the entrance. And we liked the music up top much better. Perhaps that was because there was also a breeze blowing through the area, and those tables all had umbrellas, so we were much more physically comfortable in that area.

The best news of the day, though, is that 100% of the proceeds from Masters of Taste will benefit Union Station Homeless Services, which is a nonprofit organization committed to helping the homeless rebuild their lives.  What a worthy cause!  Having that knowledge definitely made the food taste even better.

Now I can’t wait till next year to do it all again!  Hope to see every one of my LA readers there.