Trending
You are at:Home»DINING»DINING: MANDARETTE CHINESE CAFE
By Karen Salkin on October 18, 2019 · DINING

Years ago, when I had a TV gig on a national shopping show, (as a correspondent on every subject—don’t ask,) the head writer took me to his favorite Chinese restaurant in Los Angeles—Mandarette Chinese Cafe on Beverly Blvd. It was delish. Sadly though, since restaurant reviewing was my main gig at the time, I never really got to pay repeat visits to any place. But every time I’ve passed by ever since, I say a silent, “You go, Mandarette,” because so few eateries stay open for as long as this one has.

And now I’m happy to report that they’re celebrating their thirty-fifth anniversary this month!!! OMG! Do you know how rare that is in this town??? It’s practically a miracle. What a tribute to them. 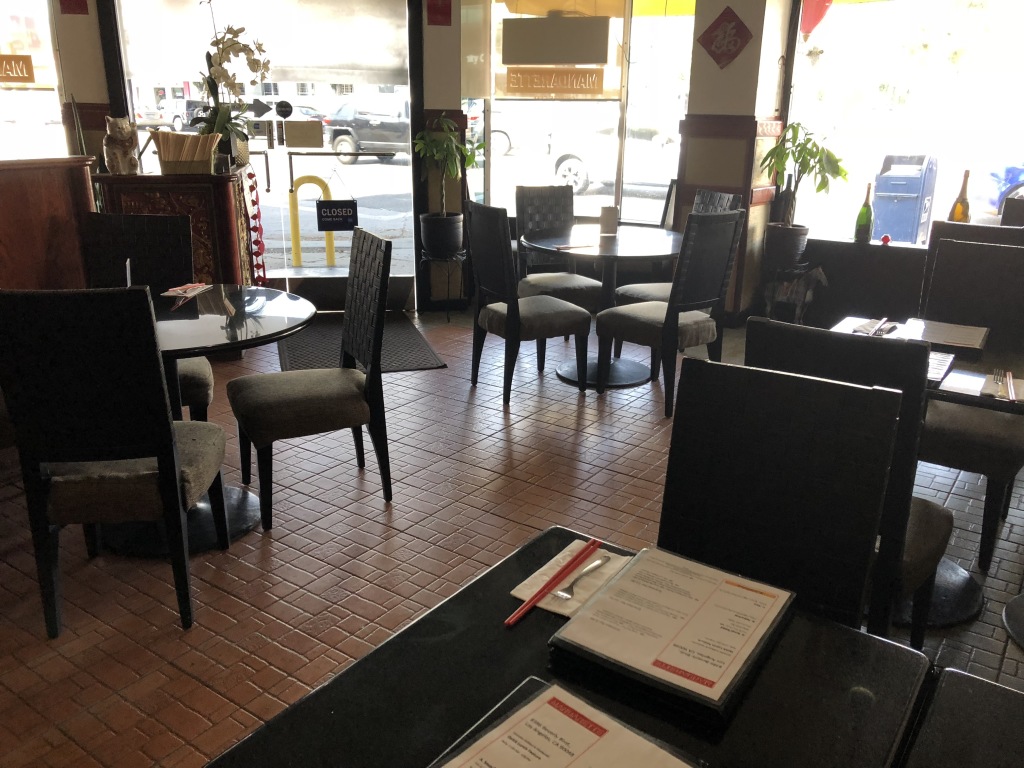 So, when my friend Noelle was recently visiting from Montreal, and yearned for quality Chinese food, Mandarette is the only place I thought of for our lunch.

And it was an absolutely lovely experience from start to finish. We were greeted by owner Ken Yang, whose history I knew a little about, but was fascinated to learn much more when I grilled him. It turns-out that his father was the co-owner and head chef of the Mandarin in Beverly Hills back in the day, and, in turn, created Mandarette as a much more casual offshoot of that uber-classy place. (Good move since Mandarette has thrived for so long after the Mandarin closed their doors about a dozen years ago!)

Noelle and I loved socializing a bit with Ken and also a friend I bumped into there who was picking-up her to-go order. But then Noelle and I got down to the business of eating Mandarette’s delicious fare. It was so good, in fact, that we decided to tell you all about it.

We shared two appetizers, two entrees, and two desserts, and had food left over for dinner. And there was not a weak dish in the sextet.

To celebrate their anniversary, Mandarette is also serving-up a few new menu items, which signs on the tables announce. But I was having a craving for some of their already-famous dishes I had recently read about, so we just went with those. However, I will definitely try the new ones on my next visit, (if they can tear me away from the one dish I absolutely want to marry—the Crispy Strawberry Shrimp! OMG! I’ll get to that one in a bit because you know that my linear mind has to go in order.)

We began our meal with the Shanghai-Style Lettuce Cups, which are filled with minced chicken, and are perfect. Noelle loved that the chicken itself is very savory. Since we were both exhausted from our crazy night before, we were thrilled that they came to the table already-assembled, which made it extremely easy on us. Usually Asian eateries make us do the work ourselves, which I am not a fan of.

They presented the Mu Shu Crepes the same way, so all we had to do was…dig in! You get a choice of meats or just veggies, but we chose chicken again, (which was kind of a theme for us that day,) and we loved the crepes. Noelle was very impressed with not just the quality of the chicken in them, but also with the inclusion of spinach, which neither one of us had ever seen before. And we both took notice of just how thick the crepes were—they were chockfull of ingredients. (Mandarette was kind enough to offer to nix the e-words in the crepes for me since I had mentioned that I’m not a fan, but I said to leave them in, and I just gave mine to Noelle, who adored them! She said those chunks were better than ones at other Chinese places she’s eaten. But I sooo admire that they cater to different tastes and food issues. More on that in a bit.) 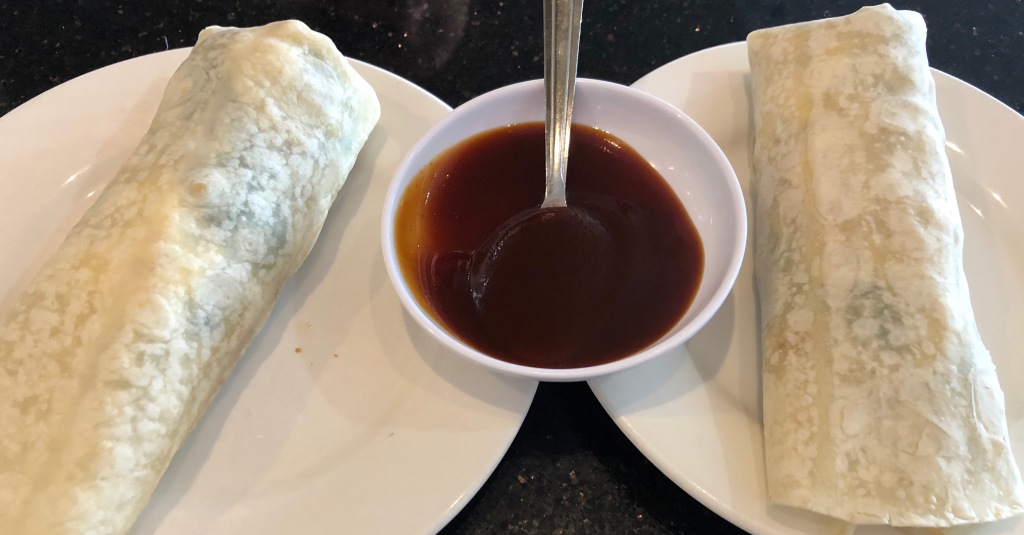 Here’s an interesting sidebar: I have not seen anything for $2.25 on an otherwise-normal-range menu like this one in probably three decades! But Mandarette serves a scallion pancake appetizer for just that price! I was in shock when I saw it! (There’s a horrible-but-hip place in Brooklyn called Purple Yam who once absolutely scammed me on the very same dish, charging me $12! And it’s just an ugly hole-in-the-wall, to boot!)

So now, back to the fabulous food of Mandarette.

As for the main dishes, I am now engaged to the Crispy Strawberry Shrimp. (It’s the one I told you I plan to marry.) Ken told us that it’s their signature dish, and I can understand why. Honestly, neither one of us had ever seen or tasted anything like it.  When it arrived at the table, and I noticed the reddish-pink sauce on it, I assumed it would be too sweet. But it’s not at all.  It’s actually absolutely perfect. Noelle said it’s “to die for,” while all I could mutter was, “Oh..ma…ga!” I can’t even describe it more than that—you just have to taste it for yourself. 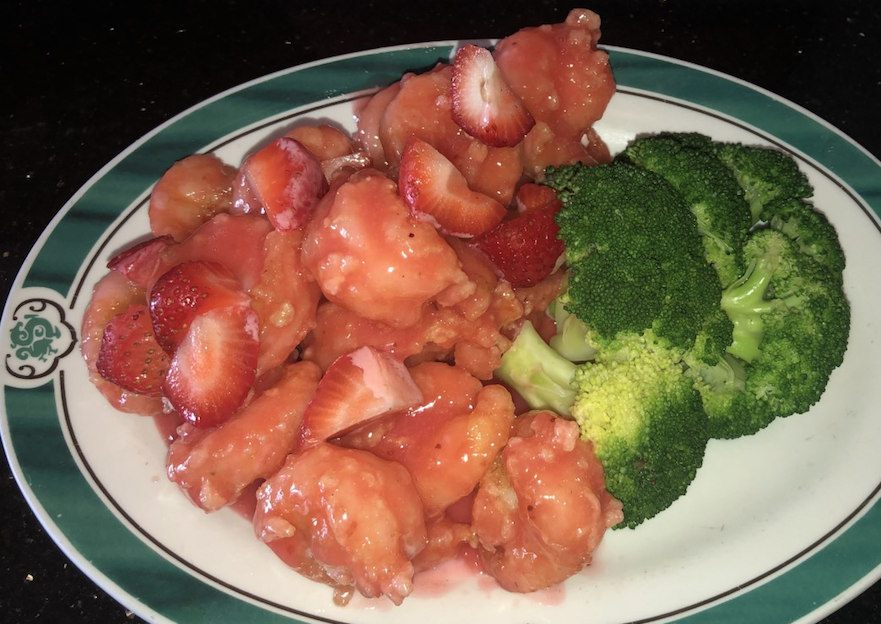 Making it even better is that it comes with a hearty helping of broccoli on the side. Noelle pointed-out that it has “the perfect crunch,” which she loves; she said it’s the opposite of that horrible wimpy broccoli that is served at many other restaurants.

Our other entrée was Noelle’s favorite Chinese dish–General Tsao’s Chicken. And she told me that Mandarette’s is the best she’s ever had, bar none! In her entire life of ordering it everywhere! I loved it, as well. And we both appreciated that the actual chicken was all nice white meat. We liked the presentation of it, too; it comes served on a high stand. (Maybe we liked that so much because it made the food closer to our mouths!) 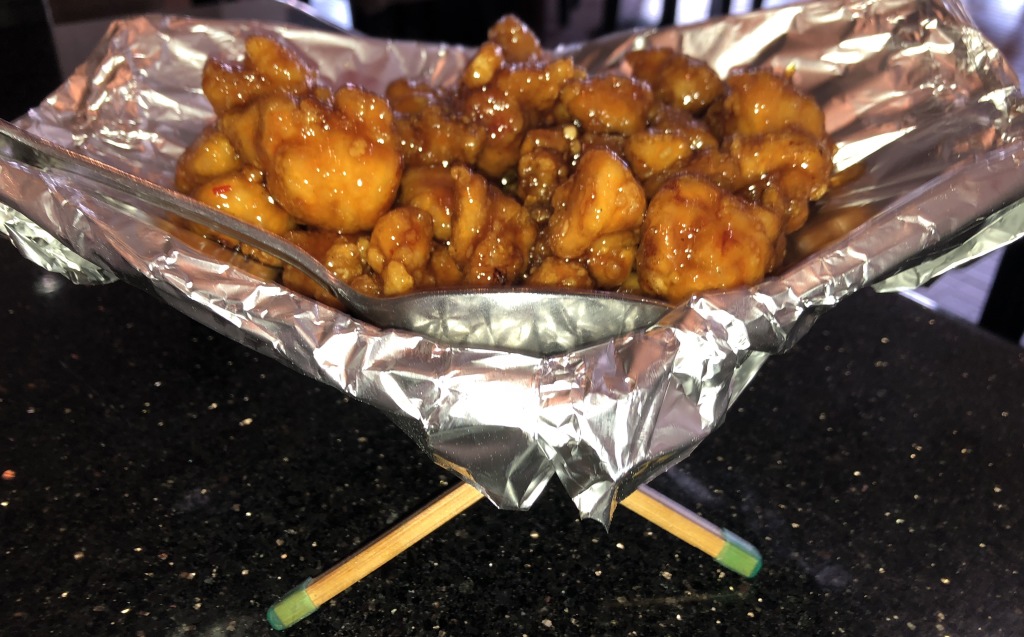 But the most interesting aspect of the whole repast to us was the desserts. I loved the Lychee Nuts. (Yes, I do know you can get that treat at other Chinese restaurants, but it’s especially lovely at Mandarette.) Here it’s served on ice in a tall cocktail glass; that coldness makes it especially refreshing.

But the  pièce de résistance is the Chocolate Wontons. I asked Noelle Hannibal what she thought of them, and all she could get out was “Yu-um!” It’s served on a plate as a quintet of flat, very crispy wontons; each has a little pocket of chocolate in the middle, and then they’re drizzled with chocolate syrup. The dollops of whipped cream in-between them add just the right touch. 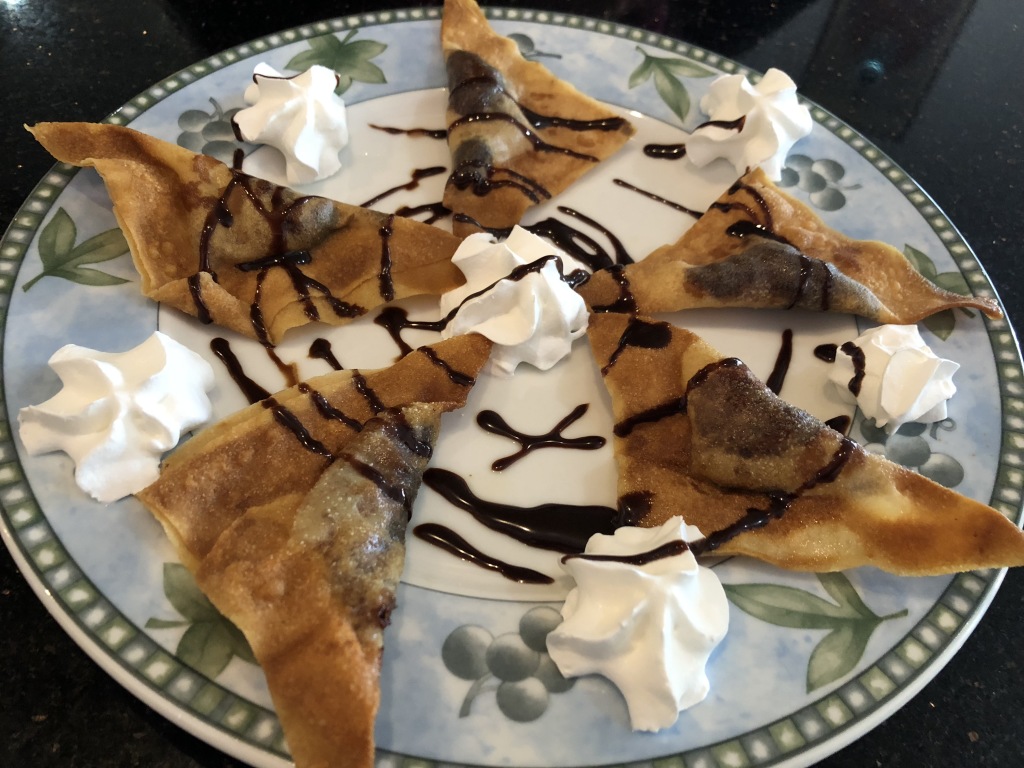 On top of all that deliciousness, here are some ways that Mandarette helps out in the area of their customers’ health concerns. One is that they have only one dish with peanuts! It’s called the Cold Summer Noodles. Ken explained to us that they keep the noodles quarantined so that there’s no cross-contamination over to any of the dishes. That is not only brilliant, it’s very thoughtful of them.

Another is that everything on the menu is gluten-free except for the soy sauce, which you can request to be gluten-free, as well! That’s pretty amazing.

And they use potato starch instead of breading, including on the General Tsao’s chicken. That might be one of the reasons we loved it so much! 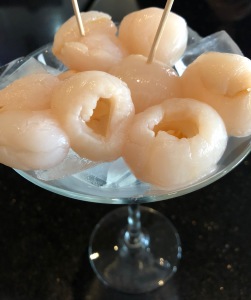 Okay, I have to stop discussing the food because I’m craving it all again right now, days later.

So let me finish-up by saying that the atmosphere is really pleasant. The seating arrangement is conducive to being both totally private and speaking with other tables, if that’s your thing. And there’s very light jazz playing in the background, the volume of which is just perfect—it adds to the overall enjoyment of Mandarette without being overwhelming.

And Mandarette also excelled in an area that’s of paramount importance to me—the service. Our server Kenny was right on top of everything. He even knew just when to bring us extra forks and napkins, without even being asked.

A better Chinese restaurant experience is not to be had in all of LA!