Trending
You are at:Home»DINING»DINING: LUNA GRILL
By Karen Salkin on March 11, 2019 · DINING

This is a first—I’m reviewing a restaurant I haven’t even stepped foot in! But it’s a cautionary tale of what happened to Mr. X and me with our recent pick-up order.

Luna Grill was awful from the get-go. I had eaten their not-so-great catered food at an event, during which they gave me a card for a free kabob at their eatery. 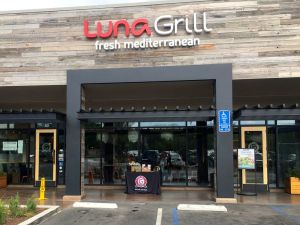 The Luna Grill in Sherman Oaks.

There’s a location in Sherman Oaks, which is not too far from me, near a place from which Mr. X occasionally picks-up food for himself, so to make it easy on him one day shortly after that event, I asked him to bring me lunch from Luna Grill. Again the food wasn’t particularly good, but it was easy, so when Mr. X was going to be in that ’hood again another month later, I ordered from there for both of us, and used that one gift card for the extra kabob.

And that experience was one of the worst ones I’ve ever had with any eatery, from beginning to end.

I called in our order. A guy answered, and I said I want to order several things to pick-up. As soon as I was done ordering the first item, he queried, “So is that it?”  I had clearly said several things, but I re-stated it for him.  At that point he told me that someone else would have to take my order, and he put me on hold for a little bit.

I gave the entire order to the next person, a girl, and and told her that I have a card for free chicken kebab.  I read the card exactly to the girl, just to be sure, and she confirmed that that dish would definitely be free. (And it was two months before the expiration date, so there was no issue there.) 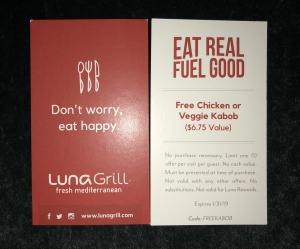 The front and back of the Luna Grill gift card. Notice that their motto is “Don’t worry, eat happy,” because that was the opposite experience for me!!!! And they certainly did not care! Photo by Karen Salkin.

After we went over the order again, with an emphasis on the comped kabob, (which I didn’t even want, by the way, but I figured it might come in handy sometime later that week, and Mr. X was going to Luna Grill for the rest of the food, so why not get it, as well,) she told me the total was $56.  I couldn’t believe it because we had just gotten two little lunch plates and two salads.  And this place is supposed to be relatively inexpensive.  I reiterated about the card for the complementary chicken, and she said that she included the comp in the total.

So poor shy Mr. X went to pick it up, and I could not imagine what was taking so long.  I called and asked him if he had gotten on the order line by mistake, as opposed to the pick-up line, which we did not need because we had already ordered on the phone.  He said that the order line was closed, so everybody had to use the pick-up line! And being that it was lunchtime, there were a lot of people in front of him.  (Great time to close the order window, right?!) So it took him over a half hour to just pick-up food that we had already ordered on the phone. Not good business, Luna Grill!

By the way, (and importantly to this tale,) Mr. X loathes getting anything free, and usually refuses to use coupons or gift certificates. But I showed him that this gift card is just a little tiny business size card, and that the girl said it’s already in the order.  So he was brave enough to proffer the card along with his credit card.  And you’ll never believe this–they told him that in order to use this card, he also had to have some other gift certificate!!!  When it clearly does not say that on the card.  And it was not true! 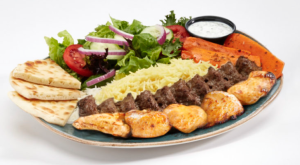 This is the picture on the Luna Grill website of what an order with the basmati rice looks like–almost entirely yellow from saffron.

So he finally got home with all the food, including that extra supposedly-free kabob that they made him pay for, and on top of everything else, the apple walnut salad is more than half empty!  And his grilled salmon was so awful he couldn’t even eat it! And the rice situation was even worse; when I had gotten it that one time before, it was all just white rice with a tiny bit of yellow (saffron) on top.  So I asked her to please make sure that this time it’s mainly the yellow rice, since I very rarely eat white rice. Her shocking answer was that the workers are told to put in just a little bit of saffron (which is what makes it yellow, and therefore appealing,) because the spice is expensive.  So the photos on their website are very deceptive. Luna Grill was very disappointing, all the way around. 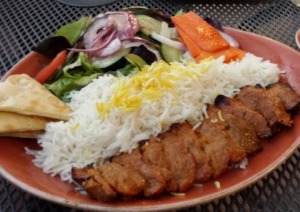 And this is the rice in actuality! See how little saffron they use? Shameful.

But back to the price issue. I looked at the bill, and they charged us $7.25+ tax for this complimentary chicken kabob!  And it’s actually supposed to be only $6.75, but that’s another story.

So I called the place again, asked for the manager, explained their error to him, and said that they need to take it off the bill. And he said, “Yeah, we have a new employee and she didn’t know how to do it.”  And that’s another falsehood because it was a guy who had charged Mr. X when he tried to give him the gift card, not a girl.  Then I was told that they can’t refund me unless I come in, so I would have to waste an hour more of my time on this. When I said they can just refund the credit card, as any business can do on the phone, he said I need to speak to someone higher up.  So they said the general manager will call me back.

It took days, but someone “in corporate” finally did call me back. He didn’t want to even give me his name, which is odd for a corporate person, but I did finally get that it was Peter, and he was very rude. And when I asked for his phone number, he gave me the one not for the corporate offices, (if there even are any,) but for that location of Luna Grill! And, of course, he told me that they could only refund me if I wasted more of my time going in. And he told me that Mr. X had refused their offer to take it off the bill right then and there, which was an outright lie! And, by the way, I didn’t get so much as a “sorry” from any of them!

Now, I didn’t need any more from them than to just refund the eight or so dollars that they had erroneously charged us. I’m nothing if not fair. But I have several pals who are either restaurant owners or managers, or do their public relations, and to a person they all say that at that point, Luna Grill should have either refunded me the entire amount of our bill, (because, in addition to that money, I had now spent about an hour of my time collectively talking to them on the phone,) or sent me a gift certificate for at least that same amount. And I agree.

But I received nothing but rudeness from the Luna Grill peeps.

So I hope this serves as a warning to all of you to stay away from that place. And, as a bonus, Mr. X and I found another place near their Sherman Oaks location, on Ventura, with the same type of menu, a zillion times better food, and better prices, to boot! And guess what it’s called? Saffron! If that isn’t kismet I don’t know what is!