Trending
You are at:Home»DINING»DINING: CITIZEN BEVERLY HILLS
By Karen Salkin on February 21, 2018 · DINING

During my birthday month of January, all I ask, in terms of gifts, of Mr. X is for him to go out to eat with me a few times. He always gives me material presents, as well, but he does accede to my dining-out wishes. (Don’t you just love that guy?)

And my nicest, most generous friends take me out to celebrate, too, and always insist that I choose the place. So, of course, being someone whose goal my whole life has been to eat at every restaurant in the world, (like that’s going to ever happen!,) I always choose eateries I’ve never been to before, with varying degrees of success, of course. 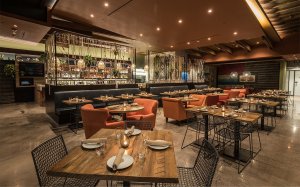 This is a good view of those torture chamber metal chairs!

So, Mr. X and I recently had lunch at the three-year-old Citizen in Beverly Hills, without very much luck there, I’m afraid.

So, to be nice, I’m going to give you my only two positives first. The guy who seated us was very pleasant, as was our waiter. And there’s a very inviting front patio, complete with couches and heaters.

But that’s about it in the “good” column. Nothing was dreadful, except for the seating, so let me get that out of the way now.

If you choose to sit inside, there are banquettes with the chairs opposite them looking like torture. They’re metal, made with a criss-cross pattern, with no cushions!!! OMG! There are a few big booths, that looked comfy, but since there were not many of those, and just two of us, we could not get one, although there were three other parties of two in them, one who came after us!!! (So maybe the host guy was not so nice after all. That just hit me.) 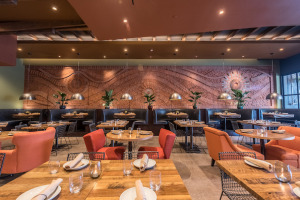 Click on this pic for a closer view of our exact table. It’s the one in the middle, with the uncomfortable orange chairs that you sink down into, and have to work really hard to get them closer to the table so you can eat! And notice the nice high-rise booths in the back, that every duo but us were seated in!

Instead, we were seated in the most head-scratching choice of tables and chairs I’ve ever experienced in a restaurant, especially a sort-of pricey one! The tables were in the middle of the floor, and meant for two diners only, to have room around them for the servers to maneuver. They were so long between us that we actually called each other on the phone to chat!!! We had to practically lie across the surface to talk to each other in person. Sooooooo uncomfortable!!! And the seats looked like big comfy lounge chairs, but, of course, our two had no arms, and were so low that my face was practically on the table itself! I was miserable in mine. (Even though Mr. X hates fusses in restaurants, I would have asked to sit elsewhere, but those metal chairs were even worse, and they said the booths were for bigger parties! So we were stuck!)

We perused the menu and tried to make the best of it. When we don’t like where we’re dining, Mr. X says we should just blow the food down and get out of there.

He ordered a Caesar salad to start, which he said was good enough, but…they put bacon in it! Who puts bacon in a Caesar salad??? Julius must have been turning over in his grave!

I ordered the tomato soup, which is something I usually love. But Citizen’s was just okay. It wasn’t bad; I just think that even Campbell’s is a bit better. But get this—the bowl came with exactly four little croutons! Could they spare it?! I had to ask for more, twice, and by then the soup was tepid. On top of that, despite the fact that we were not having sandwiches, they never brought us any bread! (And I even asked for it, so that I could make my own croutons!) 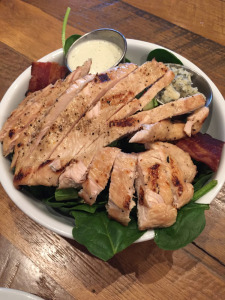 So then we moved on to our entrees. I had the Spinach Cobb Salad. (Don’t worry—I asked for the e-words to be left off—thank goodness they got that part right! Could you imagine?!) It was not very good, but it’s a salad so who cares? But there was no way to eat it! It came in a not very big bowl, with all the ingredients layered in there. Did they think I was going to eat all the chicken first, then all the avocado, and finish with all the giant leaves of spinach??? That’s just crazy! And they didn’t offer me another bowl or plate so I could sort-of toss it myself, nor a knife to chop it up with. So I just took it home, and spent about fifteen minutes working on getting it to where I could eat it. After all that, it really had no taste, and the buttermilk dressing was less than nothing.

Mr. X had the salmon, which he really is the expert on. He usually loves that fish everywhere, but when I asked him how this one was, he answered, “It might have been good…yesterday!” It was clearly left over from at least then. Ugh. And they served it with the skin on it, too, which is always sort-of creepy. 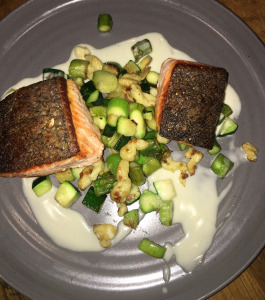 The day-old salmon. Not exactly an appetizing presentaion, either. And you do not want to know what they charge for this tiny portion of food! Photo by Karen Salkin.

But what were we to expect from a place that prides itself for putting peanut butter on its hamburgers?! Gag me with a spoon.

We ordered “fresh baked” chocolate chip cookies to take home, and after I ate mine, I said, “Well, they may have aimed to be cookies. But they’re really just tooth-threatening burnt bottoms.” That’s not very good for a Beverly Hills restaurant. How can a place this expensive mess-up basic cookies??? The best thing about it was that I wasn’t left wishing I had a second one! If I wanted a burnt cookie bottom, I could just make my own.

Despite all that, when a hip pal asked me to recommend a place in that area where a few of them could grab a bite before a party, I suggested Citizen. Why would I possibly do that, you may ask? Do I not like them? No—it’s because they drink and like hip places. I told them to sit on the couches on the patio because I think it would be very cool in the dark, and said to order only drinks and appetizers. I think it would be an interesting enough place under those circumstances. Just don’t ever sit inside and order a real meal.