Trending
You are at:Home»DINING»DINING: BRUHAUS ANNIVERSARY PARTY
By Karen Salkin on July 20, 2012 · DINING

Bruhaus, a casual restaurant/pub in West LA, had it’s one year anniversary party last week-end. I had never heard of it before I received the invite, but it sounded fun, so my friend Vanessa and I decide to squeeze it into a bunch of other already-planned events. And guess what? We loved it! Not just the party, which was really well done, but Bruhaus in general. 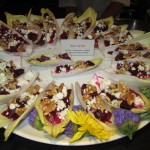 As they politely checked off our names from the list at the door, they did one of the smartest things I’ve ever seen at an event like this; they gave us each a folded paper that had all the info we needed for the evening, and beyond, including a detailed description of each dish being served, and a blurb about the young chef, Charlie Hwang.  The food list was especially helpful because Vanessa is a vegetarian and I’m just a pain in the butt, in the eating area. (And perhaps some others, but who’s counting?) 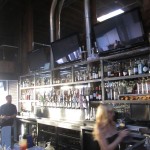 The place is just one square room, but it had a variety of seating areas; there were hightop tables and stools, big booths, middle-of-the-room banquettes, and the happening bar, where much of the action seemed to be.  Of interest was that the servers looked like guests, and had no attitude! And they were all girls!  How often does that happen?

Between the two of us, we tried just about everything on the menu that evening, and loved it all. Each appetizer had too may ingredients to list them all here, but my favorite was the skewered sweet potato tots wrapped in bacon, and Vanessa’s was the dessert of a puffed pastry with strawberries and absolutely delicious Bavarian cream. 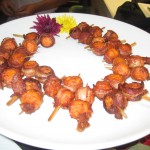 We noticed that, with one of the tidbits, there was what looked like a small bottle of ketchup, but it was purple. Upon further inspection, we saw it said ” Beetchup.” It turned-out to be their own version of ketchup, but made with beets rather than tomatoes!

Luckily for us, Charlie spent a lot of time with us.  He’s adorable, and he and I have a few things in common, including beginning our show business careers with an association with Lionsgate Films, and a love of food; in his case cooking it, in mine, eating it! He told us all about his conception of their signature beetchup. [Note: they don’t serve real ketchup at all, so if you have to have it with fries, which I do, you might want to sneak in a few packs when you eat there. But remind me sometime to tell you my horror story of sneaking whipped cream in somewhere. It’s a classic that I told on my show. The looks on the audience member’s faces was priceless.]

For those of us lucky enough to receive the happiest VIP wristband I’ve ever seen (and I’ve had more than my share of them) when we arrived, we left with a mini bottle of beetchup, a bag of homemade potato chips, and a beer glass. Simple and fun. Just like the rest of the party!

I’ll try to do a real review of their food later on this summer, but I can tell you now, I’m sure it will be all positive.