I had the most fun dancing in a Hollywood nightclub last week. But it was not with my club peeps—it was with a bunch of nine-year-olds!!!

Let me explain. The event was Just Dance Live, which is a live interactive show based on a video game that I used to see advertised on TV all the time. It turns-out that Just Dance is the #1 music video game franchise of all time! It’s been around for almost a decade, and is geared towards the entire family. So the audience for this live version was actually not just children; all ages were represented.

This is how the evening went: It was held at the famous Hollywood Palladium on Sunset Boulevard in Hollywood. As we walked in, our eyes were immediately treated to splashes of color everywhere we looked! There were characters from the game lining the red carpet, greeting everyone. Some people came dressed as the characters. Even the grown-ups!!! 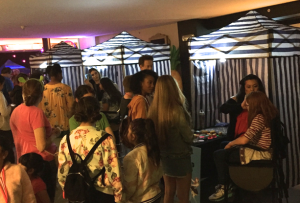 The pre-show lobby activities. Photo by Karen Salkin, as is the big one at the top of this page.

It paid to arrive early because there were several stations all over the lobby where audience members could get their faces painted and have their hair painted with day-glo colors (that wash-out, of course.) (You just know that I was tempted to do both of those adornments, but I didn’t want to take a turn away from a younger patron.)

Then the show took place on the Palladium’s massive dance floor. There were two sections of seats at the back of it, just in case someone needed a break from dancing, but hardly anyone sat down all night. Even I, with my broken back, was up and grooving the whole time! 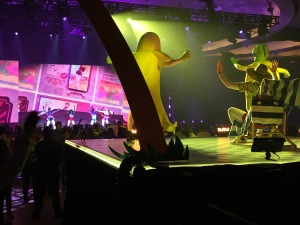 The view of the main stage (in pink) from behind the smaller platform (in yellow) at the back of the dance floor. Photo by Karen Salkin.

There was a main stage, with a smaller one in the back, for variety, and two elevated stands, one on each side, for even more interesting visuals throughout the night. The whole event was so comfortable in there.

The action began with a sort-of aerobics class session, to get the crowd warmed-up in the right way for the non-stop activity that was to come. And then the show began. And I’d say that about 99% of the assemblage knew exactly what was going on! 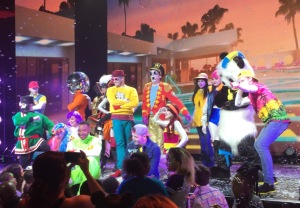 The cast at the very end. Photo by Karen Salkin.

The cast of over a dozen dancers performed the exact dance moves from the video game, on the various stages, and the audience joined them from the dance floor. It really didn’t matter if someone had never seen the game before; you either just followed along with the performers, or even just the person in front of you, or free-styled the whole time, which is what I did.

The music was all the original hits, and although every song was totally upbeat, I loved that so many different styles were featured. Alongside hip-hop hits of today and recent times, such as Happy by Pharrell Williams, Applause by Lady Gaga, HandClap by Fitz and the Tantrums and Bang Bang by Jessie J, Ariana Grande, and Nicki Minaj, there were throwbacks, including Sexy and I Know It by LMFAO, In The Summertime by Mungo Jerry, and Ghostbusters by Ray Parker Jr.  (You just know that I am not a fan of those last three, don’t you? But I didn’t even mind them too much in this environment because it was all so fun!) 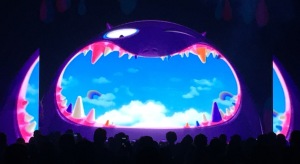 Just one of the very many colorful images on the screen. Photo by Karen Salkin.

And all the while, the most colorful images were splashed across the giant screen. You know that, of course, that was my favorite part of the proceedings! It was all so beautiful and creative! They even changed the foot-level backdrops of the stage in the back to reflect if it was a beach scene or whatever, complete with dry ice “smoke” for full effect. The effort that went into the visuals was the most impressive part of the whole presentation!

And even though the dancers had to do all the pre-set semi-easy moves all night, you could tell that each one is much more talented than this choreography demands. But they made all the steps look fabulous. 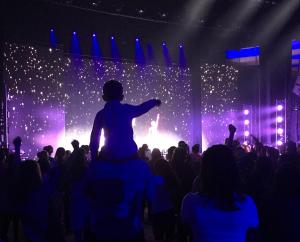 The little boy grooving atop his dad’s shoulders. Photo by Mr. X.

I have to admit that when I read the words “video game,” I was hesitant to participate at first. I always think of that genre as evil and dangerous. So I applaud the company Ubisoft for Just Dance. It’s refreshing to see a video game that’s not only none of those bad things, but is ultra-positive! This once encourages exercise, without the participants feeling like that’s what they’re really doing! And it’s designed for families, so it provides quality time for everyone to come together. Which is what they did on the Palladium’s dance floor! My favorite bit of the night was seeing a mother grooving away with her young daughter, who must have been about five, sitting on her shoulders, dancing away herself with her little arms. I could not take my eyes off her! And then Mr. X mentioned that his favorite image was of a similar scene, but this time with a little boy on his dad’s shoulders. (Those scenes made us glad we haven’t had kids; we’re not that strong!) 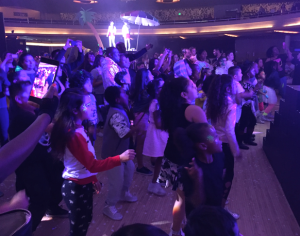 Just sa small sampling of the appreciative audience, with one of the two side platforms in the background. Photo by Karen Salkin.

I met two stepsisters, whose parents told me they don’t usually get along. But they were having the time of their lives, frolicking together in their matching ensembles, loving every minute of their shared Just Dance Live experience. Actually, that whole family came out to Los Angeles from New York just for this show, because that’s all one of the girls wanted for her recent birthday!

And the entire night, I didn’t see one frown! Everyone was upbeat, happy, smiling, and getting along. This was the perfect escape from whatever other issues one is having in life. I wish this event would be every night! I almost want to become a Just Dance Live groupie and follow them around! 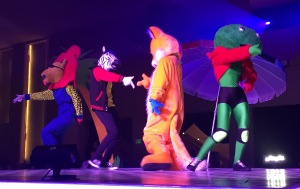 One of the cute numbers that were performed on the rear stage. Photo by Karen Salkin.

But, alas, I believe that LA was the last stop of the Just Dance Live Tour, even though I hope not. Every city needs a visit from this vibrant and important company. So make sure to look out for it, no matter where you live. And even if you’re a couch potato who hasn’t moved in ages, I suggest that you go to this show. It will benefit your soul, as well as your body!