I was absolutely thrilled to see Twyla Tharp’s Fiftieth Anniversary Tour at the Wallis in Beverly Hills last week-end. What an incredible accomplishment to be successful in dance for that length of time! I always feel that dance is the most underrated, unappreciated, yet most difficult art, so to be celebrating half a century of achievement in the field is that much more amazing. 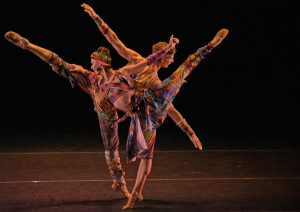 I had become a fan of Ms. Tharp when I saw her choreography for Billy Joel’s Broadway musical, Moving Out. Growing up in New York, especially as a young dancer, I was fascinated with Twyla’s name, (which is her real one, by the way.) But I didn’t see her work, that I was aware of anyway, until that musical came to LA in 2004. It was something special.

If you have knowledge of even just a bit of her body of work, you know that she doesn’t really need me, (or anyone, for that matter,) to critique her works. She should be reviewing ours! (And being a long-time New Yorker herself, probably does!)

But it’s my job, so here goes. As much as I enjoyed this recent show of Twyla’s, it was a bit yin-and-yang for me, which surprised me a tad. I wasn’t a fan of the too-quirky-for-me first full-act number, Preludes and Fugues, but I absolutely loved the second act, and wish it had been even longer than its forty minutes! My friend, Marcia, (who’s almost as big a dance fan as I am,) went berserk over both acts, though. 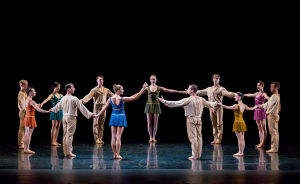 Photo by Sharen Bradford, as is the big one at the top of this column. Kaitlyn Gilliland, my favorite dancer, is the tall girl at the back, facing us, and the one in the hat, on the left, in the top photo.

She described Preludes and Fugues as “playful and whimsical,” while I found it to be like the obligatory exercise we all had to get through to get to the treat that was the second act. It just wasn’t my cup of tea.

But things picked-up immediately right after intermission with the fabulous, clever, and inventive Yowzie. It was sort-of a circus theme, which this former circus girl totally appreciated. I only wish the circus I was in when I was younger had been as much fun as this dance!

I felt that the dancers even enjoyed performing it a thousand times more than the first act, but that might have been the built-in performance emotions I was seeing. To a person, they all appeared to have so much more pep in their step in the second act.

And the movement seemed to more fit their skill set, and showed their talents off to much better advantage.

Also, the music in Yowzie, which was American jazz, was great, and disguised all the noises their feet were making in the first act, which annoyed me the whole time. We heard nary a peep in Act II.

Which brings us to a few words about this company of dancers. What a talented group! I absolutely loved that they were all different sizes and shapes, which is so Twyla Tharp. That diversity made it extra-interesting. And many ages were represented on stage, too. I get happy seeing dancers who are a bit older because I feel that so many aren’t hired over twenty-eight, which is really a shame. (Okay, don’t get me started on dance, in general. This company is doing everything right, so let’s just applaud that for now.)

Having said all that about age, the hands-down best dancer on the stage that night was Kaitlyn Gilliland, who’s most likely also the youngest, having just graduated from college this past Spring! Everything about her movement was spot-on: her feet, posture, hands, arms, head, neck, shoulders—you name it! I noticed her right away in the first number, and even though the second one was comprised of completely different movement, she shone in that one, as well.

In the guy department, I especially enjoyed Ron Todorowski in the circus dance. He was adorable, charming, and very fun to watch. He brought an extra spark to his work.  [He’s the guy on the right in the photo at the top.] 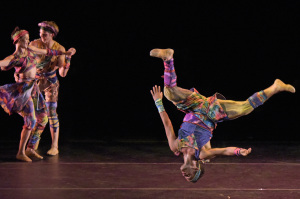 And the costumes for this one, designed by the the prolific Santo Loquasto, were magical. (If his name sounds familiar, but you can’t quite place it, he’s worked with Woody Allen on twenty-eight films!!!) There were all so different from each other, and perfect for the choreography and feel of the piece.

And then, it was all over too quickly. (It was a long-enough presentation; we just selfishly wanted to see more of Tharp’s wonderful work!)

The Wallis was actually the perfect auditorium to see this entertainement in. I’m a fan of this theatre! (It’s the Bram Goldsmith Theatre, which is the bigger one in that edifice.) Every seat has an excellent sightline, the lobby area is a fun inside-outside one, and even the restrooms are great! If you’re interested in any of this theatre’s offerings, I hope you take that opportunity.

It was a lovely evening, all-around. The anniversary show of an iconic dance company, a wonderful theatre, and beautiful Beverly Hills! What could be better?!