Trending
You are at:Home»DANCE»DANCE: MOVES AT THE MONTALBÁN
By Karen Salkin on March 22, 2019 · DANCE

MOVES AT THE MONTALBÁN

I just had the pleasure of seeing two of the trio of diverse shows that this new dance festival in town, Moves at the Montalban, had on offer. The description of it is that it “celebrates emerging talent in dance,” and that’s one of the things I love to see. 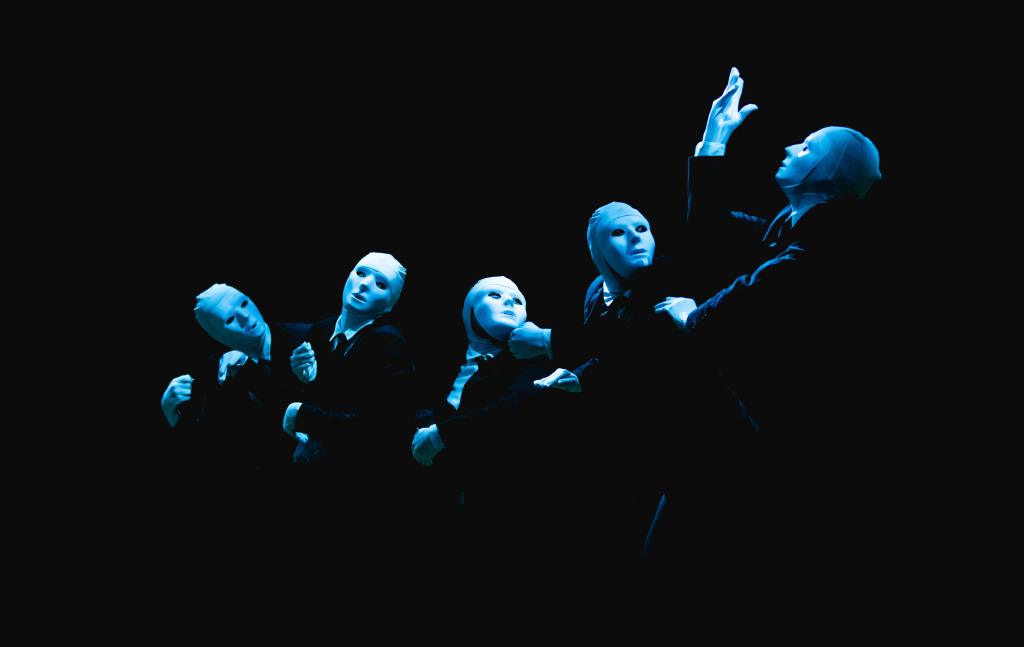 Dark Space, one of the interesting numbers on the first night. Photo courtesy of Break The Floor Productions.

I’m glad that I made the time to do so because it was most entertaining. And I love that venue!

Allow me to elaborate a bit on that last statement. On the last day of Moves at the Montalban, I brought my friend Marc, who had never been there before. But, as a fan of the show biz legend Ricardo Montalban, (whose loveliness I can vouch for,) after whom this theatre was re-named ten years ago, Marc was curious about the place. We arrived early so I could give him a tour of the fascinating multi-level edifice, including the art gallery mezzanine and the party venue rooftop. That was my first time up there in the daytime, so I had never seen the outdoor top level in so much light before! The artificial turf just popped, (and it was St. Patrick’s Day, to boot, so I loved all that rich green color!) And then the theatre manager was kind enough to give us a lesson in the history of the theatre, which we really appreciated. His name is also Ricardo, so I wonder if having that moniker was a pre-requisite of the job! 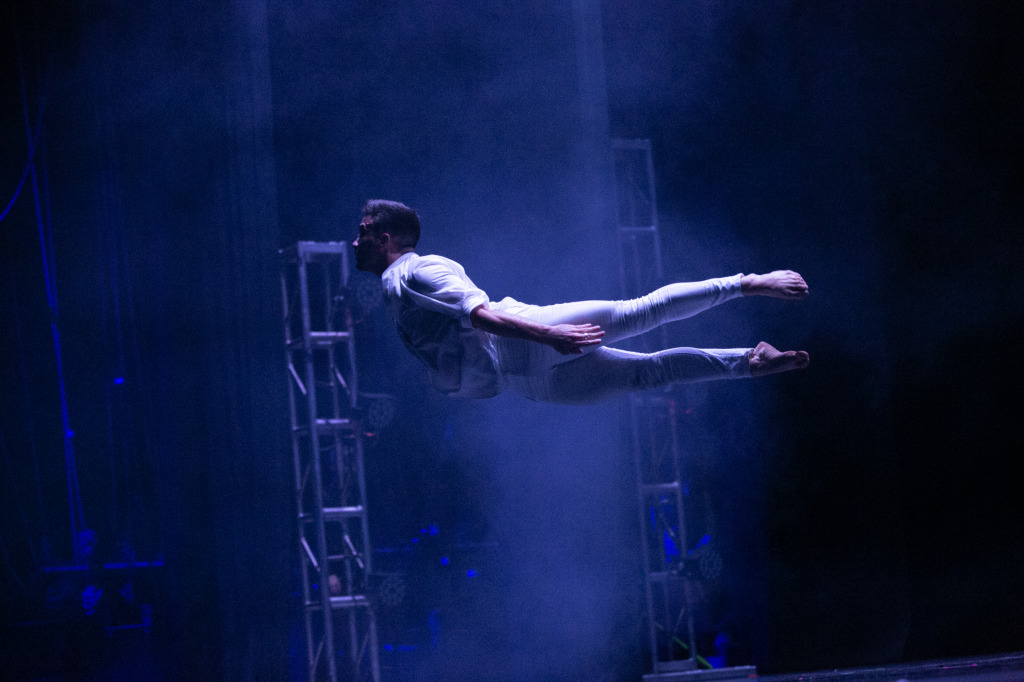 Lukas McFarlane. (And this is the right direction–he’s horizontal!!!) Photo courtesy of Break The Floor Productions.

On that final day of the festival, we were treated to three short unrelated pieces followed by an almost-hour-length fantasy contemporary dance by Lukas McFarlane’s company, choreographed by and starring him, in an all-white ensemble that we both loved. Even though his career resume indicates that he’s the darling of Canada and the UK, I was not aware of Lukas before, so I’m happy to be in the know now. 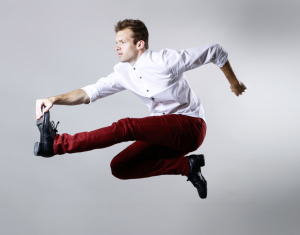 But, as a bigger fan of other styles of dance, I was more into the first night’s fare. It was a baker’s dozen of short numbers, curated by tap guru Nick Young, who had been a contestant on So You Think You Can Dance a few moons ago. He tapped a couple of solos, one on film to open the show, and a fascinating live one later on. His company, Rhythmatic, performed a couple of times that night, as well. And Nick’s closing remarks to the audience choked me up almost as much as they did him! That is one appreciative guy, which was nice to see.

I had two favorite numbers that night. The first was a fun jazz-hip-hop fusion by The Gentle Ladies. Their choreography was very upbeat and fun, and I loved that they were all doing the same moves, but each with her own personal flair. And all of their jeans-sweater-white-sneaks outfits were adorable! (I feel awful that no one took any pix of them be 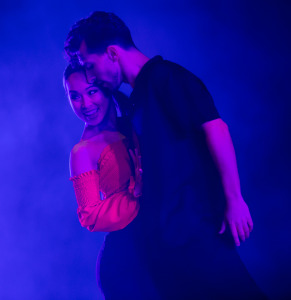 Koko and Kiki. Photo courtesy of Break The Floor Productions.

And the one ballroom number was absolutely fabulous! It was performed by two couples, but I had eyes for only the duo from So You Think You Can Dance a couple of seasons ago, Koine (Koko) Iwasaki and Kiki Nyemchek, who were two of the four finalists that year. (More on them in a minute.)

I appreciate how brief the shows were, so that no one could possible get bored or antsy. I doubt anyone would have, anyway, because the audience was populated by dance fans. They all whooped and hollered in exactly the right spots in the numbers! It was fun to be among them.

And after all three shows, the entire assemblage was treated to a fun soiree on the Montalban’s Rooftop. Of course, there was a DJ involved. After all, at least half the peeps were professional dancers, and I have a feeling the other half were recreational ones.

I loved seeing Koko and Kiki up there. I thought they looked especially friendly with each other, and I later learned that they’re an item! How did I not know that?! But I definitely approve. 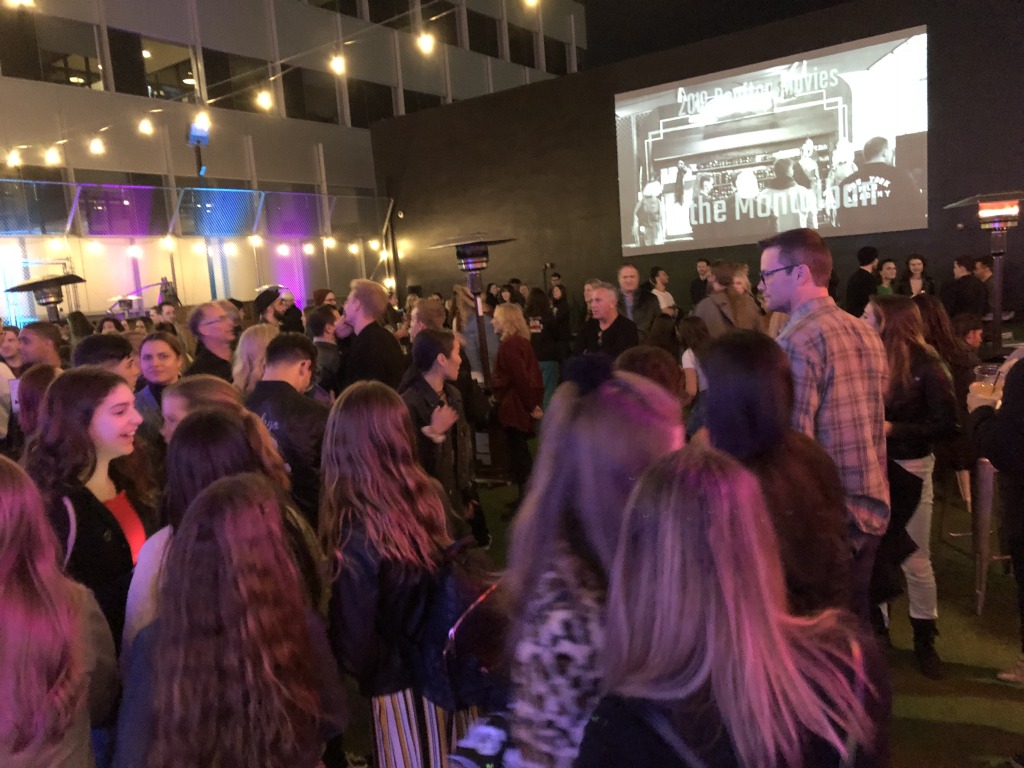 And on the way out, Mr. X and I had a fun conversation with hip-hop violinist Lindsey Stirling. (But you’ll have to wait for my next Celeb Sightings column, which should be happening in about a week, to learn what it was about.)

I only feel bad that I had to miss Saturday night’s show because, as usual, I was over-booked. But you know that I won’t miss any of this Moves festival next year! I already have it down in my book. (Yes, I do often plan that far in advance.) And so should you. Hopefully, I’ll see you at some of the upcoming offerings at the Montalban, such as the rooftop movies which are starting in a few weeks.