Trending
You are at:Home»DANCE»DANCE: MARTHA GRAHAM DANCE COMPANY AT VPAC
By Karen Salkin on May 4, 2015 · DANCE

I think that non-dancer viewers of So You Think You Can Dance erroneously think that “contemporary dance” is just a newer term for “modern dance.” But it’s really not. (Don’t just take my word for it–research it, like I did to make sure that I’m correct.) They’re two different disciplines, but rooted in many of the same moves. 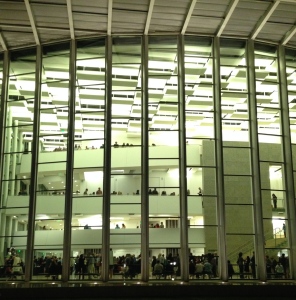 Because I’m such a fan of the beautiful contemporary form, I always forget that I was never very into modern dance, even when I was the one doing it! I was really a ballet dancer, but studied modern, too, first under pressure for my dance influencers in New York, and then as a dance major at UCLA, where Modern Dance was the core of the program.

But, when the famed Martha Graham Dance Company came to the Valley Performing Arts Center a couple of week-ends ago, I knew I had to see them. VPAC has become my favorite theatre in LA this year, and I love seeing anything there, especially dance. (My snobby pal who accompanied me didn’t believe me when I told her it resembled Lincoln Center, but as we walked to to the car and looked back at the lit-up edifice, even she had to admit it.)

So, even though this company’s offerings featured superior movement, I have to be honest and say I wasn’t a fan of the first half of the show. I had built-up my expectations so much, because I love dance, especially when it’s performed live, but had forgotten that much of this was choreography from over seventy years ago! Granted, I’m in love with classical ballet choreography, most of which goes back even farther than that. (The great Marius Petipa created his in the 1800s!) But Martha Graham technique is a totally different animal. 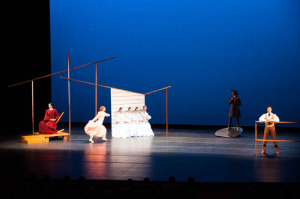 The first number was her iconic Appalachian Spring, which was celebrating its seventieth anniversary! Perhaps the age of the piece is why it could not have been slower. It was just not my cup of tea, and seemed to mostly be the classic “walk-around-with-purpose-with-an-occasional-hand-movement-with-a-serious-face” modern dancing. I felt the enthusiasm drain from my being watching it. And I knew I’d have to ‘fess-up to my seat-mate as soon as that piece was over.

The second section of the first act began with a short film of Martha Graham herself doing a weirdo number, which was actually kind of fascinating, and was followed by a trio of variations on it by current choreographers. The three newer ones were easier to watch, especially the last one by Sonya Tayeh, of whom I’m a fan. But it didn’t come close to the jaw-dropping choreo that I’ve come to expect from Sonya. 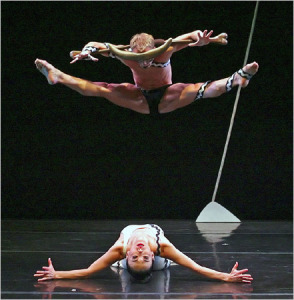 But the entire second act, which was comprised of two dances based on Greek mythology, was fascinating! The duet, Errand Into The Maze, choreographed in 1947 by Martha Graham herself, was danced with amazing strength and grace by PeiJu Chien-Pott and Ben Schultz. And the year-old Echo, choreographed by Andonis Foniadakis, and danced by mainly Abdiel Jacobson, Lloyd Knight, and Ying Xin, was stunning!!!

It’s no matter to me that I loved half and was underwhelmed by the other; I totally appreciated the experience of seeing this world famous dance company right here in Los Angeles. And I would choose to see them again, whenever I got the chance. 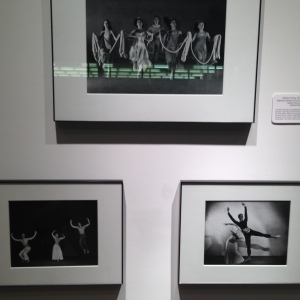 A trio of Barbara Morgan’s classic photographs from the exhibit at VPAC. (Those green lines in the top one are from the room’s blinds.) Photo by Karen Salkin.

As happens often with VPAC, some of the fun of the evening was the festivities surrounding the actual performance, and this time was no different. There was an open-to-the-public pre-show reception in the lounge, where the guests got the opportunity to view some beautiful and rare classic photographs of this company’s glory days, by Barbara Morgan, including many of the grande dame herself.

And then, when the two-hour dance performance was over, we invited guests re-convened in the same area. At this fete, we got to meet the talented dancers, and were treated to a Mediterranean buffet, and some jazz stylings by a trio of young guys, featuring adorable local singer TJ Wilkins of The Voice fame. Meeting him was indeed a highlight of the evening! 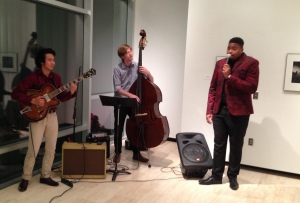 The trio, featuring TJ Wilkins on the right. Photo by Karen Salkin.

I look forward to everything that VPAC has to offer. Next up are two events that I’m sure will be excellent. If you’d like to see the amazing Yo-Yo Ma, you need to hurry because he’ll be there for one night only on May 6, in a Gala performance. He’s followed by Sierra Leone’s Refugee All-Stars on May 9, which I anticipate will be a really up-beat evening. Maybe I’ll even see you there!

For more info on VPAC and its schedule: www.valleyperformingartscenter.org