Even as a former dancer myself, and avid viewer of televised dance competitions, like So You Think You Can Dance and Dancing With The Stars, I never gave much thought as to where those dancers arose from. They were just all of a sudden here. I never traced their journeys to this point; only from this moment on.

But all that changed last week-end. I was invited to an event that mentioned dance, (and food!,) so I blindly went, thinking I was there to just see a show. But what I found was eye-opening indeed! 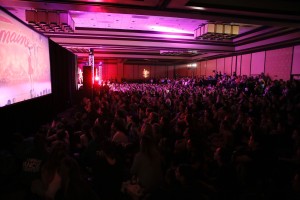 Look at this sea of eager-to-learn young dancers! Photo by Ryan Miller, as is the big one of Joe Tremaine and his faculty, at the top.

It was the Tremaine Dance Convention at the Airport Marriott. I get so many invites that I rarely have time to read the long ones thoroughly, choosing instead to just attend and live the experience. So, when my co-writer, Alice, and I arrived at the lower level of the hotel, I could not believe my eyes—there were well over a thousand people there, mainly kid dance students, (many with dance moms in tow.) And they were all there to learn from Joe Tremaine and his staff of professional dancers.

I was so glad to see so many youngsters still perusing dance, even though, in my opinion, it’s the most under-appreciated of the arts. Even the also-rans of singing competitions, such as American Idol, have a better shot at fame than the winners of So You Think You Can Dance! There’s just not a lot of call for solo dancers, except in ballet or modern dance companies. And even then, you get famous to only dance aficionados, not the general public. It’s such a shame. There’s no one to blame; it’s just the way of the world. (Of course, if, like Justin Timberlake and Chris Brown, you can move well while singing, then you’re golden.)

We got there in time to catch the very end of the week-end classes, and I was impressed to see one of the instructors give the kids some great advice. The last group did the combination he had given them, and when it was done, they just walked-off. So, he told them to “do something,” anything, to finish it off. Strike a pose, do a hair flip, something. When I was a young dancer, I always knew to do that, so I was shocked to see how many needed to be told. Hopefully, that once was all they need for the rest of their dance lives. That one little note can make the difference in who gets the gig. 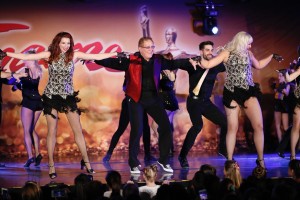 Joe Tremaine and his staff, treating us to a dance show. Photo by Ryan Miller.

Once the two-day workshop was over, (including the awarding of several scholarships,) the assemblage, including many luminaries of the dance world, was treated to a show danced by Joe’s faculty and star students, featuring many styles of dance. It had everything from the classics, like ballet and tap, to the more sought-after jazz and krump. There was even a brief six-contestant hip-hop contest.

When that was all done, the VIPs moved into a private room for the post-show reception. I had met Joe very briefly once before, at last year’s World Choreography Awards, (whose moniker I’m partially responsible for, by the way. The producers were calling it the World Dance Awards, but after I attended it in 2014, I told them they should change to the name to reflect the fact that all the awards were for the choreography, and not the actual dancing. And I’m happy to report that they listened to me, and changed it!) So I was happy to make Joe’s acquaintance again, on the way into the reception, and to learn of his inspiring motto: “Dance training is life training!” That’s what I always say, too, only not in those exact words. 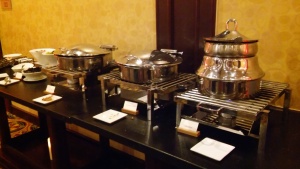 The reception was lovely, and featured food that was delish, and spot-on for in-shape dancers. No sweets at all, and even a make-you-own nachos bar, rather than the more caloric taco one. (Same ingredients almost, except only chicken filling instead of beef, and they switched-up the more carb-laden tortillas and taco shells with corn chips, of which you need fewer, if any at all! The chicken and attendant fixings were enough. Great idea.) 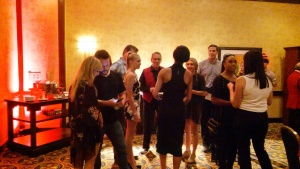 Joe Tremaine, in the red vest, surrounded by his party guests. Photo by Alice Farinas.

There was also an area with mini-burgers and tiny hot tidbits, like artichoke quiches, and another with cheese and crackers and fresh fruit with yoghurt-honey dressing, which made the perfect dessert for this fit crowd.

We loved seeing all the gorgeous shoes that the young female dancers were rocking, along with shorts “rompers” that seemed to be the uniform of the day. It was a really fun time, all the way around.

If you’re a young dance student elsewhere in the country—no worries. Tremaine Dance Conventions are in dozens of cities around the country all year, so you can hopefully find them soon in your ‘hood.