Trending
You are at:Home»DANCE»DANCE: GUSH DANCE SHOW
By Karen Salkin on June 1, 2015 · DANCE

I just had the fun experience of seeing a dance show up-close.  That’s because the Highways Performance Space at the 18th Street Arts Center in Santa Monica is the perfect venue for doing just that.  It was a good evening in all aspects–an interesting dance troupe, a new (to me) theatre, and mouth-watering art on the walls! Let me tell you about all three components to the evening:

Gush was performed by a group of dancers from the University of Iowa, (one of the few states I’ve, sadly, never visited.) Most are undergrads, but some have already graduated. How fun it must have been for them to come to LA for a two-night performance!!! I love stories like this! 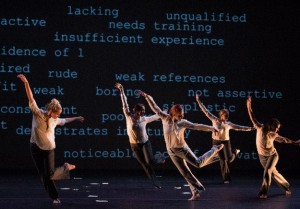 The company of Gush. Photo by Alex Bush. All dance photos courtesy of Gush.

They’re all excellent dancers, led by choreographers Jennifer Kayle and Charlotte Adams. Their style is more Modern-Dance-mixed-with-Experimental than it is Contemporary, which means there’s a lot of exact movement, but not enough fluidity, for my tastes, anyhow.  And there was a lot of talking in the majority of the pieces in this show, which I’m never a fan of.  (There was some chatter in at least three of the five numbers.) (There was a lot of littering the stage in some numbers, as well, which always makes me nuts. But they cleaned it all up each time. Maybe they need to come to my house next time!)

But all that is just personal preference for me.  You have to realize that I come from the world of ballet, afro-jazz, and hip-hop. There’s no stopping and walking, no matter how artistically, in any of that trio! (On my first day as a dance major at UCLA, I was shocked to discover that it was all Modern, and not Ballet! And Modern is just not up my alley, to do or see.)

I, of course, noticed all the excellent work, and applaud them for it. And I seriously loved seeing it performed right in front of me.  That was an amazing experience.  You rarely get that chance unless you’re in a class with other dancers.  We could see every bead of sweat, and hear every breath.

Despite the style of dance being not my cup of tea, I know there were many in the audience who loved the program.  One guy told me that he thought there were “a lot of great moments in that show.” He added that, “They had me at the plastic bag dance!” (That was part of the first number, Smoke-Screen. I was just wondering where they got so many plastic bags in Los Angeles, where they’re outlawed! They must have brought the bags with them from Iowa. I was jealous.) The same guy was also a fan of Five Rejections and a Funeral. And, even though I wanted a none-speaking dance performance, the pal I brought enjoyed the acting of Zach Bird in the last number, Beyond Anatomy. 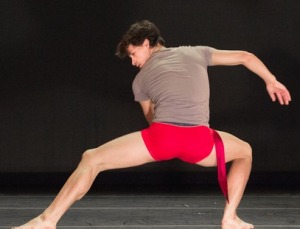 Anthony Pucci. (I swear, I looked everywhere for a picture of his FACE, to no avail.)

And, let me tell you, getting to see gorgeous Anthony Pucci dance in his red underwear was worth the price of admission alone!  That guy needs to be a model, ASAP!  I could barely take my eyes off him!  And his beautiful to-die-for hair! (He needs to lose the stupid septum ring, though.  I kept thinking his nose was running!)  His dancing was beautiful, too.

My favorite girl was Emily McElwain, who performed even tiny hand movements with precision. (She’s the one on the very left, in the group picture, above.)

And I absolutely loved all the wardrobe!!! (They can’t really be labeled “costumes” because it was all fabulous attire that we fashionistas would proudly wear out of the house.) Even the visible underwear was perfect! I was such a fan of it that I just must laud the women who put it together: Heidi Henderson, Juliana Waechter, Margaret Wenk-Kuchlbauer, and Jill Beardsley. Each one can be my stylist anytime! Mad props, ladies! 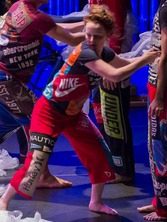 Just one of the fabulous wardrobe changes.

This whole show was a major collaborative effort, and I was impressed with the musicians, as well. Most of it was pre-recorded music, but, we had the pleasure of hearing, (and seeing) musicians Jason Palamara (who also composed quite a bit of the scores used for the evening,) and Justin Comer, right there, to my side of the stage. Nothing beats live music to dance to!

A fun surprise was that none of the troupe looked like dancers.  Not in bad way; in a good one!  They all looked like regular people, without that sickly, sinewy look that dancers often have.  They all had more healthy, in-shape appearances.  As a matter of fact, when I first noticed Emily, I thought she was a girl who had helped me in a yoga attire shop that day!  And working in a place like that, everyone looks healthy and glowy and in shape.  That’s what I mean. And when they danced one scene in underwear, there was not an ounce of fat anywhere! That made me even more envious than their possession of so many plastic bags! 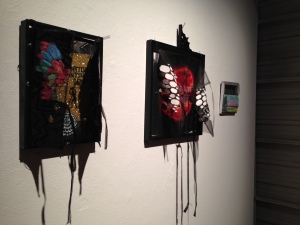 Some of the artwork of Jason Jones. The one I especially love is the tiny on on the right. Photo by Karen Salkin.

Even with the wonderful dancing, my favorite part of the evening was discovering artist Jason Ellenburg Jones, whose art installation adorned the walls of the lobby.  The instant I walked in the door, I noticed a beautiful, tiny framed outdoor scene on one wall.   I ran right over to it, and was shocked to discover that the trees were made from screen material, and the beautiful pink mountains were paper!  What a genius this artist is!  You know that I rarely get this excited over something, so, when I tell you it’s great, you know it is. I even woke up thinking of this piece the next morning!  (When they made a pre-show announcement that they would be raffling it off, I let out an embarrassing audible gasp!  Keep your collective fingers crossed that it will be my lucky day.  And then stay tuned, because I’ll announce if I’m victorious.)

Then I turned the corner of the lobby, and there was a gigantic material masterpiece!  It was a “patchwork cloud” made (to my untrained eye) of mesh, ribbons and staples!  I’ve never seen anything like it!  Jason Jones is the guy to commission if you have major wall space. (You know I love it all by the number of exclamation points I just used in these last two paragraphs.)

The show had two brief intermissions, so we were all able to admire the art several times.  I don’t know which I had bigger eyes for that night–the tree and mountain painting, or Anthony Pucci in red underwear!  It’s a close contest. (At least no one can ever say that I don’t have an eye for beauty!)

I had never been to this delightful little theatre before, which is sort of hidden in Santa Monica. I loved the whole experience! The personnel were lovely and welcoming, the actual performance space was perfect, the seats were even comfortable enough, and the lobby area was perfect for mingling. Even the outside of the building gave me a warm feeling! I can’t wait to go back there for another show!