Trending
You are at:Home»DANCE»DANCE: DADA MASILO’S GISELLE
By Karen Salkin on April 16, 2018 · DANCE

First of all, I can’t thank The Wallis in Beverly Hills enough for bringing so many dance shows to us Angelenos! I appreciate it all. 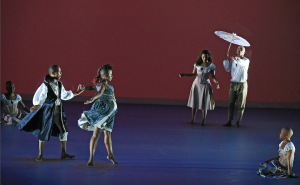 Photo by Kevin Parry, as is the big one at the top of the page.

And this past week-end, we got to see something truly special. Resplendent South African dancer and choreographer, Dada Masilo, and company performed an entirely new take on the classic ballet, Giselle. I’ve never seen anything quite like it.

Wow.  Just wow.  I’ve seen Giselle countless times in my life, but never like this. This choreography is its own unique style.  It’s mainly a mix of contemporary dance and ballet, with some afro-jazz mixed-in. There’s even some chatter, most of it for comic effect. And it’s all seamless. 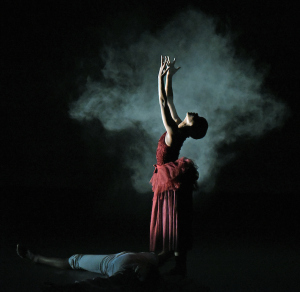 And, since no one is just ever walking across the stage here, (as happens with most classical ballets at one point or another,) the action moves right along. So much so that this company tells the whole sad tale in under an hour and a half, including an intermission! That’s getting it done for you!

Many of you may know how much I hate any kind of change, (unless it’s my weight decreasing,) but this presentation was great. It’s still the basic story of Giselle, but with way different choreography and music. And it’s performed on just a bare stage with a few projections, and one ending visual effect that’s stunning. (Here’s a clue: LeBron James fans will love it!) 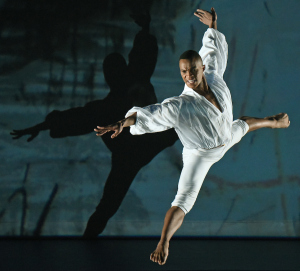 And, oh yeah, a way different ending, period. The quick story of Giselle is that she dies (of a weak or broken heart, or of going mad—depends whose writing you accept, but it doesn’t really matter—all you need to know is that she dies at the end of Act I,) because she fell in love with a guy (in this case, the beautiful Xola Willie,) who was already engaged to another. So, in the second act, she falls in with a bunch of deceased love-rejected women, known as the “Wilis,” (which is what Mr. X says I have in the middle of the night when I scream from a nightmare,) who make men dance until they, too, die. In the classic ballet, Giselle’s love for her ersatz beau spares his life.

But not in this version!!! Oh no no no no no. This is not your grandma’s Giselle–get your revenge, women! (Unless you’re Khloe Kardashian, that is. I think she needs to channel Dada Masilo ASAP!)

There are only a dozen dancers in this entire presentation, but, somehow, it seems like a lot more. They all change costumes so quickly in the first act, which makes it appear like a lot more characters are coming and going. And in Act II, the half dozen males double as Wilis in dresses, which, in this case, doesn’t really seem strange. As a matter of fact, the Queen of the Wilis is danced by a male, the forceful Llewellyn Mnguni, but it makes no difference whatsoever. Gender doesn’t matter much in this one. 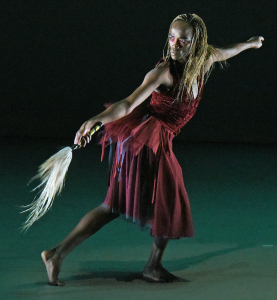 Llewellyn Mnguni as the Queen of the Wilis. Photo by Kevin Parry.

I really have nothing profound to add to this review. This Giselle is fabulous, innovative, riveting, and worthwhile. And tiny dancer Dada herself is striking. If you ever get the chance to see any of her works anywhere, I heavily suggest you go for it.

I do have to tell you that there is a bit of nudity in this Giselle. It’s actually more than a bit; Dada dances topless for a couple of sections of the first act, and by the end of it, all she’s wearing is underpants. Stuff like that usually bothers me, (unless the chiseled person who’s naked is a guy!,) but all I could think of is her 0% body fat!!! OMG! That is one perfect petite body! 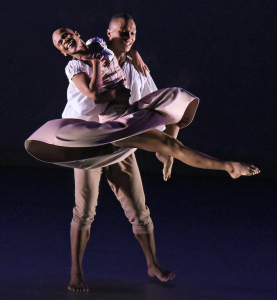 As I was watching Dada’s top open up early one, the recent Olympics Ice Dancing competition flashed before my eyes, (where the French girl’s top came undone and fell partially down her chest, and she and her partner basically lost the gold medal because of that snafu.) I felt awful for Dada. I whispered to Mr. X, “Oh no—her boob’s coming out!” But in the very next scene, her whole top was whipped-off! I remember with horror an episode of my former TV show when the audience told me they could see my white bra through my black gauze-y top. I’m still mortified about it a decade later. And even now, I can barely take a shower naked, let alone leap through the air! But Dada is the person who choreographed this show, so I applaud her body-confident self. You go, girl! (I finally figured-out what she was going for with that spark of creativity, but it took me a few days.)

I understand that she’s also given her special new-vision treatment to a few other classics, (Carmen, Swan Lake, and Romeo and Juliet,) and I just hope that I get to see them all someday. (Wallis booking people—I’m talking to you!) 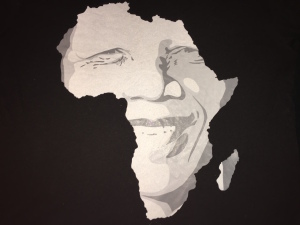 The front of the shirt I wore that night. Photo by Karen Salkin.

This is just how nutty I am, by the way—I was almost late to the theatre because in all my giant wardrobe, (I’m a clothes hoarder,) there was only one top I wanted to wear. It’s a shirt that features a map of South Africa with Nelson Mandela’s face in the map. I figured it would show respect. I finally found it, just in time, but I think I was the only one at the Wallis who cared about that bit of personal tribute. (I’m still glad I made the effort, though.)

As usual, I have a thought on The Wallis to share with you. It hit me while Mr. X was looking through the theatre’s upcoming schedule in the program–The Wallis is like this e-zine…eclectic! No wonder I appreciate that venue so much! And I look forward to whatever category of the arts they’re sharing with us next.