Trending
You are at:Home»DANCE»DANCE: BODYTRAFFIC AT THE WALLIS 2022
By Karen Salkin on October 25, 2022 · DANCE

BODYTRAFFIC AT THE WALLIS 2022

As I let you know a couple of weeks ago, BodyTraffic, an LA dance company, performed at the Wallis over the week-end. From what I understand, this is one of the most popular dance troupes in Southern California. So much so that movie star and dancer supreme, Shirley MacLaine, came out to see them! 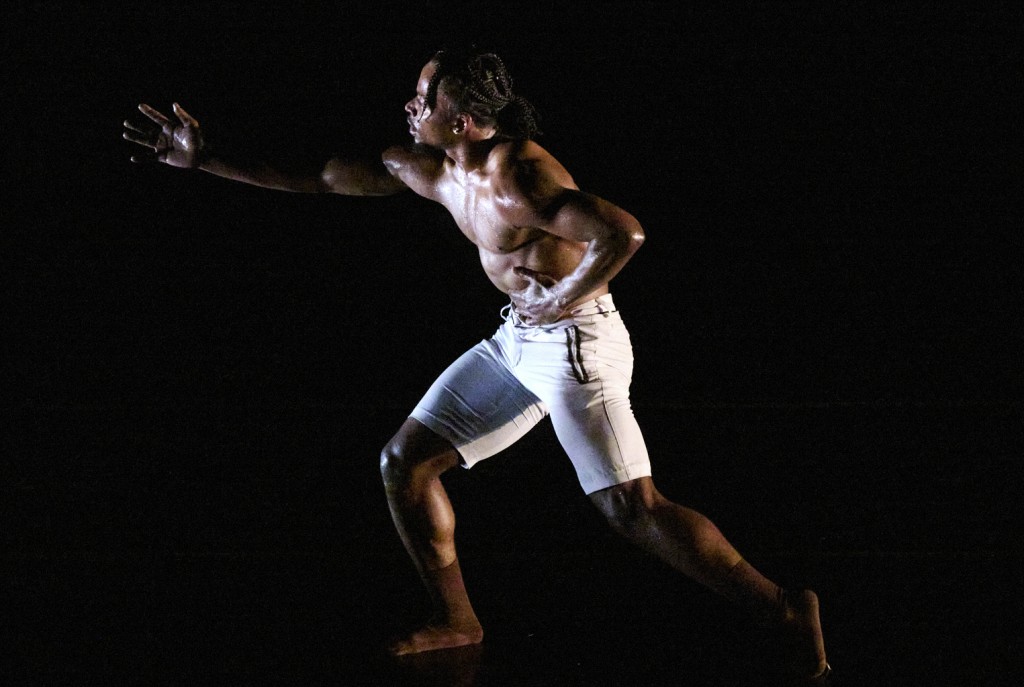 I figured I should put this pic of Ty Morrison right up front, to whet everyone’s appetite. Photo by Rob Latour, as is the one at the top of this article.

As usual, the Wallis was the perfect venue. It’s always the most comfortable theatre; the seats are huge and I never feel like anyone is crowding me, no matter where I sit. And their outdoor patio is a lovely place to mingle before and after the show and during intermissions. (It would be even better if they’d listen to my pleas for the bar to carry snacks again, especially the chocolate chip cookies I told them about!)

This opening night was even more special out there. A DJ was playing great hip-hop music, and at just the right volume for us to enjoy while still socializing. And to celebrate BodyTraffic, the bar was serving complimentary Prosecco. 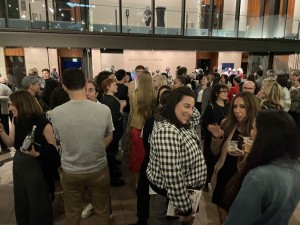 Some of the mingling on the patio bar at intermission. Photo by Karen Salkin.

But my friend Marc and my favorite part of the pre-show festivities was first spotting, and then meeting, Shirley MacLaine! She was really nice, accommodating, and amusing. And willing to chat! When I told her that I had just celebrated the 90th birthday of a mutual movie star pal, she said that the next time I see him, I should tell him she says he’s very brave to have turned ninety!!! (This from an eighty-eight-year-old!) [Note: At the end of this review, I’ll tell you about the one degree of separation I’ve had with Shirley for years until now I finally have none. Complete with the absolute worst picture of me ever!]

As to BodyTraffic, I’ve enjoyed their presentations in the past, and I did so again this time. Perhaps not as much as before, but enough. (And you will not believe which number I loved most, which I’ll reveal in a moment.) Part of my semi-disappoint in this particular presentation is that I was looking forward to seeing my favorite work of theirs, Snap, a very hip number to James Brown music, because it was portended in the Wallis’ private event in May, (which unveiled their upcoming season for the year,) but it turned-out not to be in this program.

But no matter; I was still eager to see the rest of BodyTraffic’s offerings on Friday night. 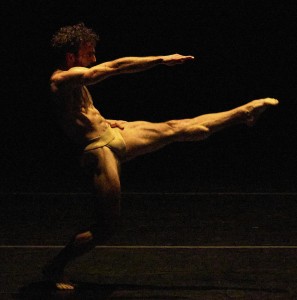 Joan Rodriguez. (In this case, “Joan” is a guy’s name.) Photo by Rob Latour.

So here’s a shock: For those of you dance lovers who were also at the Wallis last week-end–no, Pacopepepluto, the number with a trio of almost-naked specimens of male beauty, (they were rocking just nude dance belts,) was not my favorite! (But I totally admired their spectacular bodies! I had already written the note, “The arms of Ty Morrison–OMG!,” from the opening piece, and that was when he was dressed! But the program erroneously listed a different dancer in this one, which was inexplicably danced to Dean Martin songs.) Too bad the lighting was way too dark for us to fully witness their gorgeous physiques.

Nor was my fave the possibly-happy Peggy-Lee-music-inspired number, A Million Voices, which I’ll get into in a minute.

Ready? It was the West Coast Premiere of The One to Stay With, a very dark and depressing story of…the opioid crisis! It was my favorite not because of the topic, of course, but because it featured the best choreography of the evening. Part of my admiration is due to the many krump moves incorporated into the pain, especially those performed by the exquisite Tiare Keeno. I’m not an expert on martial arts moves, but I believe I saw some of those in there, as well.

Marc had spaced-out during the company founder’s pre-curtain description of the piece, so he didn’t know what it’s supposed to be about, but he got the darkness from the superior choreography by Baye and Asa, whispering, “This is making me think of the Holocaust.” (Less esoteric program notes would have helped, not with just this one, but all of them. Audiences like to know exactly what they’re watching.) 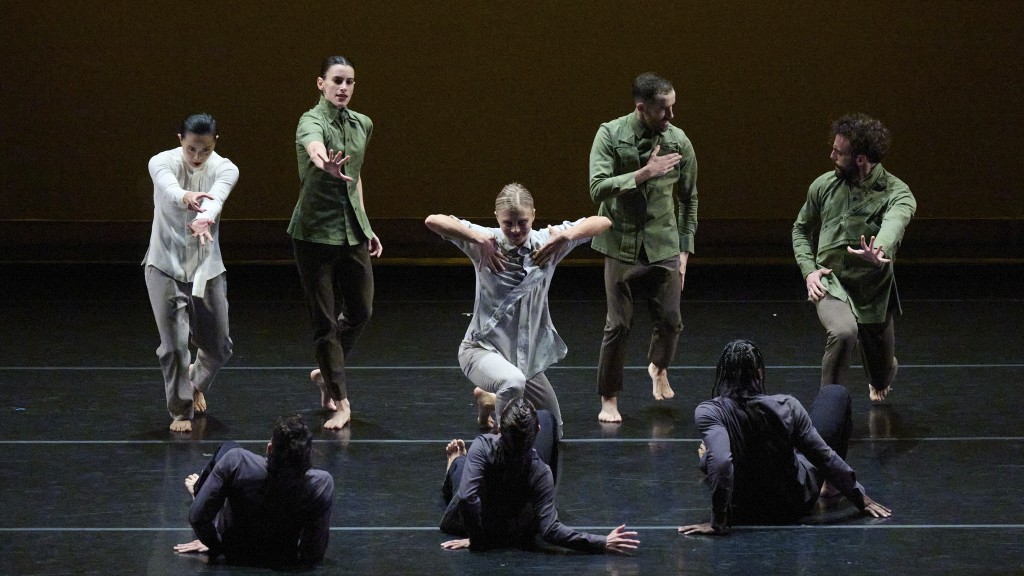 As to A Million Voices, when I saw that it was being performed that night, even knowing I’m a fan of the dancing in it, I didn’t want to see it again because I detest Peggy Lee’s famous song Is That All There Is, which is played in full in the piece. I wondered if I could actually have matured enough in the four years since I first saw this number, to rise above it and just enjoy what I was seeing, not hearing. I assumed not, but guess what? I have! I paid the song no mind whatsoever because the choreography was full of fun and interesting moves. (Or because I was so sleep-deprived from living my glamorous life that I couldn’t even make-out the words.)

I didn’t understand the costumes in the piece, though—there were two beachgoers, a prom dress, and a harlequin or two. And there was a lot of water spilled over some of the dancers. Go figure. (After even more H2O spillage in another number, Mark asked, “What is it with them and all the water?!” I agree—I kept worrying that someone would slip on it. Oh no—I’ve finally turned into my mother!!! ) 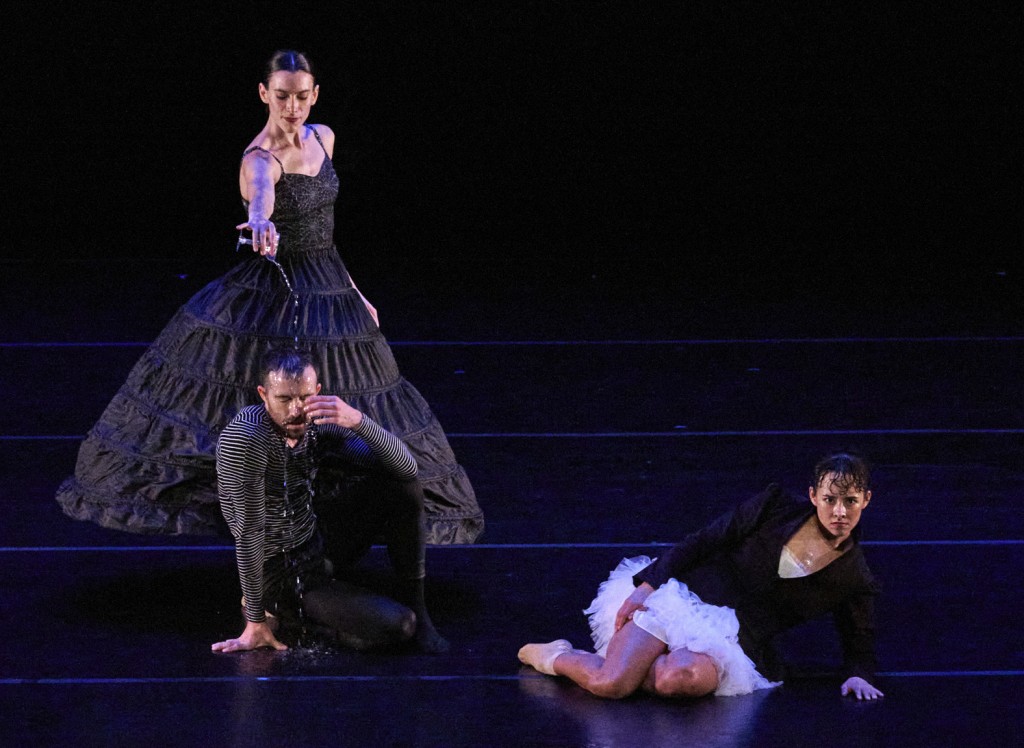 Some of the water-wasting in A Million Voices. (Back to front) Katie Garcia, Guzman Rosado, and Jordyn Santiago. Photo by Rob Latour. The one at the top of this review is of this number, as well.

So now for my least favorite BodyTraffic work this go-round. It was the World Premiere of Love.Lost.Fly. by Michaela Taylor who choreographed the aforementioned Snap a few years ago. So she’s now one and one with me, for those of you keeping score. The difference in the style and happiness of the two pieces is stunning.

I did not get at all what she was going for, including in the costumes, but the dancing was as excellent as usual for this company. Parts of it reminded me of my dance classes when I was a dance major at UCLA. I don’t know if that’s good or bad; I’m just sayin’. 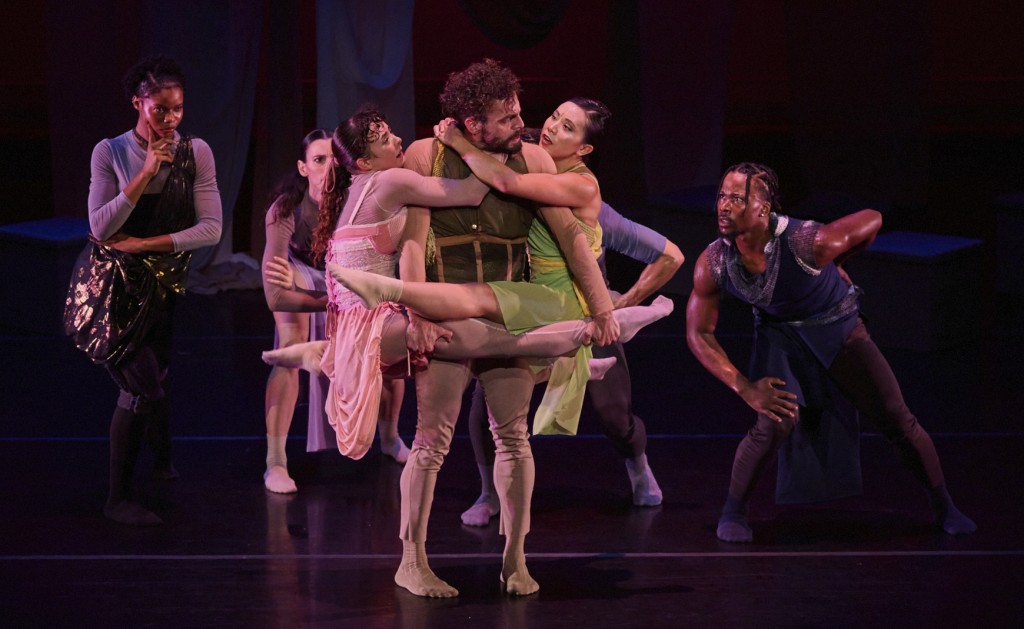 I was actually a bit bored with it all until it finally became clear that the narrative was about a love triangle. (Once again, more detailed program notes would have been uber-helpful.)

Marc kept yawning during it, while I used some of the time to think up my meals for the week. All diet ones, of course, because I was doing it while I was looking at those amazing bodies!

And we both found the music for it to be annoying.

But that one was presented first, and the program picked-up from there. Of course, no audiences can love everything they see, and that I truly enjoyed three out of the four dances, and all of the dancers, made for a truly enjoyable night out.

To keep up with all the shows on the Wallis’ schedule, please check their site, right here: www.thewallis.org. 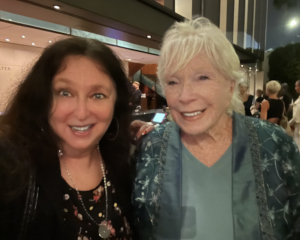 Karen Salkin, (in the worst selfie she’s ever taken,) and Shirley MacLaine! Photo by Karen Salkin.

Okay, so here’s the “my one degree of separation to Shirley MacLaine” saga. When I had been doing my TV show, Karen’s Restaurant Revue, for only about a year, a major Hollywood agent named Mort Viner called to represent me. But at that point, just about everyone in Hollywood had contacted me, and half the time it was just because they wanted to date me or show their friends they knew me, so I was a tad leery of everyone. Mort understood that, and said I should check him out. So, because I was a young idiot, I had my manager at the time call him back. My manager was so afraid that I’d leave him for Mort that he sabotaged the potential relationship. Mort called me again to say that he totally understood, and even made me a professional recording of my recent appearance on The Tonight Show so I’d have it to show others in the business. It was only later that I found out that he was Shirley MacLaine’s agent! Not only hers but just about everybody else’s who was big in show business at the time, as well. He also repped Sammy Davis, with whom I was friendly in the last few years of his life. And one more full-circle part of the tale is that Mort also represented Dean Martin, whose music closed this BodyTraffic show that Shirley and I met at! Now, you’ll have to wait for me to finish writing my book to read the rest of the story.