I hadn’t been in New York City for even twenty-four hours when I was lucky enough to attend this Gala for such a worthwhile cause; its raison d’être is to raise funds and awareness to help animals in need. 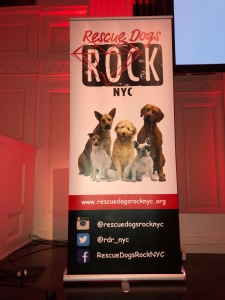 The bigger mission of Rescue Dogs Rock NYC is to rescue homeless dogs, and those already in shelters who are about to be be “put down,” and provide them with immediate emergency care, medical and otherwise. In addition to medical treatments, the animals are rehabilitated by trainers and behavior specialists, which hopefully helps them overcome past traumas.

So, to that end, this event was filled with dog lovers. Some even brought their own canines to it, which I had never seen done anywhere before! Old school actress Sean Young sat right next to me during the cocktail hour, and I didn’t even recognize her because I had eyes for only her pet. 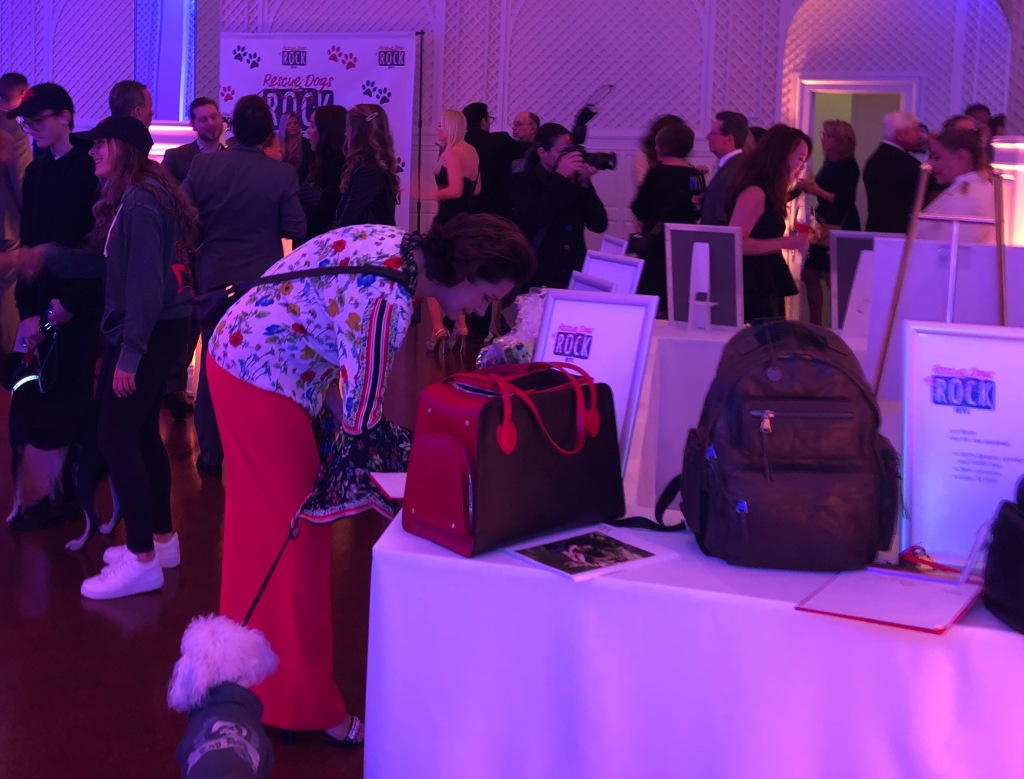 Sean Young bending down by the silent auction, with her canine pal. Photo by Karen Salkin.

Rescue Dogs Rock NYC’s Gala took place at a sort-of mysterious location in NY. I can’t tell you the name of the venue not because it’s super-secret, but because…it doesn’t have one! It’s just an address on Park Avenue. Knowing that story made me enjoy the evening even more. 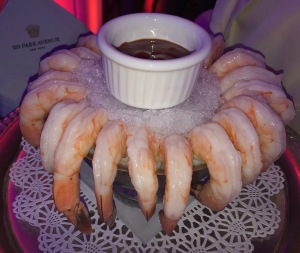 The giant shrimp offering during the cocktail hour. Photo by Karen Salkin.

But I didn’t even need that help because it was all just beautiful. As we entered the lower lounge for the cocktail hour, there was a line of white-jacketed servers offering glasses of bubbly to kick the evening off right. Very classy opening.

The silent auction began there and moved upstairs to the main dining room when the guests did. But before that shift in location, we were treated to one of the best group of hors d’oeuvres I’ve ever encountered! My friend could not get enough of the giant shrimp, peking duck rolls, crab cake bites, and baby lamb chops, while I went with the comfort of mini grilled cheeses, pigs in blankets, and the most delicious egg rolls I’ve ever tasted. 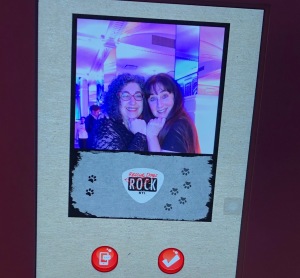 Karen Salkin (on the left) in a photo booth pic, with a friend.

There was an interesting take on a photo booth down there—a guy walked around with a portable one on a stand, so we never had to make the effort to seek it out ourselves! That was fun.

What made it extra-fabulous was the event staff. Each server really served eager to please. Even the Ladies Room attendant, Robin, was a gem!

After just the right amount of time, we moved back upstairs for the dinner reception. The room was stunning, all bathed in red. 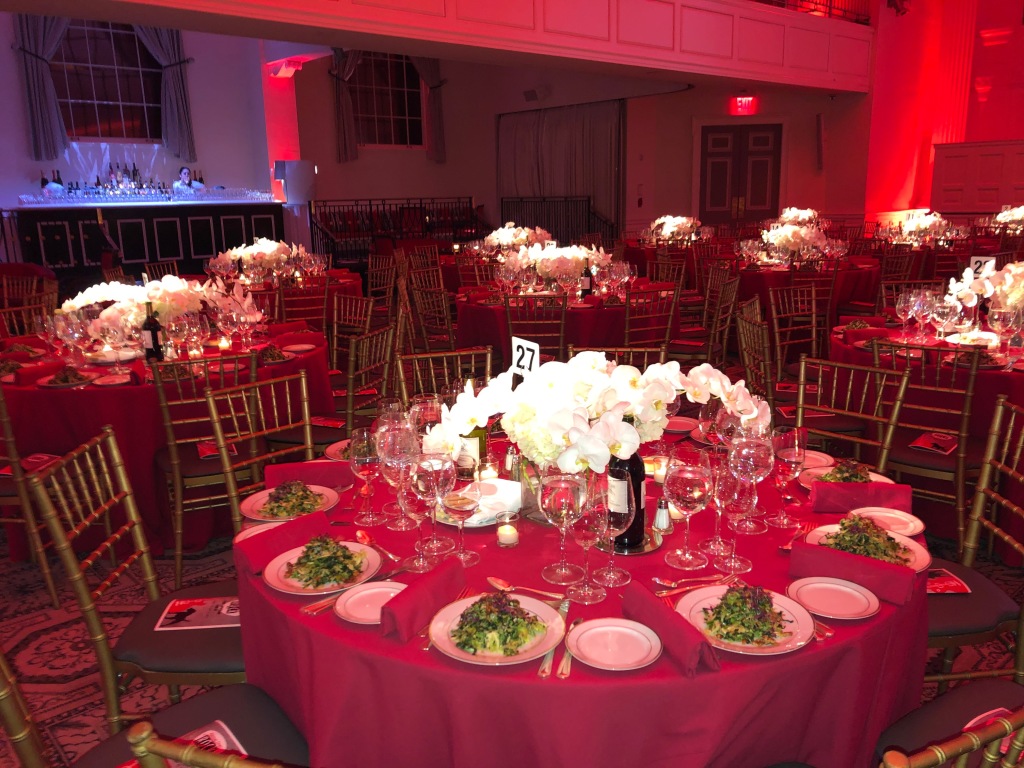 And the food was even better. I have never in my life had a more perfect menu. The Tuscan Kale and Brussel Sprouts Salad alone was too big for an entree, let alone for the first course! Then the Peruvian Chicken a la Brasa was out of this world. But the pièce de résistance was the dessert—Molten Chocolate Cake served with vanilla ice cream and accompanied by a quartet of seasonal berries. And while we were on the sweet treats portion of the evening, a tiered platter of cookies was placed on each table. The whole thing was just yu-um! 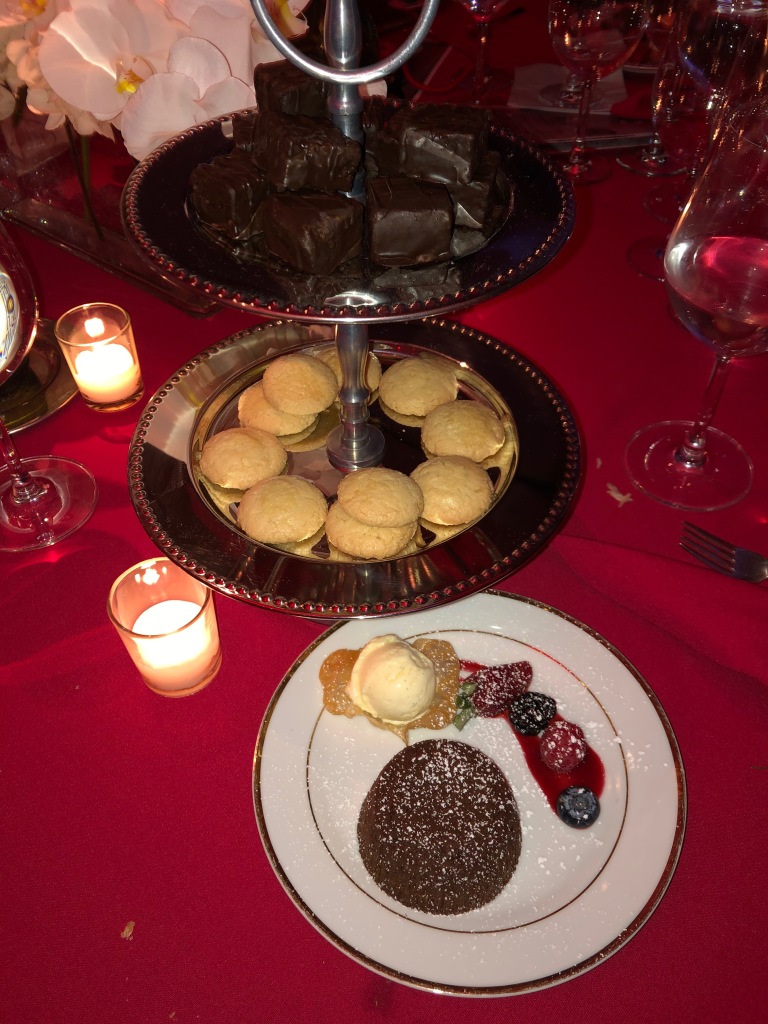 The desserts. Photo by Karen Salkin.

On top of all that, we each received a goodie bag featuring a lovely bottle of wine, in a decorative protective sleeve, on the way out.How generous! 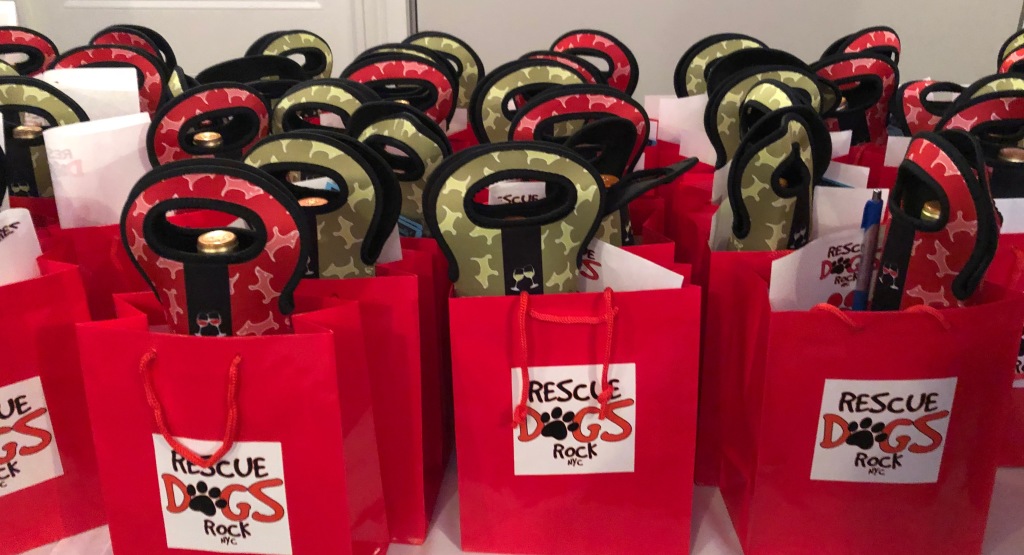 But the real reason everyone was there was to find-out more about Rescue Dogs Rock NYC, and support them. The organization’s co-founders, Jackie O’Sullivan and Stacey Silverstein, (whose Michelle Obama arms I would kill for!,) did the honors of explaining how they started it and how far they’ve come since then. Someone that night said of them, “They move their tails so more dogs can wag theirs.” I love that! 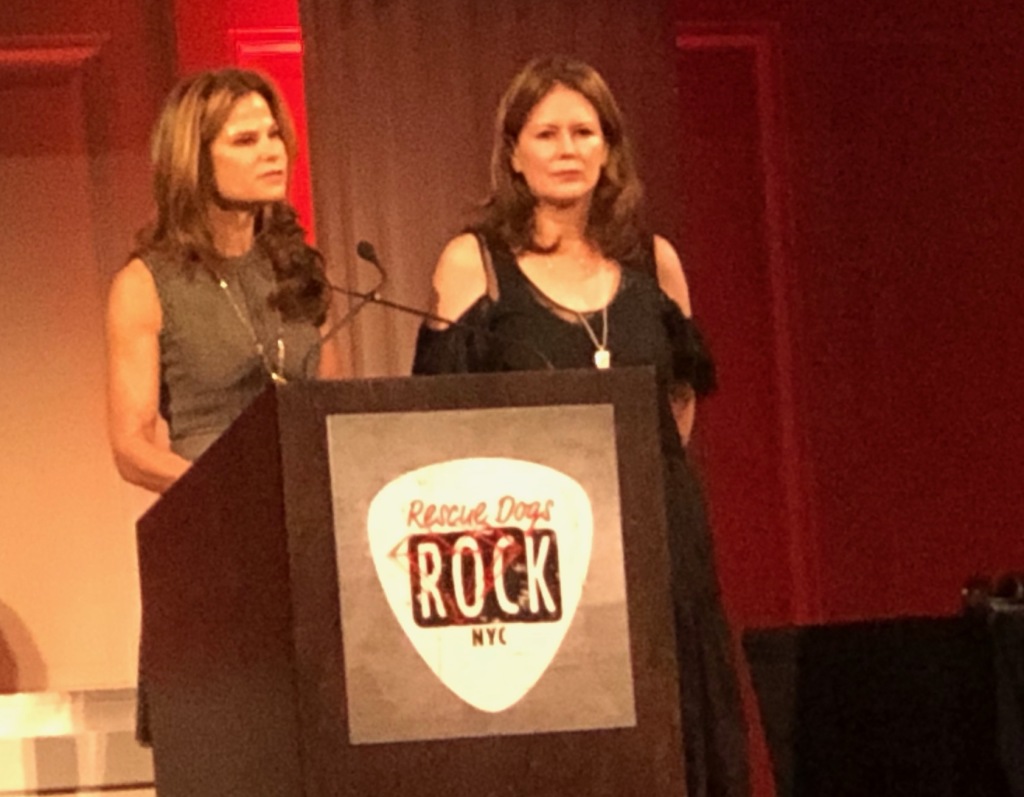 The interesting thing is that I’ve been talking them up since the gala, and about half the people I rapped to about it have told me that their own dogs are rescues! So it appears that this is a movement that New Yorkers will be happy to support.