My co-writer, Laura, and I attended this wonderful and charitable event a few weeks ago, and have been talking about it ever since. 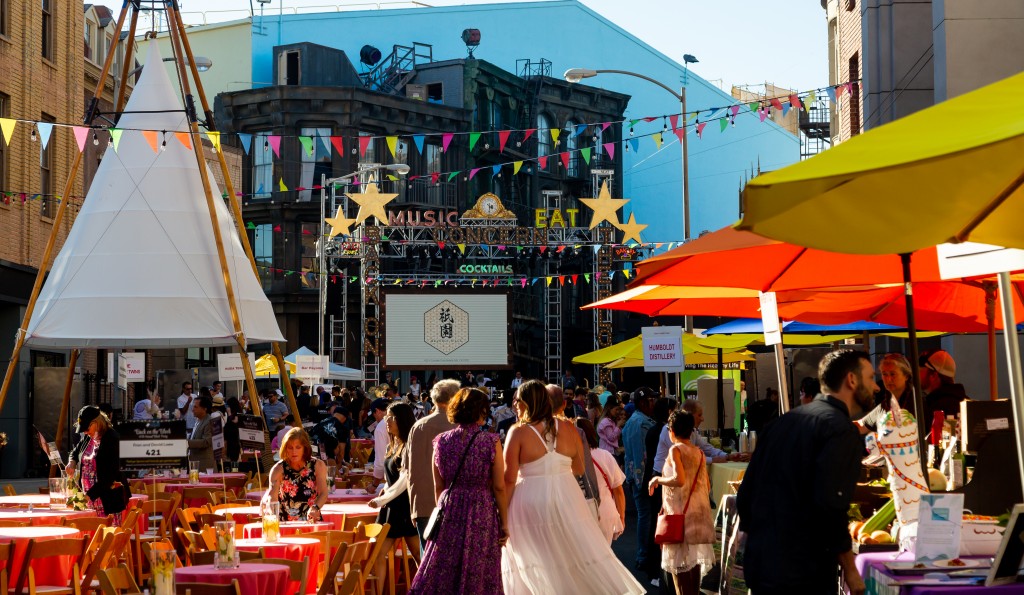 Photo by Chad Villaflores, as is the one at the top of this page.

She had never been to a Concern Foundation Block Party before, but had read my previews and reviews of past ones even before we worked together, and thought it sounded great. (Maybe that’s even why she wanted to help out here on INAM to begin with!!!) And when she read my latest preview last month, she knew that she wanted to be the staff member to accompany me there.

And, within a few minutes of arriving, Laura had already declared it to be the best event she’s ever been to! She tells us, “There was entertainment everywhere you turned. And there were so many food and drink sponsors that we ended up doing a lot of walking. So, in a way, it felt like we were working-off everything we were eating. It made me feel a little less guilty for indulging so much!” 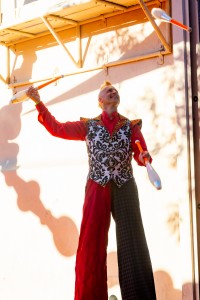 One of the fun performers who entertained all night…on stilts! Photo by Chad Villaflores.

If you’re curious what the party was like this year, you can still read my preview here, because I pretty much did portend everything that happened there: itsnotaboutme.tv/news/upcomingeventcharity-preview-of-the-concern-foundation-2022-block-party.

But the follow-up news is the best: The 2022 Block Party raised well over two million dollars for cancer research! How wonderful is that??? And besides all the fun to be had there, raising that money is the best reason to go to it every year.

The theme this year was Back on the Block, because it, of course, was not able to be held during the two worst years of the pandemic. So we were all happy to be literally back on the block!

And that “block” is Paramount’s super-famous backlot, as always. Even though Laura had grown-up here in LA, she had never been there before, and was astonished. She said, “As someone who has lived in Los Angeles most of my life, I had never gone past the gates of the legendary Paramount Studio. Being able to walk onto the lot where Hollywood history took place (and still does!,) was a magical experience. It made me want to know more about the history of the studio and all of the famous shows and movies that have been filmed there. And this was just the backdrop to what was an incredible event.” 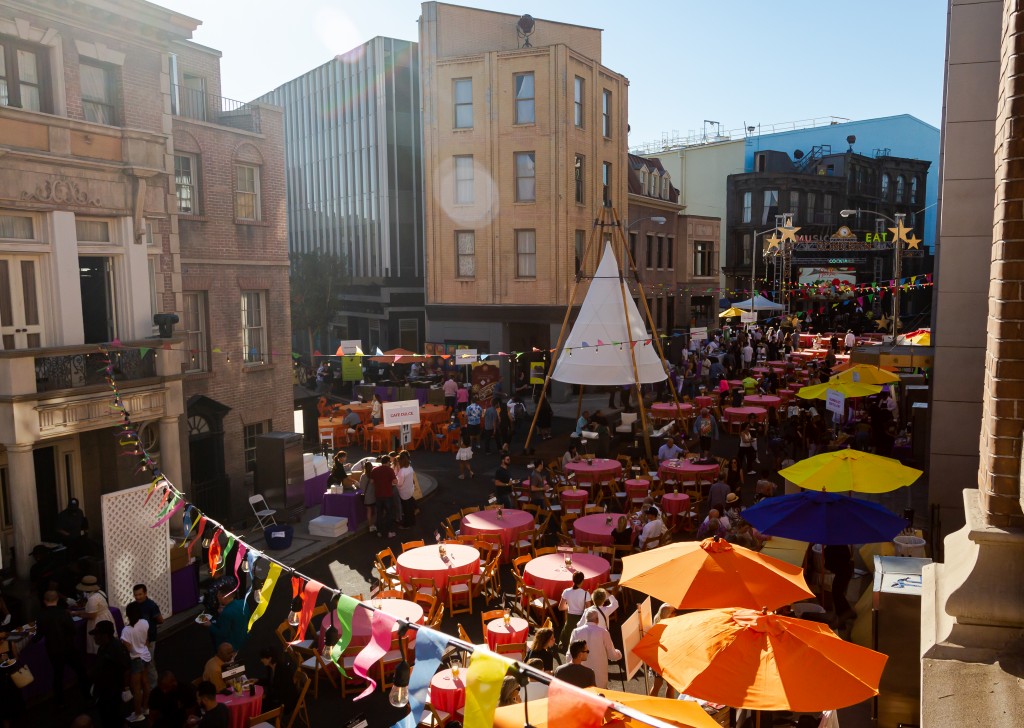 A great view of the Block Party and the Paramount Backlot itself! Photo by Chad Villaflores.

On top of that, we had not been to restaurants for these past two years, so we were happy to see some old favorites there, serving-up their specialties, along with discovering some new ones. (New to us, at least.)

I was thrilled to see my fave Thai place, Emporium, whose dish that night, (vegan and gluten-free curry, which is a three-generational family recipe,) Laura went nuts over. And the pizza from my old pals, Fresh Brothers, hit the spot. My favorite place when red meat was a staple of my diet, Fogo de Chao, was there, as well. (I had only a bite of their chicken this time, but it was quite the treat to even have a taste of their fare!)

The scrumptious mini-burgers from STK. Photo by Chad Villaflores.

I made a red meat exception for the absolute best thing that night, which was gourmet mini-burgers from STK at the W Westwood. OMG! They made me miss red meat all over again.

In the dessert category, Brontë Bakes had the continuous biggest line all night. They let the guests choose several of their famous little cakes at a time, and I have a feeling people even came back for more.

Laura said the whole food section was “like the best all-you-can-eat buffet ever! There was so much to choose from. There were even lots of vegan options,” which I deemed to be really thoughtful.

There were also bands and DJs all over the place, and people were so thrilled to be at this event again that they danced well into the night, just like at a neighborhood block party.

Laura and I were so busy eating, watching the award presentation (which was exactly as I described in my preview, so I hope you read it again,) and meeting and greeting so many old friends who I haven’t seen since B.P. (“before pandemic,”) that we didn’t get to gamble or do some of the other activities on offer. (And all the silent auction items we wanted to bid on had already been grabbed-up by others.) 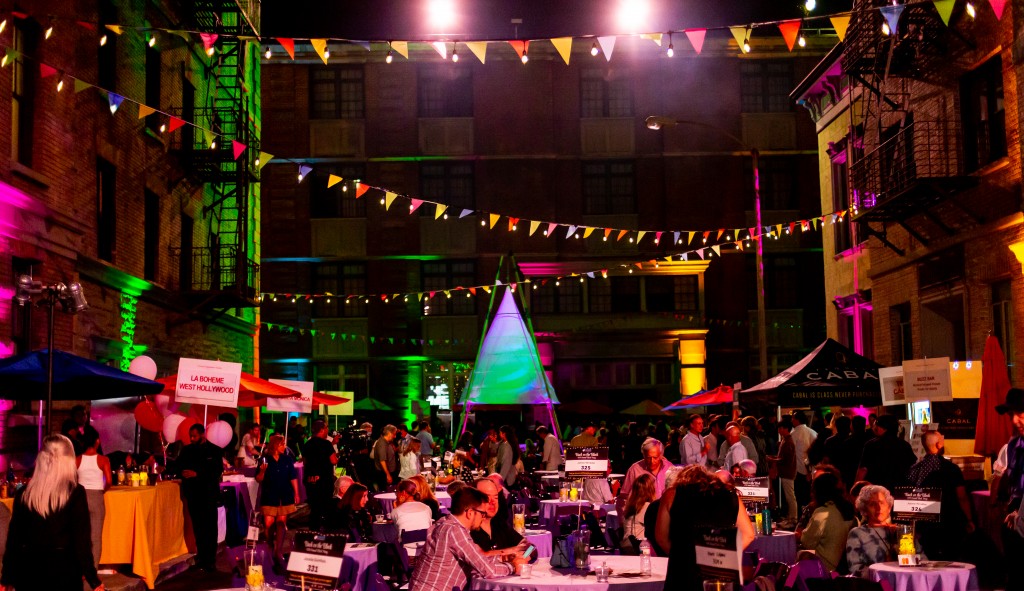 But we had the best time. I also appreciated that there were masks available for anyone who chose to wear one, and little bottles of hand sanitizer all over the place.

I hate using a cliché, but a great time was definitely had by all!

For more information on all the good work done by Concern Foundation, or just to prepare for next year’s Block Party, please visit www.concernfoundation.org.