Trending
You are at:Home»CHARITY»CHARITY/EVENT: AUTISM SPEAKS INTO THE BLUE FASHION GALA
By Karen Salkin on October 27, 2017 · CHARITY, EVENTS

When I was a young elementary school teacher, I noticed that I was usually drawn to my students who were a bit different from the rest. As I learned more, I came to realize that some of them were on what’s referred to nowadays as the “autism spectrum.” So, when I was invited to the Autism Speaks Gala, I accepted with not a moment’s hesitation. There is always new information to help advance autism awareness, which is what this organization is all about, and I wanted to learn. (Plus, let’s face it—I love a good party!) 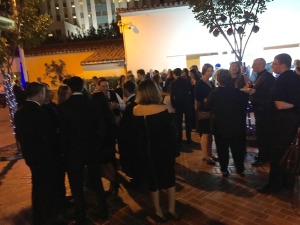 So, last week-end, I headed downtown to the gorgeous Union Station, for Autism Speaks’ glamorous Into The Blue Fashion Gala.  The whole event had the look of a soiree in a movie, especially as I approached it from the valet. I was happy to finally see a crowd in LA who all knew to dress-up for an event! Just about everyone was in cocktail attire and looked fabulous! [Note: But there’s always a slob or two mixed in at these events, which I just don’t get. I can’t imagine what’s in these people’s minds to dress like that, especially if they plan to walk the red, or in this case blue, carpet! Or be on stage, hint, hint, to the man who spoke in…jeans and sneakers!!! I may have to start handing out citations to these people, just so they know how inappropriate they are!] 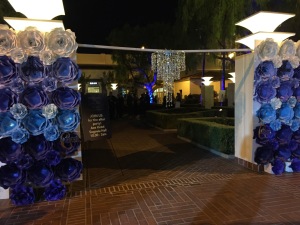 Union Station was an elegant and perfect venue for the festivities. The first part of the evening was an outdoor cocktail reception, which was all lit up, and decorated in blue accents, since that’s the signature color of Autism Speaks.  (Thank goodness it was the night before the current heatwave hit, so we were all very comfortable out there.) The silent auction was set-up out there, as well, and included something for everyone’s tastes, including a visit to the GBK Golden Globes Gifting Suite, which I will be a guest at myself. I’ve written about their previous events many a time, so I can vouch for what a special time the winner of this auction item will have.

There were two bars in the courtyard, and plentiful hors d’oeuvres were passed by amiable servers all night.  The main attraction of the fare seemed to be individual cups of chicken tiki masala on rice, but shockingly for me, I didn’t eat because I was too excited about meeting two of my favorite actors from new television series this season, Freddie Highmore and Brandon Michael Hall. (I’ll get back to the festivities after I sing the praises of these two.) 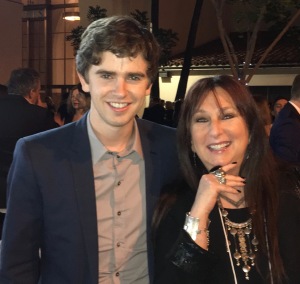 Freddie Highmore is the star of The Good Doctor, on which he plays a doctor who has autism. The entire show was one of the honorees for the evening, being the recipient of the Awareness Award, which that series totally deserves. I’ve never heard more people discussing autism than I have since this show premiered and became an instant hit. So, big kudos to them!

I watched as everyone asked Freddie for pictures, or to do an interview, or just to have a conversation. I really didn’t want to bother him, but once I saw how open and receptive he was to everyone, I worked-up my courage to have a chat.  He seemed relieved when I had different topics from the norm for him, which made me happy. First up, I told him how I love Finding Neverland, the movie that first brought him fame in this country. And when I told him how good he was on a recent Jimmy Kimmel show, we had a laugh over it. I was glad to hear first-hand that Jimmy is as wonderful a talk show host to his guests as he is funny.

I told Freddie that it was so good of him to show up for this event, and he said it was fun for him. He told me that he loved meeting the wives and husbands of the people he works with on the show, so that made the occasion even more interesting for him. I was very happy to see that he’s as lovely as I thought he would be. 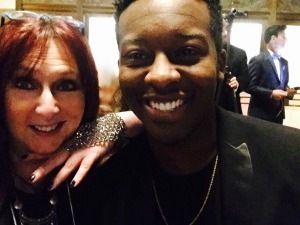 A bit later on, when the assemblage moved into the Grand Ballroom for the fashion show and awards, I noticed Brandon Micheal Hall arrive all by his lonesome, and take a seat towards the back of the room. I just had to go over and tell him how much I love his new sitcom, The Mayor. The strange thing is that, although the show had aired for three weeks at that point, Mr. X and I had just seen the pilot…that afternoon! It was so weird—we had had only twenty minutes to watch one show that day, and out of all the sitcoms that I’ve been stockpiling on my DVR, I chose this one! And…we loved it!!!  So much.  Brandon was happy to hear my whole tale, and asked if I’ll watch the rest of the series. You know I will!!! I can’t even tell you how adorable this guy is! No one but me seemed to know who he is, but he stayed the whole time by himself and appeared to have a good time. And he looked gorgeous, to boot! And was…dressed appropriately! (Hint to all others who show up at classy events in this town.) 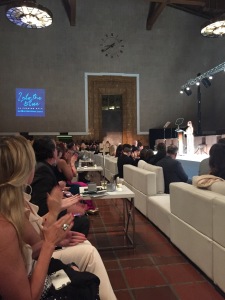 I really congratulate Autism Speaks for attracting such good, fun talent to its gala. (Logan Shroyer, the very handsome kid who plays the teen-age version of Kevin Pearson on This Is Us was also there. What a fun time this night was for a boy-crazy girl such as myself!)

So, getting back to the Gala, after just the right amount of time, we all re-assembled in the Grand Ballroom of the venue, which featured a very attractive raised runway for the Escada fashion show. There were striking black and white couches all along the length of the stage, which all had good sightlines for the show. (I wish all fashion shows would take a tip from them.)  The front row, (which I assume was for the main donors,) even had servers pouring champagne for them all night! The whole event was visually stunning. 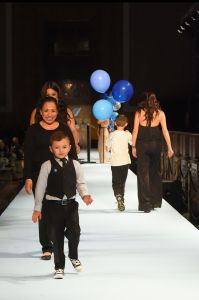 An opera singer opened the program in a classy way, followed by several children from the organization strutting their stuff down the runway, with pride and flair. They were all dressed-up and looked beautiful. That was my favorite part of the program. I could not stop smiling during it.

Before the actual fashion show began, a handful of awards were handed out to deserving individuals and organizations for their good work and dedication to raising autism awareness. Every one of them gave heartfelt speeches, and lauded Autism Speaks. It was heartwarming to see that this organization means so much to so many. 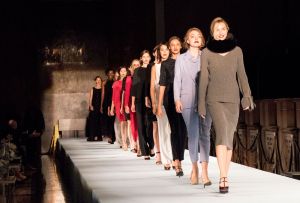 The Escada fashion show followed all that, and was really fun. (For those of you who have been following my fashion sense for all these years, especially since my former TV show, Karen’s Restaurant Revue—yes, Escada attire is a little grown-up and staid for my taste, but I still recognize its elegance and merit. And there was one flaming red dress that I would totally wear, only a million times shorter!) As a former model, I always get nervous seeing others make it down that runway, because I always worried about having a malfunction myself. But this one was all good.

A great time was had by all who attended this Autism Speaks Gala, as witnessed by how upbeat the guests were all evening. But more importantly, vital funds for the cause were raised, as was the awareness of autism for all of us. It was truly a triple-win event!