Trending
You are at:Home»CHARITY»CHARITY/DINING/EVENT: MASTERS OF TASTE 2019
By Karen Salkin on April 12, 2019 · CHARITY, DINING, EVENTS

This was my third year in a row that I attended Masters of Taste, which is a one-afternoon food and beverage event that’s not only fun for the literally thousands of attendees but it’s for a charitable cause! All of the proceeds benefit Union Station Homeless Services, which is a nonprofit organization committed to helping the homeless rebuild their lives.  With more and more encampments popping-up all over Los Angeles, (and I do mean all over—even in neighborhoods where you’d least expect it,) this organization’s services are needed more than ever! 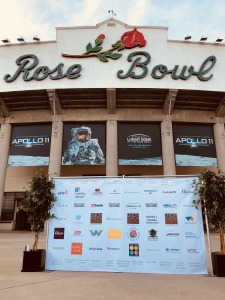 Photo by Karen Salkin, as is the one at the top of the page.

Knowing that we’re helping others is the best part of the day for me. But let’s be honest here—most people are there for the food and booze and meeting and greeting. So let’s discuss what went on there this year.

Masters of Taste is held on the Rose Bowl field! My friend, Roz, has lived in LA her entire life, but had never been on that iconic field before, so that was one of the most exciting aspects of this event for her. And for me, as well, actually–I’ve been on that turf at least ten times in my life, but I was still excited to do so once again. There’s something so thrilling about it! Roz told me, “I liked the fact that we could walk on such hallowed grounds, and imagine all the touchdowns that have played-out there.” 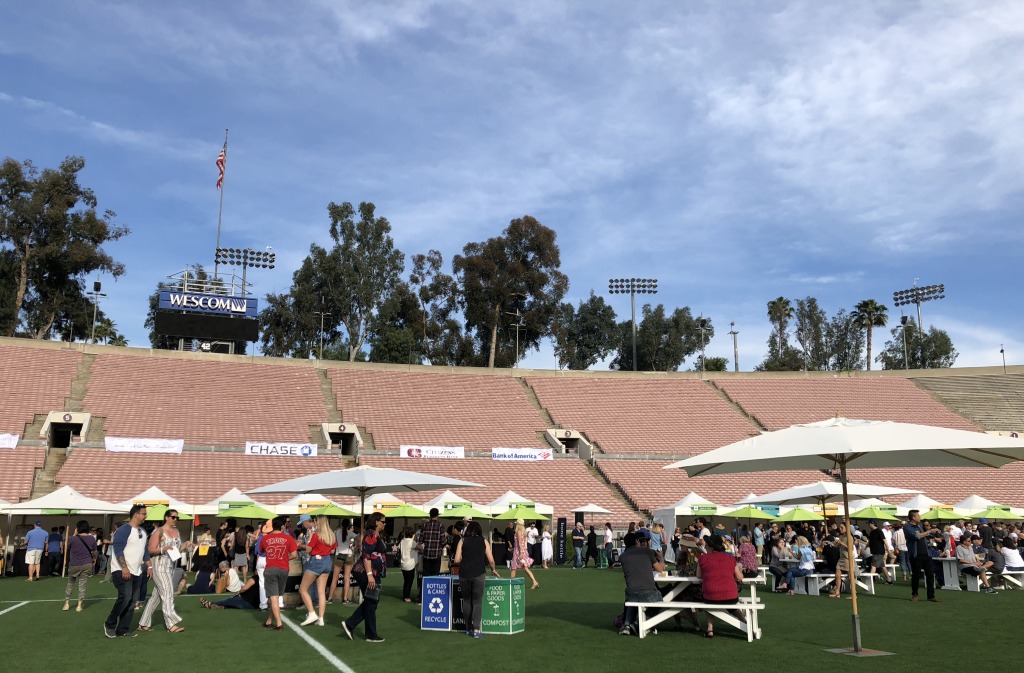 It seemed like they had a few more umbrellas this year, thank goodness, but they neglected to place the picnic tables underneath them. (Don’t worry about me, though—I just took care of one myself!) I have a feeling the reason they moved the event up a month, from the usual May date to this year’s beginning of April, is to avoid the heat, which was very smart of them. But then, of course, this year’s event took place on the hottest day of the year so far. When we arrived, it was 87°! That was just in Pasadena; I have a feeling the temperature was even higher on the field! But nobody besides me seemed to mind very much, so it was all good. Roz even had a different take on the heat situation; she said, “The ambiance was very pleasant, and everyone seemed to be enjoying a warm, sunny day at the Rose Bowl.” Talk about seeing the glass half full!!! 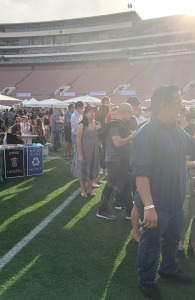 One of the very long lines for food. (Note the smartly-monikered trash bins in the middle of this pic.) Photo by Karen Salkin.

It was gratifying to see that so many people were not penny-wise and pound-foolish when it came to Master of Taste. The lines for the hour-early VIP entrance were super-long, even though those tickets were sixty dollars more. But there are very few vendor lines in that one hour, you have a better chance at getting one of the too-few tables, and most importantly for the imbibing visitors, they get that extra hour of unlimited booze! Best of all, since this event is for a very worthwhile cause, it’s a great use of that little bit of extra money. (Keep all that in mind for next year’s extravaganza!)

As a teetotaler, I was very happy to see that lines were much longer for food than for booze! And that many people were smart enough to not drive there themselves when they knew they were going to drink. Good for all of those responsible drinkers! 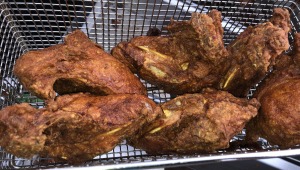 Sadly for Roz and me, even though we were there for a full three hours, we didn’t get to try many dishes because A) we got full pretty quickly, and B) I don’t stand on lines, so once it got crowded, I couldn’t get to many of the vendors.

But I still sampled about twenty-six of the dozens of eats on offer. Roz was happy to discover that there was some fare for vegetarians, and even a few items for vegans, including a plant-based pizza, (which I thought tasted like cardboard. But doesn’t all vegan food do that???) 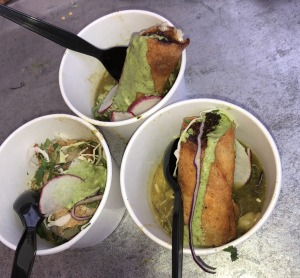 The offerings from Pez Cantina. Photo by Karen Salkin.

The most popular booth, by far, was Gus’ Fried Chicken. People waited for the unbelievably spicy succulent breasts for about a half hour!!! Not only were they delicious, but they were eye-popping visuals! And the guys at the booth could not have been nicer.

My personal favorite was Pez Cantina. They served two foods I absolutely love, in general, but their renditions were especially delish. One was posole verde, which is sort-of a Mexican version of chicken soup, and the other was a potato and broccoli taquito. I could have eaten just several servings of those two all day and been very happy. 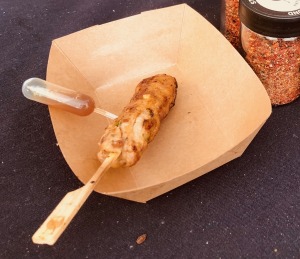 The chicken “meatball” from Hatch. Photo by Karen Salkin.

My next fave place was Hatch, which was serving two takes on chicken. (Are we getting a clue here that I love chicken?) One was called a chicken meatball, but it looked more like a sausage. It came with a little pouch of a sauce attached; you took it out and squirted it on the “meatball.” The other was a triangle of black fried chicken that was so much more delicious than it looked!

The two best visuals were these: an Italian restaurant dished pasta out of a giant hollowed-out Parmesan block, and another place created ice cream and sorbet right in front of our eyes, using Nitro ice.

Speaking of visuals, I so appreciate that they made the tables pretty, with flowers in vases and arrangements of little oranges on greenery all around them.

And I applaud the Masters of Taste organizers for providing excellently-marked garbage receptacles, for three different situations—compost, recycling, and good old plain trash. I just hope that everyone respected the differences as much as I did!

I was thrilled to see that there was a lot of water on site. A lot of bottles of water. That’s what I had the most of on that hot day. It’s also the most important thing in life, which more people need to realize. 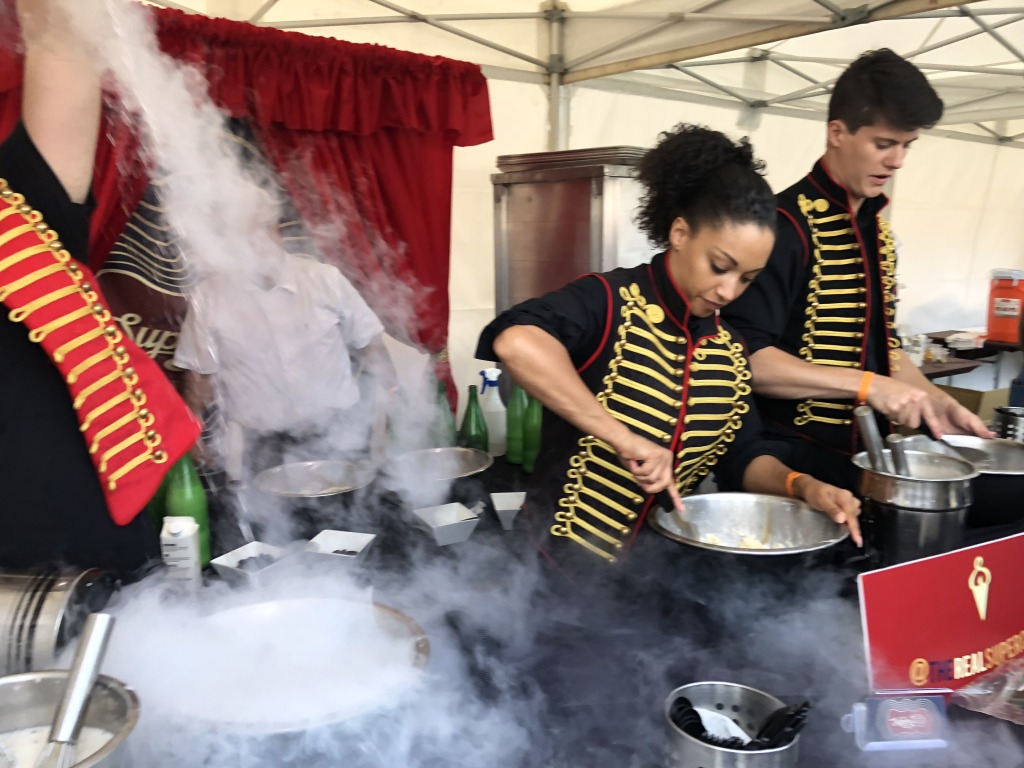 The Nitro ice cream and sorbet being made. Photo by Karen Salkin.

I must commend the staff and team of volunteers for being so pleasant and eager to help. All the ones I ran into were helpful, with smiles, to boot!

I was so happy to meet many of you INAM readers there. Thanks for coming up and saying hi, even though I may not have looked like myself with my hair completely back, and rocking my cooling towel! (But I was also rocking a cupcake necklace and earrings, which I searched long and hard for, so I’m happy that you got to see those little trinkets.)

Let’s all do it again at next year’s Masters of Taste! I’m dieting until then!