September is always one of the juiciest months for sighting celebrities in Los Angeles, mainly because of Emmys week, and this year followed suit. Here are some of the highlights from those events, as well as some other fun ones that I’ve reviewed recently. 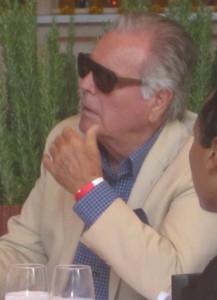 9/12/13 The still-gorgeous Robert Wagner, and his daughter Katie, at Doris Bergman’s fabulous pre- Emmys party at Fig and Olive in West Hollywood. (If you missed my review of it, you can read it here: itsnotaboutme.tv/news/gifting-suite-doris-bergmans-style-lounge-party-in-celebration-of-emmy-season.) He and I had been mutual fans of each other back in the day, (as a matter of fact, he’s one of the people who told me not to have a nose job when I was starting out,) and Katie Wagner and I had done a pilot for some weird shopping show about a decade ago, so I know I should’ve gone over to chat with them. It was my first day out in the month since my first hand surgery, so I wasn’t quite myself yet. But it was fun to just look at RJ’s beautiful face.

9/14/13 Michael Madsen, fresh from his most recent legal skirmish, at the better-than-ever Secret Room gifting suite at the Century Plaza Hotel. (If you missed my review of the event, you can read it here: itsnotaboutme.tv/news/gifting-suites-secret-room-red-carpet-style-lounge-honoring-the-emmy-awards.) I really don’t know that much about him, in general, but it was fun to see the different people’s reactions to him. A couple of people told me they were really excited to see him, while a couple of others told me that he was dirty and out of it. Charming.

9/16/13 Jerry Mathers, a.k.a. The Beaver, at the Wow Creations gifting suite held at Luxe Hotel in Beverly Hills. (If you missed my review of the event, you can read it here: itsnotaboutme.tv/news/gifting-suites-wow-creations-lifestyle-gifting-suite-in-celebration-of-the-65th-emmy-awards.) An older man was waiting to go down in the elevator with me, and all of a sudden, some young girls rushed up to him, begging for a photo. I had no idea who he was, but that happens often for me at these Hollywood events, so I didn’t really pay attention to what was going on. But when he turned around to look at me, to see what was happening with the elevator, I realized that I had come face-to-face with Leave it to Beaver himself! That was kind-of fun.

9/18/13 The Glee cast was out in force for opening night of The Wizard of Oz at Hollywood’s Pantages Theatre. I sat next to the best of them, Lauren Potter who plays Becky, but we also spied Josh Sussman and Patrick Gallagher, who played Jacob Ben Israel and Ken Tanaka, respectively, during the first couple of seasons of the hit television show.

9/21/13 Perennial So You Think You Can Dance judge Mary Murphy, at the GBK gifting suite to honor the Emmys. (If you missed my review of it, you can read it here: itsnotaboutme.tv/news/gifting-suites-gbk-emmys-gift-lounge-2013.) I had actually met her the week before, but very briefly, so we finally got to chat for a minute at this event at the W Hollywood. I’m so jealous of how thin she is now, (in a good way,) and she confided the name of her fabulous diet to me. I just hope I can remember it when I’m done with all my surgeries and can finally get back to being me! I can’t believe that Mary Murphy is now my diet guru! Who woulda thunk it?

9/22/13 Music business songwriting royalty, Mike Stoller, who, along with his late partner Jerry Leiber, wrote oh so many mega-hits of the 50s and 60s, at the opening of Smokey Joe’s Café, the musical revue that contained thirty-nine of those songs, at the Pasadena Playhouse. (If you missed my review of it, you can read it here: itsnotaboutme.tv/news/theatre-smokey-joes-cafe)

9/29/13 Oscar winners Tom Hanks and Octavia Spencer at the first pre-release Los Angeles screening of Captain Phillips, although they were far from together. (But that’s how Hollywood reporter types always make things sound, so I figured I’d try out this show business deception prototype myself.) Tom, the star of the film, appeared at the post-screening Q-and-A, while Octavia joined me as part of the SAG nominating committee audience!