This may just be the most eclectic group of famous people I’ve ever published! I obviously haven’t been my normal social butterfly self this summer, because of the issues I’ve been going through with my poor painful hands, so it’s a miracle I’ve seen anyone in town at all, let alone celebrities! I hope you get a kick out of at least one of these people. 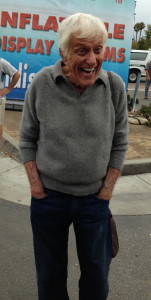 7/28/13 Dick Van Dyke at the Malibu Art Festival. (This was about a month before his miraculous escape from his burning car.) Mr. X and I actually witnessed him standing there being charming to every single fan who came over and asked for a picture or an autograph. Every a-hole pseudo-celebrity in town should take a lesson from this icon! He was there to support his grandson who was showcasing his artwork, and I have a feeling that Dick’s presence brought a lot of buyers to this young man’s booth. Mr. Van Dyke’s kindness to all was an art unto itself.

The cast of Austenland doing a post-industry screening Q-and-A session. The first three on the left, after the moderator, are Keri Russell, Bret McKenzie, and Jane Seymour. Jennifer Coolidge is at the very right. Photo by Karen Salkin.

8/9/13 Keri Russell, Jane Seymour, Jennifer Coolidge, and Bret McKenzie doing a post-screening Q&A for their fabulous new film Austenland at a private screening room in West Hollywood. [If you missed it, you can read my review of the film here: itsnotaboutme.tv/news/movie-review-austenland.] Bret (who’s half of the hilarious comedy duo Flight of the Concordes,) and Jennifer were riots, and Keri seemed like a nice girl who was just happy to listen to their funny stories. And, even though I have personal stories of how absolutely un-charming Jane is in real life, (to me, anyway,) I must admit that she looked really great for a woman in her 60s! At least you know I give credit where it’s due. 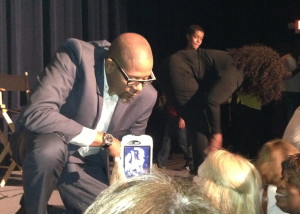 Forest Whitaker and Oprah Winfrey leaning down to talk to SAG members after their post-screening Q-and-A session. Photo by Karen Salkin.

8/12/13 Forrest Whitaker, Cuba Gooding, Jr., and Oprah Winfrey doing the post-show Q&A after the first industry screening for their soon-to-be hit The Butler, in West Hollywood. [You can read my review of it here: itsnotaboutme.tv/news/movie-review-the-butler.] As I’m sure many of you know, I’ve never been a fan of Oprah, but I was shocked to see her letting everyone on the panel talk, and not trying to take it over herself, as is her wont. And my friend commented on how nervous she seemed to be about the success of this movie. She just kept begging the audience to tell their friends to go see it, which I was kind of shocked to witness, especially becauseI think it’s the Number One movie on everyone’s to-see list. And to the credit of the assemblage, no one asked her about the supposed racist incident in Switzerland, where she said a shopgirl wouldn’t show her an uber-expensive purse because the women didn’t think she could afford it. I personally don’t know why someone who professes to care so much about mankind would spend fifty thousand dollars on a purse to begin with, but I, too, bit my tongue from asking her about it. [But, if you missed it, you can read my rant on that situation here: itsnotaboutme.tv/news/karens-rants-latest-oprah-controversy.)

8/15/13 Fellow Brooklynite, and ’80s actor, Scott Columby, of Caddyshack and Porky’s fame, in, of all places, my hand therapy place! I overheard him inviting someone to his music gig for that week-end, so I did some digging, and found out that he’s now a drummer. Being a percussionist with a hand problem may actually be worse than me being a writer with hand problems! At least I can now use a dictation program; I don’t think that would really work for a musician.

8/22/13 This one cracks me up. On the way home from getting my surgery bandage changed on my hand, Mr. X pointed-out a woman driving an old-school Rolls-Royce because he said something about her reminded him of my mother. He said he was sure I wouldn’t agree, so, of course, I had to look. I laughed so hard when it turned out to be an old pal of mine, songwriter Carol Connors, who was the girl singing the ’50s classic To Know Him Is To Love Him, with the group The Teddy Bears. She and I had done a lot of celebrity charity appearances together when I was first starting-out, and we had a lot of fun back then. I hadn’t seen her in a really long time, and she definitely looks nothing like my mother at all, but with the fun sunglasses and bright lipstick, I could see what Mr. X meant. So the visual gave me two good blasts from the past!