Even though L.A is the best place on earth for sighting celebrities on a regular basis, New York can hang in there for a solid second place.

Here are the highlights of the ones I spotted while in the Big Apple for the past month and a half: 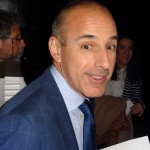 Was Matt Lauer surprised to see us?! All photos by Lauren Clarke-Bennett.

4/16/13 There was an eclectic mix of celebs at the Garden of Dreams event at Radio City Music Hall: Matt Lauer, New York Giant Victor Cruz, Darryl McDaniels of Run DMC, (remember them?), and Savion Glover, who looks the same as when I met him more than a dozen years ago! Wish I could say the same for me. 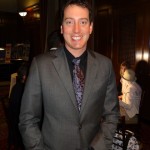 4/22/13 Here’s a celeb duo for you: Richard Thomas, (of The Waltons fame,) and NASCAR driver Kyle Busch! What do they have in common, you may ask? (And no—only one of them blew his engine at this past week-end’s Coca-Cola 600 race!) They’re two of the really good guys who showed up at the New York Athletic Club to laud the National Meningitis Association. You really should look into this worthy charity. (You can read more about the whole event here: www.itsnotaboutme.tv/news/2013/05/03/new-yorkevent-give-kids-a-shot-national-meningitis-association-gala)

4/24/13 New York City Mayor Bloomberg, speaking at yet another worthwhile charity event, the JBFCS Spring Benefit, held at the venerable Plaza Hotel. (If you missed my write-up, you can read it here: www.itsnotaboutme.tv/news/2013/05/06/new-yorkevent-jbfcs-spring-benefit.) I was surprisingly glad to have seen him in person, for the first time ever! 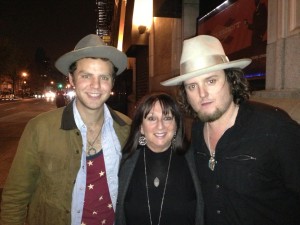 4/24/13 Up-and-coming music group, Sons of Fathers, at the actual NYC apartment where I was staying! That was a fun surprise. Bassist David Beck looked at videos with my friend, Lauren, while guitarist Paul Cauthen and I compared fabulous jewelry! How fun! And when Lauren and I entered the Lower East Side’s Mercury Lounge to see them later that night, I loved being able to state, honestly, “We’re with the band!!!”

4/25/13 Jim Parsons, star of The Big Bang Theory (for the one person out there who didn’t already know that,) onstage at a SAG Foundation “Conversations with…” event at the Baruch Center. He’s much better-looking in person, (actually bordering on handsome…I’m not kidding!,) and very thoughtful. And he sure knows his business of acting! When someone asked him what he does when he has to work with a bad actor, I froze for a second, but then remembered I had never done a show with him, so no tales for him to tell there.

5/7/13 Irish actor, Chris O’Dowd, of Bridesmaids fame, walking past us in Times Square. My pal, Noelle Hannibal, (who was in town from Montreal just for the day to sing on the Pippin cast album!,) is the one who noticed him. Next time, he‘ll be the one pointing her out to his friend! Knock on wood. 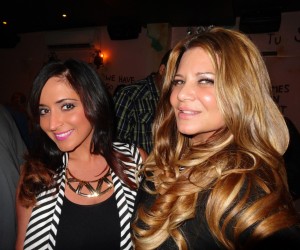 5/8/13 I have no idea who these people are, but I understand that people who watch “reality” TV do, so here goes. Angelina Pivarnick from Jersey Shore whopping it up at Mob Wives‘ Karen Gravano‘s (love her first name!,) birthday party at Village eatery and club, Sazon. I’ve never seen so many big butts in my life! When I showed the pix I snapped to gal pals of mine in Rhode Island, they pointed out which ones were fake! (And no, they weren’t on these two ladies.) I’m amazed that I, who lives in the plastic surgery capital of the world, had no idea such things existed!!! You go, girls! And, just where do I get one??? Pronto!

5/22/13 This one was the perfect celeb to bridge my time between New York and Los Angeles: powerhouse attorney, Gloria Allred, was on my flight back to LA. The weird thing is that she was originally sitting in coach, while little old me was in Business! She quietly said a few words to one of the stewardesses, and was instantly moved up to Business, as well. I’m dying to know what those short, powerful words were. Maybe they were, “I’m with Karen.” Do ya think?!

Now that I’m safely ensconced back in LA, the next Celeb Sightings column should be even more juicy, if not as diverse.