This book launch soiree was so well-done that this Beverly Hills periodontist’s next tome should be an event planning one! I was uber-impressed with it all. It was fun, easy, informative, delicious, and attractively-festooned (which is also a word in dentistry, so see what I did there?) Just the way I like all fetes to be. 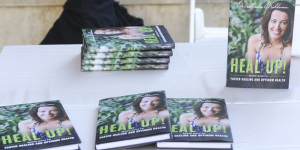 The occasion was to introduce us to the book Heal Up, written by Dr. Sanda Moldovan. It explains ways to heal your own body using resources from nature. Easy enough, right? But do many of us really know how to do this? I would guess not.

Digression: About three years ago, because of my back issues, I went to a body healer a couple of times. He was great, but his technique required a lot of physical pain, so I was not a big fan. But he did help me greatly in our initial session—as soon as he was done working on me, the very first thing he told me is that I’m constantly “wearing a backpack…of other people’s problems!!!” Exactly. 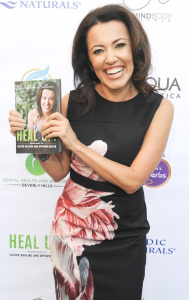 So, since I obviously cannot heal myself, I was very interested to read what Dr. Moldovan had to say. And let me tell you, this woman has a lot of useful information! Maybe if I start following her advice, I’ll get back to being as thin as she is!

There’s actually one tip in the book that I’ve already done since I was a teen—I walk barefoot all the time. Who knew that my dislike of having my feet confined meant that I was doing something good for myself? Maybe that’s actually why, despite all my maladies, I’m still doing so well!

This party was the perfect way to demonstrate some of her principles from the book. There were so many different “stations” with something beneficial happening at each one! 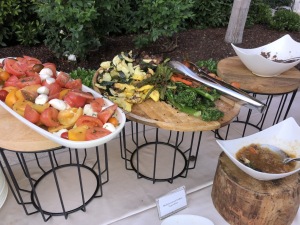 In the food category, (which is always my main concern, of course,) the amiable staff* passed healthful appetizers until the bitter end, which was an unbelievably generous thing to do! And there was also a Mediterranean buffet, which included hummus, grilled veggies, caprese salad, and the most delicious fig compote ever! Continuing the theme of healthful foods, even the desserts, as sumptuous as they were, were not bad for us. They each had signs of what was used to make them in place of sugar. 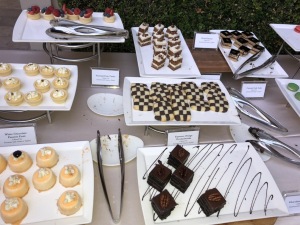 *As to the servers, I absolutely adored Malaya, who could not have been more pleasant and helpful. And she has gorgeous skin, to boot, so she fit right in with the theme of the event! And Edgar said the funniest thing. It may be hard to grasp the mirth in print, (as opposed to me telling it verbally,) but this is what happened: At the end, the only desserts left were ones I don’t eat, except for a drop—and I do mean a drop—of mushed-up pumpkin mousse that had fallen on the cookie platter. Edgar was about to clear it away, but I stopped him, explaining that I really wanted that tiny bite. As I took it, he wished me a serious, upbeat, “Enjoy!” I laughed so hard I could barely swallow that minuscule iota! 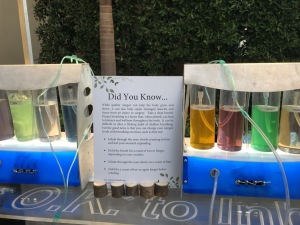 There were two bottled water stations, featuring different brands, (which I think was for some PH situation,) an elixir bar, and my fave—an oxygen bar! (If you’ve never seen one of those, you attach a breathing tube to your nostrils, and choose which oxygen fragrance, or raison d’etre, you want to slowly inhale.) Even the stunning flower arrangements on each table featured cards with useful health info on them.

Making it all even more special, (to shallow guests such as myself,) is that it took place on the massive Terrace of the beautiful Montage Hotel in Beverly Hills, which was a wonderful setting for it. It’s gorgeous up there, and the weather really cooperated that day. (The organizers were lucky, too—L.A.’s high winds kicked-in the very next day!) 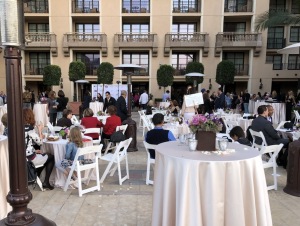 When I noticed that we were receiving goodie bags on the way out, I was so excited, because you know that even after all these years (and roomfuls) of swag, I still love that stuff! And when I took a quick peek in one, I was positively giddy thinking it contained my thousandth lipstick and millionth face cream! But when I got home and went through it, I chuckled because inside were actually all healthful items, which are so much more useful than what I had imagined to be in there! There was a charcoal-bristled toothbrush, a snack pack of dried goji berries, anti-pain cream, and several vitamin samples. It’s all much appreciated.

As are the efforts of Sanda to bring us this lovely reception, and much more importantly, her helpful, healthful, healing Heal Up!