The Mayweather-Pacquiao fight won’t have as much brutality as I witnessed on Sunday in Game 4 of the first round play-off series between The Cleveland Cavaliers and Boston Celtics! (I had to compose my thoughts on it for a couple of days, so that my cooler head would prevail. I absolutely abhor aberrant behavior like this, and didn’t want to lose my top in writing. Plus, new info, and stupidity, keeps coming out each day!)

This game had three of the scummiest moves I’ve ever seen in sports! (I began writing this when it was just one! I never saw the other two coming.)

And, as much as every analyst admitted how terrible these actions were, only Charles Barkley really told it as it was. He said that at least one of the perpetrators should be suspended for ten games. I say—ban the two Cavs for life! (More on the actual punishments in a minute.) One did the worst thing I’ve ever seen, and the other was almost equally evil. And that second dude, JR Smith, had done it before! Enough already!

So, here’s what happened, in order: 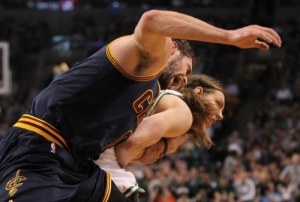 Kevin Love, screaming out in pain.

Near the top of the game, Celtic Kelly Olynyk’s arm was entangled with Cavalier Kevin Love’s left arm. Neither had the ball, and that should have been it for that play. But, as they ran up the court to the other basket, Kelly pulled hard on Kevin’s arm, dislocating his shoulder. It was ugly. (And now, Kevin is out for the rest of the play-offs! I hope it doesn’t effect his playing career after that.)

Kevin later said, “”I thought it was a bush-league play,” and “I have no doubt in my mind that he did it on purpose.”

And teammate LeBron James said, “I’ve seen a lot of tie-ups in my day, and that tie-up was a little different.” 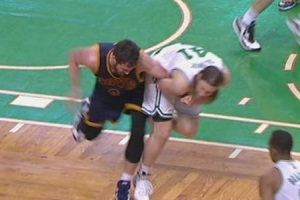 It was a little different, and a bit of a douchebag move, but I couldn’t believe what I was hearing. I really don’t think that Olynyk, who’s considered one of the most mild-mannered guys in the NBA, tried to pull Love’s shoulder out of the socket on purpose. He definitely pulled down on the arm in a hard way, and I hated seeing it, but it looked like it was just a hard, intense basketball play, but with no rotten intent, as the Cavs had towards the Celtics later on in the game.

Mike Tirico and Hubie Brown kept making like it was totally accidental, though. On the next telecast, Jeff Van Gundy said he doesn’t agree with Love. I want to know how they did not see it what really happened! I’m sure he wasn’t trying to dislocate his arm, but he was pulling on it on purpose.

And it got so much worse from there. So much!!! 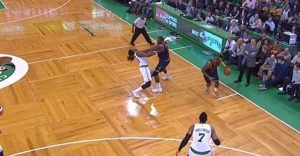 Kendrick Perkins, in blue, choking Jae Crowder, in white, and throwing him to the Celtics’ famous parquet floor.

A little while later, for no apparent reason, the thug of all basketball thugs, Cavalier Kendrick Perkins, went over to block Celtic defender, Jae Crowder, and as he walked over to him, Perkins put both hands around Crowder’s neck, and threw him to the floor! I still can’t believe that none of the commentators and analysts made as much of a fuss about this as they should have. They all admitted that it was disgraceful, but not one of the at least a dozen men I’ve heard discussing it since the incident has mentioned that Perkins grabbed Crowder by the neck! And for no reason! The pair were nowhere near the basket, and Crowder didn’t have the ball. There’s no explanation that Kendrick could possibly have for what he did! 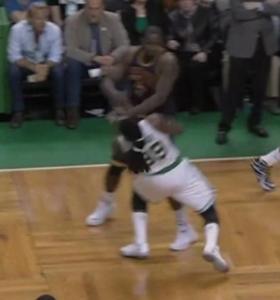 Another angle of the Kendrick Perkins thuggery.

And as Jae tried to get up from the floor, Perkins walked back over to him with clenched fists! Who knows what would’ve happened if other players and officials hadn’t intervened. Even with them holding Perkins back, he reached around them and smacked Crowder in the face! I’ve been seriously watching basketball since I was a little girl, and I’ve never ever seen anything like this before. Thank God!

As shocked as I am over what Perkins did, I’m even more surprised that no one in Boston beat him up after the game! As against violence as I am, I was actually sort-of hoping that someone would.

And then it got even worse for Jae Crowder. In a later play under the basket, repeat offender, Cavalier J.R. Smith, reached back with a clenched fist and punched Crowder in the face so hard that he actually went down like a boxer in the ring! And in doing so, he really messed-up the ACL in his knee, pretty badly. That was the Celtics last game this season, so the injury won’t affect his current playing time, but I’m hoping his knee won’t be a recurring problem for him for the rest of his career.

I actually felt a little bad for LeBron James and the normal Cavs, who were just trying to look away during both of those instances of violence by their teammates. When LeBron was talking about Kevin Love’s dislocated shoulder incident in the post-game press conference, (the comments I mentioned earlier,) I got confused at first, (only because I had just watched over twelve hours of the sport in a row!,) and erroneously thought he was admitting what his own guys did!!! I know you have to stick with your teammates, but I was a little disappointed in him for not distancing himself from such disgusting behavior.

All this violence against Jae Crowder may have stemmed from something he said in the press, but it was totally benign. I don’t remember his exact statement, but it was something to the effect that none of the Cavs was intimidating. He neglected to mention that a couple of them should be in jail for assault! 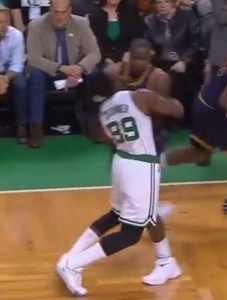 I felt, from the second I saw what Perkins and Smith had done, that the League had to dole-out severe punishments to those two. I wanted them banned for life, actually. I was still shocked that hardly anyone mentioned what Kendrick Perkins had done, because that was sooo egregious to me, but at least Charles Barkley was adamant that J.R. Smith needed to be suspended for at least ten games, with which I agreed. His fellow panelists, Shaquille O’Neal and Kenny Smith, felt that a five game suspension would be adequate. But then Charles pointed-out to them that what those two did were worse than what you usually see in the NBA because they were dirty plays, and hit the Celts’ faces. Good for him to stick to his guns on this one, and, hopefully, make his many fans and viewers see those actions for what they really were.

I was horrified when the next day, idiot former player, Richard Hamilton, who now comments for NBA TV, very ignorantly said, “J.R. just got his arm caught in the cookie jar. I know his intentions was not to hit him.” He knows that? Well I know that his intention, (singular, I might point-out to him, but that’s another topic for another day,) was not only to hit Crowder, but to hurt him! It’s apparent to even the casual observer! The guys in the TBS studios were expressing shock as they watched the thuggish move, but Hamilton said he hoped Smith did not get suspended for even one game!!! Get that guy off the air!

Since I had hoped that both Perkins and Smith would get banned for life, the Leagues’s reaction just made me angrier on Monday than I already was over all this. All Kendrick Perkins got is a fine!!! Are they kidding me?! He walked over with the intent to do just what he did–put both hands around the guy’s throat, and throw him down. Don’t they know how dangerous that is??? And, as Crowder was getting up, Perkins stepped back to him with fists clenched!  He needs to be in jail, not on a sports court! And all this was for no reason whatsoever. Even Kelly Olynyk got more than that–a one-game suspension, to be served during the opening game next season. And J.R. Smith received just a two-game suspension! For knocking the dude out, and ruining his knee! I’m so upset, my hands were shaking as I wrote this! Perhaps the League higher-ups didn’t want to make themselves an issue in the play-offs by totally handicapping the Cavs, but it’s just not right. The suits really wimped-out this time.

Mr. X doesn’t like me to go to hockey games, because of the potential danger of pucks flying into the crowd, but who would have thought that basketball was so dangerous to attend?! (On top of all the intentional violence, nine seats in the front row collapsed when a Cav was pushed into them after all the other thuggery.)

I’ll continue to watch the NBA Play-offs, of course, but now I’m totally rooting against the Cavaliers, a team I had once rooted for quite heavily. Even though I’m far from a Miami Heats fan, I’m glad that LeBron has already won a couple of championships, so that now I don’t have to worry about him anymore. And I’m proud of myself that I always root for the classy San Antonio Spurs. That team is what all men in sports should be.