[Note: Yes, I know I wrote “finalS,” with an “s,” but this is one of the very few cases where the plural of “final” is correct. That’s because we never know just which night is the final one until it’s all over!] 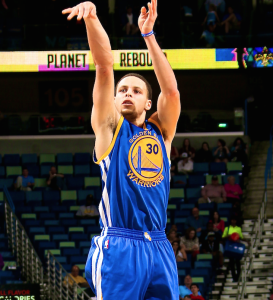 So, the 2015 NBA Finals are finally here! They begin the last best-of-seven series tomorrow night. It’s been over a week since the East and West Conference Finals ended, so many people are over basketball already, but certainly not I.

But I really don’t know why I’m putting myself through this torture. Every time the correct team, (according to me, and fairness,) doesn’t win, I get really sick. No fooling. I can’t sleep, and I’m upset for weeks. (But no worries—I can always still eat!)

So, I’m really worked-up over this series because it’s basically thugs (Cleveland Cavaliers) vs. classy guys. (The Golden State Warriors.) Guess which one I’m rooting for?! I’m already in pain worrying about it.

So, for the nescients among you, here’s the deal, so maybe you can help me root: The Warriors are the #1 team from the entire season. They’re truly wonderful. Their point guard, Stephen Curry, is the 2015 MVP of all of basketball. He looks like a little kid, which makes his on-court feats that much more amazing. It’s part God-given talent, of course, but the guy works his butt off to be the best. 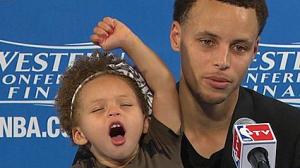 And he’s adorable. (Speaking of adorable, he’s the guy with the pretty little daughter who has taken the post-game press conferences by storm. My mother would have loved her, even though I feel that pressers are not the place for children, really. But Steph handles her perfectly.)

No members of the Warriors play dirty, nor aim to injure the other team. Unfortunately, the same cannot be said of the Cavs. 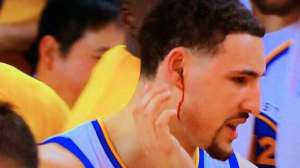 The good news is that the Warriors’ second best player, Klay Thompson, who suffered a horrible concussion in a game a week ago, has been cleared to play tomorrow night. Lucky for him, and his team, that there was all this time between series. The bad news is that it also gave the second best Cavs player, Kyrie Irving, the chance to heal his many injuries, as well. And even LeBron James was banged-up, and needed this time to heal. (LeBron would have to be tied-down in a hospital bed, under armed guard, to miss a game.)

I used to love LeBron, when he was a Cav the first time around, and I can’t help but still have admiration for him. Who doesn’t?! He’s probably the best basketball player who ever lived! But I detest others on his team: The two main thugs, J.R. Smith and Kendrick Perkins, and the dirty snake, Matthew Dellavadova. And LeBron already has two Championships under his belt, (with the Miami Heat,) so I don’t have to worry about him anymore. (If you missed my column on just how despicable those Cavs are, I beg you to read it here, so you know of what I speak: itsnotaboutme.tv/news/basketballkarens-rant-cavs-celtics-dangerous-game-4.)

Oh, and pay attention to the Warriors’ Harrison Barnes. Not only is he an excellent player, but he just turned twenty-three this past Saturday, and he gives the most mature interviews! He also speaks beautifully, and intelligently. I predict he will be a successful sportscaster when his playing days are behind him. (But that’s many years away, knock on wood. I just hope they still have sportscasters then, since so many other conventional things are disappearing rapidly!)

So, let’s all see how this plays out together. I’m rooting for no more injuries, (on the Warriors, anyway,) and may the best team win. (Which the season has already told us is the Golden State Warriors! That’s why I wrote that sentence!)