Trending
You are at:Home»BASKETBALL»BASKETBALL/KAREN’S MUSINGS: NBA PLAY-OFFS 2016
By Karen Salkin on May 2, 2016 · BASKETBALL, KAREN'S MUSINGS

We’ve only just moved into the second round of the NBA play-offs, but I’m already exhausted. (Am I the only one who watches every single game? And the pre- and post- shows?) The action has been amazing. 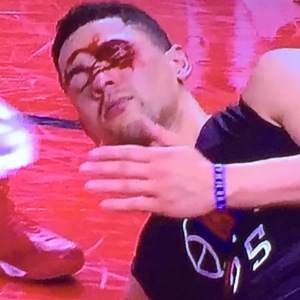 No worries—I’m not going to re-cap it all here for you! I’ll just give you a very few of my thoughts on what’s been going on so far, beginning with the event that inspired me to weigh-in now, way before the Finals.

–Friday night, in the important Clippers-Trailblazers Game 6, Austin Rivers, an important bench player who had to become a starter due to injuries of others, (and the coach’s son, to boot!,) suffered a serious cut to the eye. I’ve really never seen anything like it in a basketball game. He immediately had to have eleven stitches, both over and under his eye! It was really horrific. 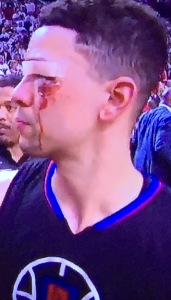 How did they let him stay in like this??? Photo by Karen Salkin.

I felt awful for him, and the team, because both of their stars were already out. (More on that in a second.) Mr. X and I (and I have a feeling his mom, too,–Austin’s, not Mr. X’s,) were sure that there was no way Austin could return to the game. But he did! And he did great! With one eye closed!!! Had the Clippers won, it really would have been because of him.

While it was uber-impressive that he came back, that was just way too dangerous for him, nor worth the risk. Had he been hit in that eye again, (which is always a possibility,) he could have permanently lost his sight! He was amazing to have done it, but it was just way too risky for him.

So, I tweeted: “What a horrible decision to let #Austin Rivers play after his eye injury! Is a win worth losing one’s sight???” And, even though it worked-out okay, I stand by that sentiment. ‬ That was just crazy. I can’t imagine what his dad, Coach Doc Rivers, (one of the nicest guys I’ve ever met,) was going through during it all. He desperately wanted his Clips to win that game, (or be eliminated, as was the case,) and I’m sure he couldn’t have been prouder of his son, (both as a coach and a dad,) but did he really want his baby boy out there, with his eye swollen shut? We’ll never get the answer, but I know the whole scenario must have been terrible for him. 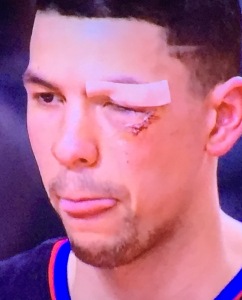 This is how Austin was playing–with that eye basically closed. And he did better than a lot of other players using two good eyes! Photo by Karen Salkin.

–So, now to those other injuries I alluded to, above. I can’t believe how many important ones there have been!!! There are many more than what I’m telling you about here, but the three worst ones might have changed the whole play-off picture. What appeared to be the worst loss of a player is reigning league MVP, Steph Curry of the Champion Golden State Warriors, going down with a bad knee injury eight days ago. He slipped on another player’s sweat on the floor! (Eww.) He’s been out since then, with probably another week to go, but his team is so amazing anyway, that they’ve managed to keep winning without him, which I know many people doubted. (For the record, I did not. I knew they could do it.)

Worse yet was what happened to the LA Clippers in their Game 4. Right after their #1 star, Chris Paul broke his hand during the game, (and required surgery the very next day—I wish I had had his hand doc, because my evil surgeon made me wait three months, writing in pain constantly, to do my surgeries three years ago!,) their #2 guy, Blake Griffin, re-injured his quad, and was out for the rest of the play-offs, (which, for them, turned-out to be just two more games.) And then Austin Rivers’ eye cut happened. Talk about snake-bit! Yikes. 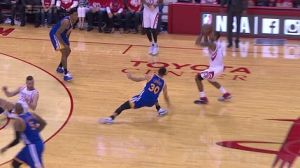 Steph Curry (#30, in the middle) incurring his right knee injury.

–Speaking of Blake Griffin, here’s my little personal story with him, as I wrote in my very first Celeb Sightings column in this e-zine: “8/12/09 Blake Griffin, the newest LA Clipper and #1 draft choice, waiting to board the same plane I was taking back to Los Angeles from NY. We seemed to be just about the only two passengers who American Airlines hadn’t notified about the long delay! I couldn’t believe he was just wandering around by himself, so I popped over and said a quick hello. He told me he expected to see me at the first game of the season, and I said I’d try. But I guess he doesn’t know just what a busy gal-around-town I am! He’s lucky I was exhausted from my month in NY because otherwise, his wait would have seemed much longer, with me entertaining him!” I can’t believe that was already almost seven years ago!!! And I’ve never bumped into him here in LA!

But, all these years on, he’s gotten into some troubling episodes. First, he had a baby with a girl he was dating who was not even his girlfriend. (And she had also had a kid with a different pro athlete. Oysh.) Then he was charged with misdemeanor battery over an incident in Vegas two years ago. And this season, he got suspended for several games, for punching the team’s equipment manager! Who was his friend! Nice, eh? I thought I had raised him better than that!

–And speaking of the Clippers, I do feel sort-of bad for their center, DeAndre Jordan. He is really good, outside of his free throws, that he just can’t get right. Other teams always foul him because they know that he’ll more often than not miss his easy-enough-for-everyone0else free throws. And, he planned to play elsewhere this past season, but his teammates basically held him hostage until he re-signed with them. Disappointing times for him, I’m sure.

The Lakers roster of “Who-are-theys?” Photo by Karen Salkin.

–And, while we’re still on LA, I can’t believe that the Lakers are all strangers now! I’ve rooted against them for as long as I can remember, but when we saw their roster recently, Mr. X asked, “These are who you hate?!” We don’t even know who most of them are! What a sad turn of events; the only emotion I can now muster for them is pity.

–Which brings us to–who I am rooting for! While I do love the Golden State Warriors, and really like their young second round opponents, the Portland Trailblazers, my heart is still with the San Antonio Spurs. They’re the classiest organization in sports. 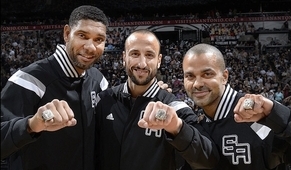 I could not be more impressed with them than in this play-offs.  They play as a true team.  The young ‘uns have quietly taken over for the aging Big 3, (Tim Duncan, Tony Parker, and Manu Ginobli,) but they never make us feel that those old dudes are being put out to pasture.  I always feel that it’s still that trio’s team, which is a great thing.  And the players are always classy, and never thuggish. I’m going to be crushed when those three, (and, bite my tongue, Coach Gregg Popovich,) retire.  Tim just turned forty(!!!), and is still playing great, but, at that age, the writing is on the wall.

Their first game in Round 2 (against the Oklahoma City Thunder,) had me riveted.  Yes, it was a blow-out, but the Spurs were so amazing that I couldn’t look away.  During so many of the games, because I’m always so time-constrained, I do have to multi-task a bit, by writing, or even just surfing the web for news, but not while that one was on. The Spurs took it to a whole other level.

–I really wanted the Charlotte Hornets to beat the Miami Heat, so that didn’t work-out for me. But I have to admit that the prospect of former teammates, and good buddies, LeBron James and Dwayne Wade going against each other in the Conference Finals is intriguing. 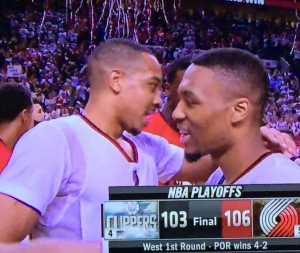 –Young Damian Lillard, star of the Portland Trailblazers, speaks well, and gives thoughtful answers. Of playing the Golden State Warriors in his hometown of Oakland, California, he told the interviewer, “My friends and family don’t always get the opportunity to see me play, since I’ve been in the NBA.  It’s a blessing to be able to go back and play at the highest stage in front of them.” I love that!

–I can’t tell you how much I hate saying this, but I never realized what a dirty player Kevin Durant is!  I’ve always liked him, especially because of his emotional MVP speech a few years ago, where he lauded his mother, but I had never watched him play much.  And I always felt a bit bad for him because he seems so nerdy and insecure in real life. He’s always hunched-over, which denotes non-confidence to me.  But, in these play-offs, I’ve seen him hit, push, and shove his opponents!  Constantly!  I’m in shock over it. He’s even one of the very few who’s received a flagrant foul fine! What’s up with that? Am I the last to know the real Kevin Durant???

And now, let’s get to the really important topics!: 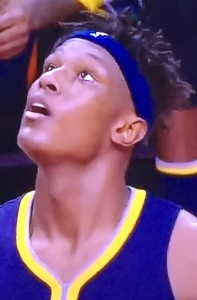 –Myles Turner, of the Indiana Pacers, has perhaps the most gorgeous skin I’ve ever seen! I actually tweeted that “I just want to lick it,” before I realized that that might sound a tad creepy, if you don’t know me.

–I love his teammate, Paul George, and I’m so happy that he’s playing again after last year’s horrific leg injury, (and doing it so well,) but I hate his name.  Does he have a brother named Ringo John?  What were his parents thinking???

–I love when the teams empty the benches in a blow-out, and give the other guys a chance to play, but the announcers need to stop referring to it as “gar-bage time.” That’s so rude, and makes me cringe every time. (And, with so many routs this year, I’ve been hearing it a lot.) 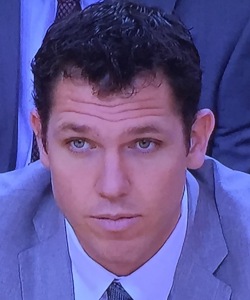 Luke Walton’s beautiful eyes. How did I never notice them until yesterday??? Photo by Karen Salkin.

–And, to end on a good note, congrats to new Lakers Head Coach, Luke Walton. I was never a fan of his, in college or as a Laker, but he did a great job with the Warriors when their head coach, Steve Kerr, was out for half the year. So, maybe with him as the coach, and a blank slate for me with the team, since, as I mentioned above, they’re all strangers to me, I’ll be in the Lakers’ corner a bit next year. And, to be honest, that decision on my part may really be because I finally just noticed how beautiful Luke’s eyes are!!! (Have I mentioned that I’m shallow?)