OMG! I swear–I just got chills, and choked-up, as I shared this very exciting news with Mr. X! (We try to scoop each other with sports news. He got me first on the day I wrote this by telling me that Giannis Antetokounmpo’s little bro, Kostas, just got claimed by the Lakers, but I got the jump on him with this much bigger news. When does a recent NBA legend take a job as an assistant coach??? I’d venture to guess only for the even more legendary Coach Pop!) 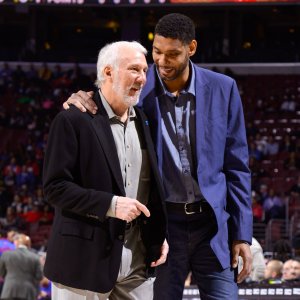 ESPN’s SportsCenter quoted the brilliant San Antonio Spurs’ head coach, Gregg Popovich, as saying, “It is only fitting that, after I served loyally for nineteen years as Tim Duncan’s assistant, that he return the favor.” I love that! (For you non-sports fans, of course Pop was not Tim’s assistant—Tim was the star player and Pop was the coach. But that’s the witticism. Oysh.)

This is soooo exciting! Now the Spurs just may be my team again next year. Let me explain:

Although I never waiver in claiming baseball’s Yankees and Mets and football’s NY Giants as my teams for life, I do it differently for basketball. I always look at the ever-changing personnel before deciding just which team to back each season. Once, in 2008, I even shockingly rooted for the Celtics, (whom I had always hated up to that point,) and they wound-up winning the Championship that year!

And this coming season was going to present my biggest conundrum ever. That’s because so many players changed teams in this off-season. I’ve honestly never seen anything like it in sports! It’s usually just one or two big players jumping ship, like in 2008 when LeBron James infamously “took his talents” to Miami to join the Heat, flat-leaving his hometown Cleveland Cavaliers in the process. But this summer has seen off-the-charts insanity! I had recently told Mr. X that I might have to root for the Oklahoma City Thunder next year because Russell Westbrook seemed to be the only loyal player left in the NBA, and then even he deserted to join the Houston Rockets! What is going on here?! 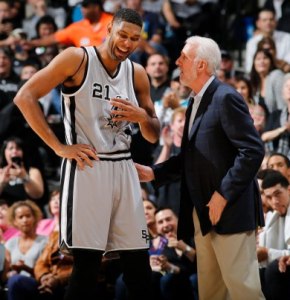 For most of 1997-2016, the Tim Duncan-led Spurs were my team, during which span they won an amazing five NBA titles!!! Wow. When Tim retired from the league in 2016, I still rooted for his former teammates, Manu Ginobili and Tony Parker. So when Manu retired last year, and Tony left for another city (before he, too, just retired,) I was a woman without a team.

But when these recent 2019 play-offs came around, I rooted hard for the Milwaukee Bucks for two reasons: A) It was only fair for them to win the Championship, having the best record for the season, and B) I’m a big fan of their star, Giannis Antetokounmpo, who very deservedly received the 2019 Most Valuable Player Award. But when the Bucks went down to the Toronto Raptors in the East Finals, I had to go with the Raps over the Golden State Warriors in the Finals. And that’s what happened, so I was still triumphant.

But I always had a nagging problem with the Raptors’ star, Kawhi Leonard, because, even though I’m a huge fan of his amazing talent, he had deserted the Spurs in an uber-mysterious way in the 2018 play-offs, which I feel was the cause of them not going far that year. And now, after winning the Championship, Kawhi also left Toronto, so I was at a loss for where to place my basketball affections next season. 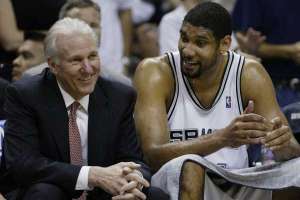 I hope that all Spurs fans will be smiling this much all next season!

Which brings us back to this unbelievably exciting news—the most even-keeled player I’ve ever seen will be back in the sport, only this time helping-out his beloved Spurs from the grown-up side of the bench. And with Gregg Popovich and Tim Duncan teaming-up again, (in their nineteen years together, they participated in the most games by a player-head coach duo in NBA history, with 1,392!,) it will hopefully be great news for my new 2019 team. (And beyond—at seventy years of age, and being the longest-tenured active coach in not only the NBA, but throughout all major sports in the United States!, I have a feeling Pop may retire sooner rather than later. Though that inevitable day will be an extremely sad occasion for all basketball fans, perhaps Tim will even take over then as Spurs Head Coach!)

One last note on this subject. As amazing as it is that Tim Duncan even played so many years to begin with, it’s even moreso that he did all those years with just one team. And it goes beyond that, now that he’s returning to them to coach! Such longevity and loyalty anywhere in the world is rare, but especially in sports. Even the legendary Celtic, Larry Bird, (whose nickname is even Larry Legend,) switched teams after he retired. After his entire career as the star of the Celts, he wound-up in Indiana, where he grew up, first as Head Coach of the Indiana Pacers for three years, and then as their President of Basketball Operations. So for Tim Duncan to return to the only professional organization that he’s ever been a part of is just stunning!