Trending
You are at:Home»BASKETBALL»BASKETBALL: THE MILWAUKEE BUCKS WIN THE WORLD CHAMPIONSHIP!!!
By Karen Salkin on July 26, 2021 · BASKETBALL

I’m sorry this love letter to the Milwaukee Bucks took so long to publish! After all, the team won the NBA Championship almost a week ago.

In a few days, I’ll explain what happened to make this article be a tad tardy. That, and the fact that I had to pay tribute to the Olympics this past Friday, on the day they were finally beginning, a year late! I was on edge that they may not happen at all, so I had to get that column in before this one. 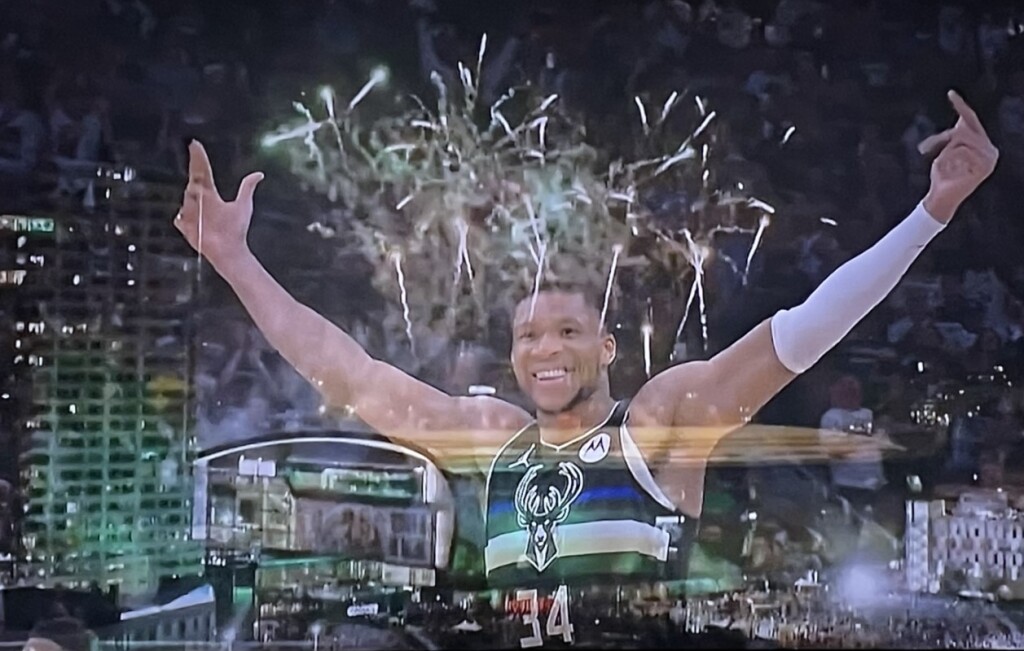 Photo of Giannis Antetokounmpo by Karen Salkin, off the TV, and composed by her.

But now let’s get on to congratulating the Milwaukee Bucks on being NBA Champions now! As the play-offs played-out, I really was far from sure they would win it all. Heck, I didn’t know if they’d even win one series along the way! They had soooo many scares and weak efforts.

First up was the Miami Heat, who beat them badly last year when the Bucks were the number one team in the league! Then they took on the Brooklyn Nets, who were touted as the prohibitive favorites to be World Champions this year. Those guys thought they had built a “super team,” with three stars, and even though I loathe them, this Brooklyn girl very reluctantly agreed with that assessment.

But…the Bucks came away victorious! At the last second–the really last second! In overtime! In Game 7! That win was truly amazing, and one of my happiest moments in sports in my entire life! 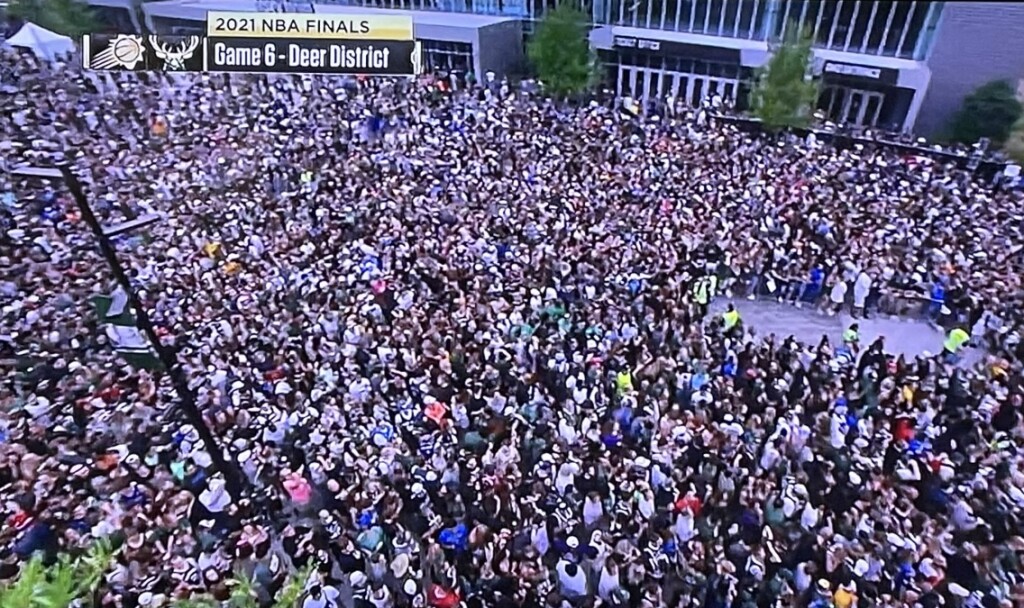 The 65,000 fans watching ensemble on a giant screen outside the Bucks Arena, in what is now termed the “Deer District.” Photo by Karen Salkin, off the TV.

Next up for the Bucks was the upcoming and tenacious Hawks. That was a hard one. Milwaukee’s star player, Giannis Antetokounmpo, hurt his leg really badly in Game 4 of that hard-fought series, and we all thought that was the end. For the Bucks this season and maybe Giannis forever! The injury was that dreadful-looking. But the rest of the team stepped-up and brought home that series victory in six games, shockingly without needing the seventh to get the job done.

And that put them into the Finals against the Phoenix Suns. Actually, out of both rosters, including thirty-six-year-old veteran NBA star, Chris Paul, only one player on both teams combined, Jae Crowder, had even been to a Finals before! That made it extra-exciting for players and viewers alike.

The Milwaukee Bucks has been my team for at least four years now! That’s really because Giannis Antetokounmpo was, and is again now, my favorite player. 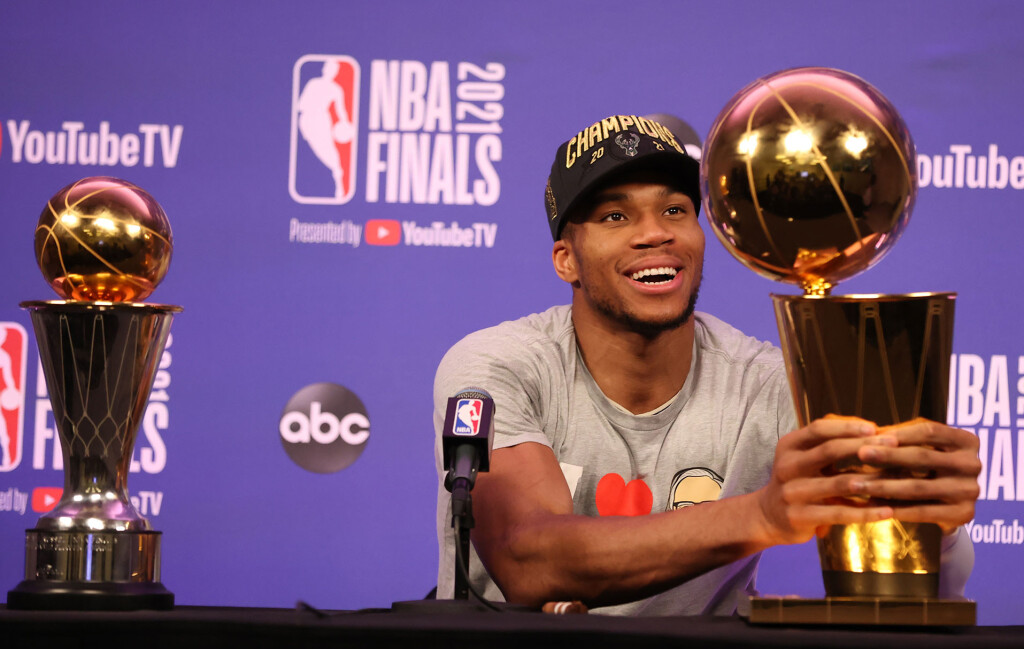 Giannis Antetokounmpo loving the team’s Championship trophy even more than his individual MVP one.

The guy known affectionately as “The Greek Freak” was adorable when he got drafted eight years ago. I’ve always been a fan. And then he slowly became my favorite player, even before he won his first season MVP three years ago. (Season MVP, which he’s received twice, as opposed to Finals MVP, which was bestowed upon him last week when the Bucks won the Championship.)

Giannis held that title (of My Favorite Player,) until the first round of this year’s play-offs when the Dallas Mavericks star, Luca Doncic, moved up to first, ahead of Donovan Mitchell of the Utah Jazz. Hence, Giannis moved down to third for a little bit.

But, watching Game 6 of the Finals, which turned-out to be the clinching game, I said to Mr. X, “If the Bucks win tonight, Giannis will be Finals MVP, but he’ll also win another, possibly more important, title.” And he knew right away that title is “Karen’s Favorite Player…Again!” And that’s what came to pass. 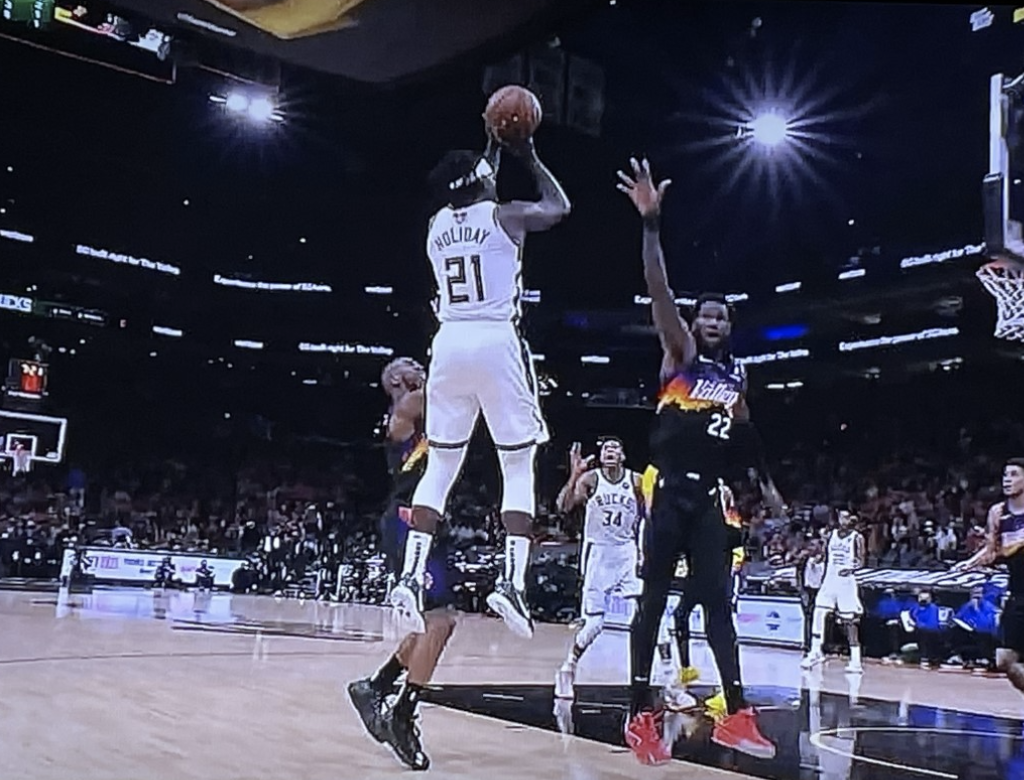 Jrue Holiday. Boy can that guy get up there! Photo by Karen Salkin, off the TV.

But the Bucks are so much more than just Giannis. The team is made up of the hardest workers in sports. Khris Middleton and Jrue (pronounced “Drew”) Holiday, (though both obviously spelling-challenged,) played like the Champions they now are. And Brook Lopez, Pat Connaughton, super-tough PJ Tucker, and crowd favorite Bobby Portis, really came through for the team, as well. The Championship-clinching Game 6, especially, was truly a joy to watch.

And now Khris and Jrue, along with Suns star Devin Booker, are off to play in the Olympics. I’m thinking that that first meeting since the Suns crushing defeat may be a tad awkward. But I’m hoping their mutual goal of Olympic gold will offset any weirdness among everyone on that team, actually—they all wanted to win the NBA Championship!

But here’s the most shocking thing about the Bucks’ victory—Charles Barkley was correct for once on his insane guarantees! He said the Bucks would win the whole thing from the get-go! So get ready, his Inside The NBA cohorts—he’ll be hard to live with next season. And I’ll be loving every minute of it.

One last note on the Bucks incredible 2021win: All sports reporters refer to it as their second championship. But that’s because the franchise won their first one a half century ago! But it’s the first for this current team, and for every single guy on the roster, including their coach, Mike Budenholzer. As I mentioned above, none of them were ever even in a final before, despite them being the best team in basketball for the previous two seasons! 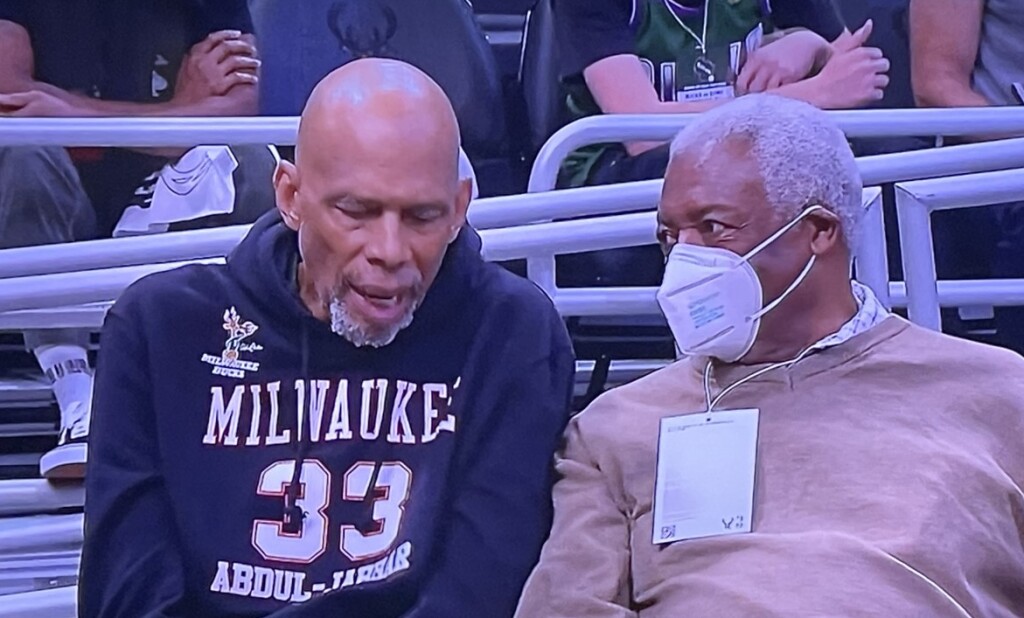 NBA legends Kareem Abdul-Jabbar and Oscar Robertson, the stars of the old school Milwaukee Bucks, who won the 1971 Championship, watching Game 4 in the arena. Photo by Karen Salkin, off the TV.

So there you have it. All that’s left now is for me to once again congratulate my Milwaukee Bucks on their 2021 World Championship. You guys put me through the wringer several times along the way, but I will never, ever doubt you again!

Now go celebrate, in as safe a way as possible. See you all next year. (And by “next year,” I mean in just two months!!! Sports for me never takes a break.)