Trending
You are at:Home»BASKETBALL»BASKETBALL: NBA DRAFT 2016
By Karen Salkin on July 8, 2016 · BASKETBALL

At first, I felt a bit bad that it’s taken me two weeks to weigh-in on the recent NBA Draft. Other things, (read: Wimbledon,) got in the way. [Note: That’s also why there are so few photos here; I just did not have the time.]

But now that the state of basketball for next season has gotten soooo wacky, I’m glad I waited a bit. Every day brings some new NBA shock, like Dwayne Wade leaving his home Miami Heat for the evil Chicago Bulls! (Well, actually, they’re not so evil anymore, now that my most hated player, Joachim Noah, has deserted to the New York Knicks. See what I mean?)

At least, so far, my beloved San Antonio Spurs have stayed intact. Knock on wood. (But probably for just one more season, so we must enjoy them now.)

So, as of right now, I can’t be sure where any of these new dudes will really wind-up, because every day seems to bring another NBA shocker.

The NBA Draft is one of my favorite sporting events of the year, even though it’s not an athletic competition, per see. And it’s not bad that it takes place in my hometown of Brooklyn, New York at Barclay Center, which I watched being built over the years! I love when the announcer says, “Welcome to Brooklyn!”

I loved watching the goony New York fans in the stands.

This appeared to be the nicest, most polite, most grateful group of draftees ever. It was a pleasure to watch them all.

So, here are my brief (and this time I mean it) thoughts on many of the draftees, in order of the proceedings, into the beginning of the second round:

Ben Simmons was adorable, trying not to smile when the crowd cheered him before the announcements even began. I wasn’t even that familiar with him, since his school, LSU, wasn’t in the NCAA tournament, but, when he was chosen #1, I was a blubbering mess! But he grew-up in Australia, so why does he have an urban American accent?! 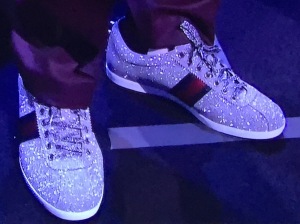 I like Brandon Ingram, so I may have to finally be a Lakers fan. He’s a very sweet kid.

Kris Dunn made me cry the most. He had such a sad upbringing, and now he’s in the NBA. He put his college team name and number on the inside of his jacket, which I loved, but what I loved the most was his shoes! They were sparkly Gucci sneaks! OMG! And it was adorbs that he thanked JC Penney for making his suit.

I hate that I have to be a Pelicans fan now, but I must…because they drafted my favorite college player, Buddy Hield. I love that kid! And, what makes me extra happy is…that he’s a college graduate! I’m so proud of him. (But, as much as I hate to say this, now that he’ll be making money, I hope he can get his buck teeth changed. [Note: Notice I didn’t say “fixed;” I said “changed.” That’s what I wish people had said about my nose back in the day!] I think he’ll feel better with improved teeth structure.) He and his six siblings slept in the same bed growing up! Wow. He said the first thing he’s going to do now is, “Buy my momma a house.” I had to go cry some more after that statement.

Jamaal Murray speaks so well. Good for him! 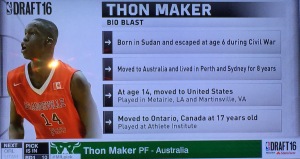 Commentator Fran Fraschilla said 7’1”, 216 lb. Thon Maker has “traveled more than Flat Stanley, and he’s almost as skinny!” I love that reference!!! And I also love the way that Thon speaks, having grown-up in Sudan, Australia, Louisiana, Virginia, and Ontario, Canada.

I love the Sabonis fam! His Russian National Team and NBA retired dad, Arvydas, was more emotional than Domantas! Love that kid. He said that his dad is his idol! Kind-of like me with my mom, so I extra-appreciate him.

NBA Commissioner Adam Silver seemed the happiest for Taurean Prince. They had such a warm, genuine embrace.

I think the most relieved guy was Denzel Valentine, when he was taken fourteenth. He let out more sighs of relief than anyone. I’m happy for this kid. I just hate that this very likable guy will be playing with the the Bulls’ evil Joachim Noah. What’s a fan of niceness, such as me, to do?! [Note: But, if you read the beginning of this column, you know that’s already changed. So, yay!]

[Note: Denzel was the third senior taken in this draft, which is a big deal because that’s the first time it’s happened in a decade. But how sad is it that it’s such a rarity for basketball players to finish college. I don’t know if it’s just because they’re not bright enough, or, more likely, because they want to make that money while they can. I can’t actually blame them because look at the sad story of former #1 pick, Greg Oden. Had he stayed in college, and his knee got as messed-up as it did, no one would have paid for his gargantuan medical expenses to begin with, and, in his sad physical condition, he would have never made the money he did just by being drafted into the NBA.]

Wayne Baldwin IV is beautiful! I never saw him before. But he looked so much better there than he does otherwise, in print and playing. Great nose.

At this point, I have to acknowledge one social phenomenon. There were so many guys there who are mixed race. I love that. My serious boyfriend before Mr. X is black, and, in our college time together, we got so much grief from the world. In the scheme of life, it was not that long ago, so I’m grateful that society has evolved so much. I hope it keeps going. [Note: A zillion years ago, when George Harrison was dating black Ronette singer, Estelle Bennett, and people gave him a hard time about it, he said something to the effect that eventually, everyone in the world would be “freckle-color,” because there would be so many mixed-race couples, so their children would be mixed. It made such sense to me, even as a kid, because that’s the way I always thought it should be–I rarely saw color lines. I’ve never forgotten that. So, it was especially interesting to me to see so many mixed-race young men in this draft.]

I love that the commentators kept mentioning what “good kids” most of these draft picks are. That means they were raised right, which is far from a given these days!

And, before I leave, a big shout-out to Foot Locker for their new ad that features D’Angelo Russell. Even though he ruined the relationship between his teammate Nick Young and Iggy Azalea, it’s good that D’Angelo he can own it publicly like that.

May the best team win next year! (And may that team be the Spurs!)