Trending
You are at:Home»BASKETBALL»BASKETBALL: TIM DUNCAN RETIRES!
By Karen Salkin on July 13, 2016 · BASKETBALL

Say it ain’t so. Please!

San Antonio Spurs star Tim Duncan announced his (semi-surprise) retirement from the sport two days ago. I literally gasped out loud when I read the news, and felt instantly sick. 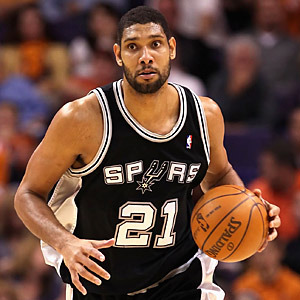 I had just written about the Spurs last week, in my column on the recent NBA Draft. (If you missed it, you can read it here: itsnotaboutme.tv/news/basketball-nba-draft-2016.) I said I was so glad that the iconic team was staying intact, amidst the greatest shake-up in NBA basketball team personnel that I’ve ever witnessed, so that I can still have my favorite team to root for. And now this.

I’m truly sick over it. And this bad news came while I’ve been still trying to rise above Roger Federer losing in the Semis of Wimbledon, a match he almost (and, by all rights, should have) won. That pain was so deep that I’ve been seriously considering giving-up watching sports. I get so upset for these strangers that sometimes I really can’t get over their losses. (It’s not fun being an Empath.)

But I am happy for Tim that he’s retiring on his own terms. He’s forty, for goodness sake! There’s only one other guy still playing at that age, (current fellow Spur, Andre Miller) and he’s a bench guy, who is far from being in the spotlight. 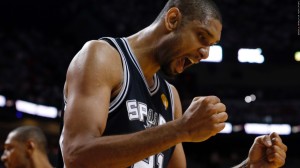 By retiring now, and not after the coming season, there will be no Tim Duncan Farewell Tour. That is just like him to do. Or not do! He wants to go out with no fanfare. I’m sure that I’m not his only fan who wanted to see him get feted in every NBA city, so to be deprived of those festivities makes me a bit sadder.

But I’m happy for Tim. He’s leaving on his own terms, just as he played on them.

He’s one of the greatest basketball players we’ve ever had the privilege to watch—for nineteen seasons!!!

Here are just some of Tim Duncan’s major NBA accomplishments:

–He spent his entire nineteen-season career with the Spurs! It’s beyond rare that a player stays with just one organization forever. He’s like the Derek Jeter of basketball! (The only other two players to have done that are John Stockton with the Utah Jazz, and the winner, Kobe Bryant, who just retired after twenty seasons with the Los Angeles Lakers.) 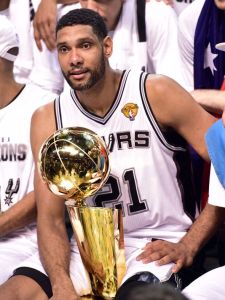 –He was the #1 draft pick in 1997, and has totally lived-up to those expectations.

–During Tim’s time there, the Spurs had a regular season record of 1,072 wins to just 438 losses, which gives them a .710 winning percentage. That’s the best nineteen-year stretch in NBA history! (It’s also the best among all the other major sports leagues—the MLB, NFL, and NHL—during that same period of time.) 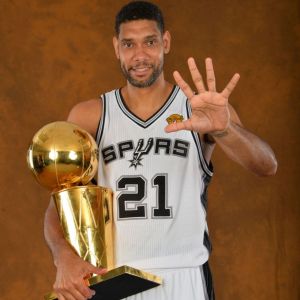 –He helped the Spurs reach the play-offs in all of his nineteen seasons with them.

Tim Duncan has oh so many more career achievements, but I didn’t want to bore any of you. (For those of you who are interested to read about them all, the stats are so easy to research.) 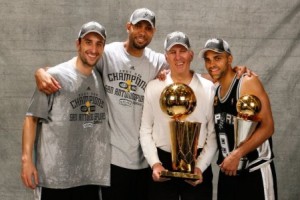 So here are the last two, which I really love, because I’m a sucker for great team camaraderie: Tim and his two other long-time teammates, starter Tony Parker and sixth man Manu Ginobili, have the NBA record for most wins by a trio in both the regular season (575) and postseason (126.) And Tim and his amazing Spurs coach, Gregg Popovich, have the most wins (1,001) by a player-coach duo in NBA history!

So, can you see why I’ll miss Tim Duncan next season?! 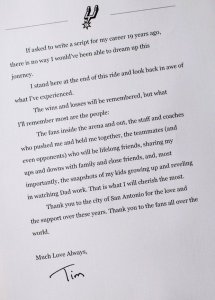 Tim Duncan’s classy “farewell” note to his many fans.

But, I have to buck-up and wish him the best going forward. I’ve heard that he’s a great dad to his two children, so this should give him some more time with them. And, since he speaks so well, I’m hoping that maybe he’ll become a commentator. I’d love him to replace Shaquille O’Neal on Inside The NBA, because a) I can barely make-out a word Shaq says, with his weird voice, and b) Tim would never even try to funny, which would give my beloved Charles Barkley more to work off.

Have a great retirement, Tim! I’ll try to forgive you soon for breaking my already-fragile sports heart.