I’m wrapping-up my coverage of the recent SAG Awards with my thoughts on the arrivals shown on the E channel. This is how unimportant the media thinks these awards are—E is the only channel covering the walk-ins live, as opposed to at least four for the Oscars and Emmys.

I’m sharing these separate from my review of the actual awards show, so that neither article would be too long for you to read at one sitting. (If you missed the previous one, you can still read it here: itsnotaboutme.tv/news/awards-show-2018-sag-awards.) 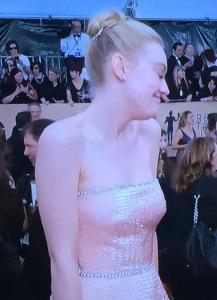 White as a ghost Dakota Fanning. You’ll have to scroll down to see what award I gave her. Photo by Karen Salkin.

And, in full disclosure, I didn’t watch the arrivals live; I actually wound-up watching them the next day, because they were on against the football play-offs, and you know I wasn’t going to miss sports!

So, here are my thoughts, in the order they appeared on the arrivals show. The two hosts—that Rancic woman and a new one, Nina something-or-other, were as bad as can be. And, on top of their inanity, (like Nina talking non-stop and over everyone,) there was one extra correspondent who said hi near the top of the show, but we never saw that girl again! Did she appear on camera just to tell us their position on the red carpet?!  I don’t get that.

So here goes with what happened on E as the guests arrived for the SAGs, with the second incident being one of the worst things I’ve ever seen on one of these shows!:

The interview that the Nina woman did with the two boys from Stranger Things was beyond uncomfortable!

OMG—How c-wordy of that Rancic bi-atch to ask adorable Allison Brie, who’s married to Dave Franco, her thoughts on the accusations against her brother-in-law James Franco, and word it that she should enlighten us because she’s also “a supporter of the TimesUp movement!”  Rancid (as I now have to call her) absolutely sabotaged that poor girl on what should have been a wonderful night for her!  Ugh.  I used to have only disdain for that skin-and-bones woman, but now I absolutely loathe her for doing that! 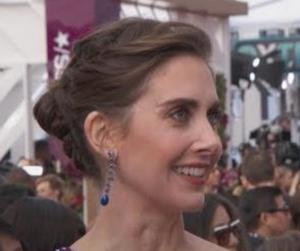 Alliosn Brie went from this happiness… 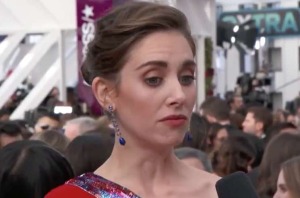 …to this face when that Rancid person asked her the most inapporpriate question on the red carpet!

But now I adore Allison Brie!  I had never even heard of her before The Disaster Artist, but, even though her happy face and demeanor totally changed when she heard that unbelievably crass question, her reply was spot-on and thoroughly composed. You go, girl! 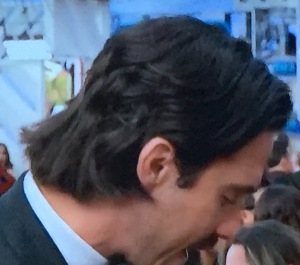 I never cared about him one way or another, but Milo Ventimiglia seems like such a sweet, nice guy.

But what was up with his hair? The back looked like either a bad wig or awful extensions. It was very weird.

Rancid asked new-ish actress Kelly Marie Tran, who she wanted to meet that night, and her dumb answer was Oprah, who wasn’t there and was not even due to be there!

That Nina woman was so rude to Jason Clarke of Mudbound.  She asked, “How do you feel about [something] because Mudbound has really struggled…,” and then when he was talking it up, she rushed him off. So the question about his “struggling” film was rude, and then it got worse for him! I hope this Aussie doesn’t think all of us Americans are like that! 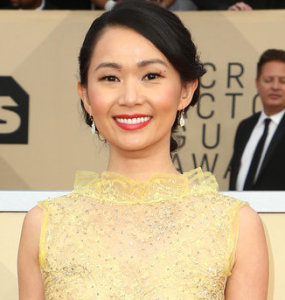 I was so happy to see that Hong Chau is as lovely as I had hoped. And all her red carpet posing was adorable, not full-of-beans, as most others are.

This was a tad weird, though–Hong looked so much older as herself than she did in Downsizing.  Either the movie had great make-up people, or Hong doesn’t!

Sam Rockwell’s annoying girlfriend, Leslie Bibb, totally hijacked his interview!  We wanted to hear what the nominee and eventual winner had to say, not her thoughts on his recent Golden Globes win. Someone needs to tell that woman that it’s not about her!!! 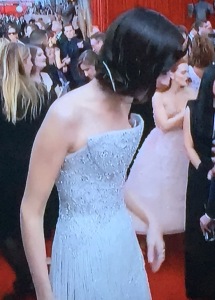 I’ve never seen Stranger Things, and did not think I’d like Millie Bobbi Brown, but she named the following as her top three acting inspirations: Audrey Hepburn, Angelina Jolie, and Jodie Foster, so now I have to admire her; that was so astute of a young girl to come up with that impressive list on the spot like that.

I give Holly Hunter so much credit for speaking intelligently during this red carpet baloney!

Allison Williams could not have looked worse.  The make-up, her filthy hair that was trying for some flapper-type ’do that did not work, and the ill-fitting dress, paired with her terrible slouching posture.  Yuck.  And that horrible nasal voice was the icing on the crap cake.

I love classy, adorable Margot Robbie.  That girl cannot look bad no matter what she does.  Her hair was sort-of a mess, with no special style, but she still looked beautiful. (But why does she never smile on red carpets?)

It’s so weird to see previously adorable Goldie Hawn with the same cutesy visage she’s always had, but all wrinkled and haggard-looking now.  It’s sort-of sad.  But that’s what happens when you live at the beach, I guess. (Or, perhaps more accurately, make it into your seventies!) [Note: That’s Goldie and her daughter Kate Hudson in the big photo at the top of this page.]

I met Bob Odenkirk a few years ago, and had no idea who he is.  We sat next to each other in an audience of a magic show, and I asked if he was in Nebraska. I had no idea that he had ever done any other work! It turns-out that he’s been working forever, just not on any shows I watched.  He could have listed all his other credits to me, but left it at the one I had asked about. He was at that show alone, just to support a friend, who was one of the magicians who was so fabulous that he didn’t even need anyone there. But there Bob was. Listening to his interview on the red carpet at the SAGs, I was so glad to see that he’s still the same good guy whom I met.

And Laurie Metcalfe is as nice as I had hoped, as well. 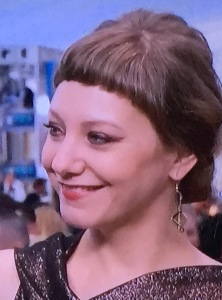 What is this hair-do on Emily Gordon?! Photo by Karen Salkin.

This one I hate to say, but Kumail Nanjiani’s co-writer wife, Emily Gordon, is already—how shall I put it?–not exactly a looker, so why would she wear her hair like that to make it worse?! She had some sort of very short bangs, but it was even more severe than that. Why wouldn’t she try to look as good as she can? I never get that, about anyone.

But they are a very cute couple, and I root for them. (I even hope they win an Oscar for their script.) And I give them sooo much credit for writing their fabulous film, The Big Sick.

Nina took the mike away from every-award-this-season frontrunner Gary Oldman as he was answering her question!!!  How awful of her. That offense is unforgivable!

Olivia Munn told a story about Sandra Bullock being so nice, and I had the same experience with her! Way back in the day, she and I were finalists for the lead role in a TV show, (that turned-out to be awful, without us, of course! And, by the way, the role was to basically play me! That’s what the script even said! And I didn’t get it!) I had to go in after Sandra, and I was sick, which everyone could tell. She stopped to talk to me about it, which, trust me, girls who are up for the same role never do! She was already a tiny bit successful at the time, so she could have been uppity about having to read for the role, but she was the opposite. So I loved hearing Olivia’s story about her, as well.

But, of course, even though Olivia was telling real person, fun stories, that Nina person cut her off.

How skinny is Nicole Kidman?!  When I was a young starlet, everyone made such a fuss about how skinny I was, because no one else was back then, but now I’m a tad chubby while everyone else is a rail!

That Rancid woman asked Mary J. Blige, “What do you mean by, ‘This is a really great time?’ ”  What did she think she meant??? As she herself had just mentioned at the top of the interview, Mary was a double nominee at the SAGs!!!  What an idiot!

Mary J. Blige is so honest, sincere, and not at all full-of-baloney!

Then Rancid asked her, “What was that like?,” referring to that Mary had just received a star on the Hollywood Walk of Fame.  Without skipping a beat, Mary answered, “It was like being high.” Love that honest answer!!!

The winner for Most in Need of a Tan is paleface Dakota Fanning. 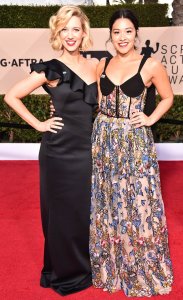 I love that Gina Rodriguez brought her co-star, and nemesis on Jane The Virgin, Yael Grobglas, with her.  And Yael really was the classiest-looking one there!

But Nina left her just hanging there for the whole long interview of Gina! She didn’t ask her even one question or include her in any way. How incredibly rude!

One final thought here: I read elsewhere that people were upset that Rancid and Nina were basically dismissive of the very few Asians on the red carpet. (Hong Chao, Olivia Munn, Kelly Marie Tran.) I understood exactly what they’re talking about. The E hosts are always totally insensitive, while thinking they’re asking the profound questions. Enough of them already! That channel needs to hire new people, pronto. But they never will.

Okay, that’s it for the arrivals. Now on to the Grammys this Sunday! (Am I the only one who thinks these awards shows are too close together? We audiences, and journalists, need a break in-between, don’t ya think???)

By the way–I am planning on live-tweeting the Grammys again, so you might want to follow me before then, if you don’t already. @MajorCelebrity. And then my full review will be published on here next week, so keep an eye out for that, too.